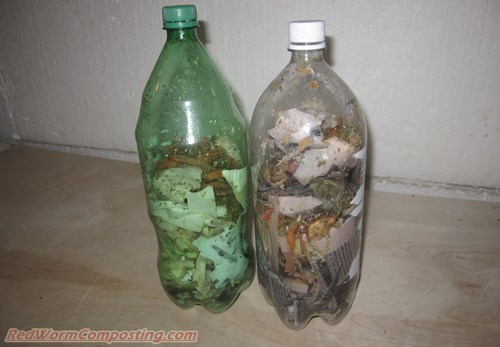 As I wrote recently, I’ve come up with a new approach for dealing with my scuttle fly invasion. My beer trap has worked reasonably well, but I thought I might be able to kick things up a notch if I REALLY gave the flies what they are after – stinky, rotten waste materials.

I’ve noticed that they can really pick up pungent odors quickly/easily and it always seems to draw them in right away. It certainly doesn’t need to be rotting materials either. One night when we ordered pizza I noticed a fair number of them suddenly in the area where the pizza boxes were sitting. Another time it was a similar experience shortly after opening a can of tuna. So, I figured why not put these sorts of materials in plastic bottles and punch some small holes in them.

Naturally, this idea seems ludicrous at first glance (and that’s likely why a reader recently dubbed them as “slop traps” and warned me to steer clear of the idea). I mean seriously – it’s like I’m creating the ultimate breeding grounds for these flies!
😆

True enough – and I suppose if I just left these traps to sit indefinitely that’s exactly what would happen. But the second part of this strategy – the KEY part – involves putting the traps in my chest freezer, daily, for at least a few hours at a time (I tried 1/2 hour or so, and the flies bounced back to life in seconds! lol).

So far so good. As I suspected would be the case, I’ve been luring in a LOT of scuttle flies! Each trap has very small holes – big enough, apparently, to release plenty of smell for them to detect (but not so much that I can smell it), yet small enough to keep them at least temporarily contained.

A couple of things I’d like to try with future traps (and yep I’m just gonna keep making these things as long as I’m able to find containers – and as long as my scuttle flies persist) are:

A) Smaller holes, and fewer holes (going to try adding only 1 or 2)
B) Perhaps adding some diatomaceous earth to the mix – I think this might help to kill off some of the flies before they get frozen (since they like to run around all over the place, the little sharp fragments of the DE should cause damage).

At the risk of seeming a little (or a lot) twisted (lol), I’m actually having some fun with this whole experience! Like I’ve said, these flies aren’t nearly as annoying as fruit flies – and it’s cool that I’ve already hit on some strategies that actually seem to work!

I’ll be sure to keep everyone posted on my progress!
8)

P.S. I think a similar approach could work VERY well for fruit flies as well – again, it would be the freezing that would likely be a crucial component (although liquid traps set up with pop bottles would likely work really well also).