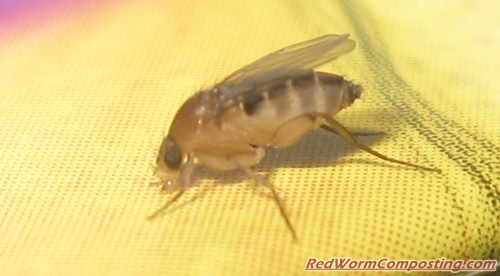 I recently mentioned that I’ve been having a bit of a pesky fly situation in my indoor worm bins – which has led me to take a cautious approach with my new VB48. For the life of me I couldn’t figure out what type of fly I had – but I knew they were something I hadn’t encountered before. For one thing, I was finding them all over the place – including our kitty litter boxes! But, they also exhibited some weird behavior.

They reminded me of giant fruit flies (Drosophila sp., that is ) – yet they seemed to do more running around than flying. I also couldn’t seem to trap them in my cider traps. Finally, late last week I figured out what they are…

I’m even pretty sure I know what species I have – Megaselia scalaris. This seems to be one of the more common/widespread varieties of Phorid flies, and the image on the Wikipedia page is spot on.

Reading the various descriptions of scuttle flies I came across helped to strengthen the concerns I already had. For one thing, their complete lifecycle (time from eggs to adults) – while not nearly as fast as that of fruit flies – is only around 20 days or so. This seems to be on par with fungus gnats (and we know how much fun they can be! lol).

Probably more alarming, though, is the fact that the larvae are more opportunistic in their feeding preferences (than fruit flies) – being comfortable with consuming a wide range of decomposing organic matter. In other words, once these guys are established in composting systems, it’s likely going to be a lot more difficult to get rid of them. 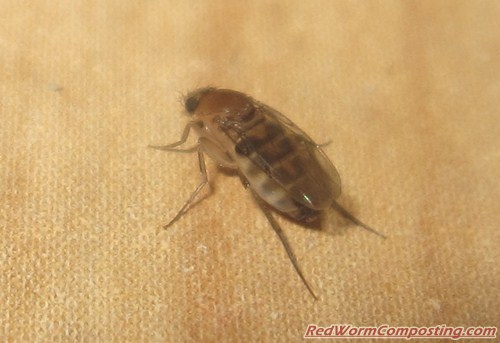 These flies can apparently be pests in mushroom growing operations. I came across some articles mentioning attempts to control them with parasitic nematodes (Steinernema feltiae), but the consensus seemed to be that this approach was only moderately effective, at best.

Nevertheless, that does at least give me a place to start. I placed my order for more S. feltiae on Friday, and they are scheduled to arrive tomorrow!
8) 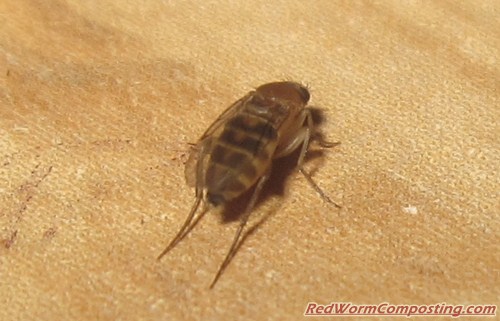 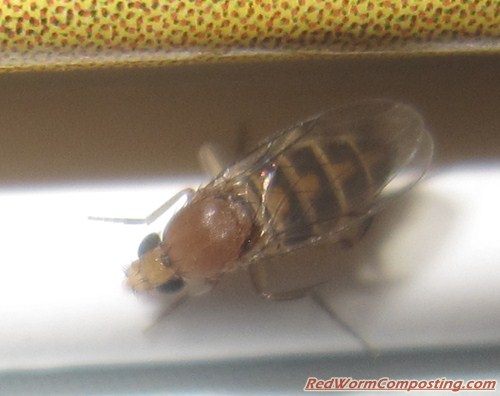 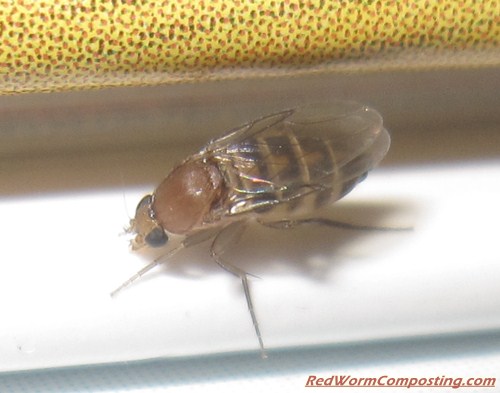 I’ll admit – Megaselia flies do actually have a few things going for them.

1) Like I said, they tend to “scuttle” when disturbed, rather than fly off. This, combined with their larger (than fruit fly) size makes them an easy target for the “swat team” (yuk yuk). It also makes them FAR less annoying than fruit flies (no clouds of them in your face when you open your bin).

2) Their larvae and pupae are much larger, and thus easily found in your system. This makes it easier to physically remove them, and to just generally to determine how badly infested the system is.

3) The adults are active feeders, so my hunch is that I can come up with some sort of effective liquid trap for them. A lot of Phorid fly adults feed on sweet liquids – so I may try honey and/or maple syrup, molasses etc. Megaselia adults are reported to feed on various protein-rich liquids as well, so I may try something like a yeast suspension. 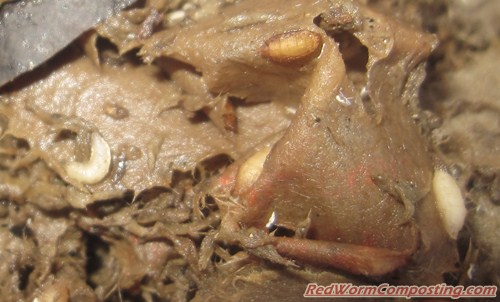 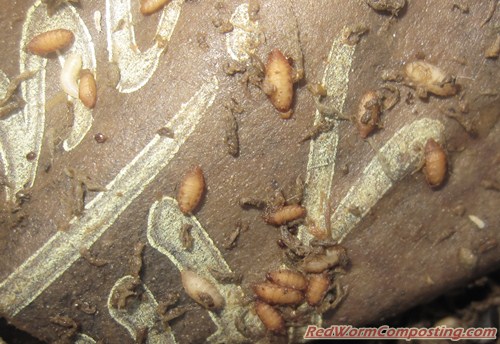 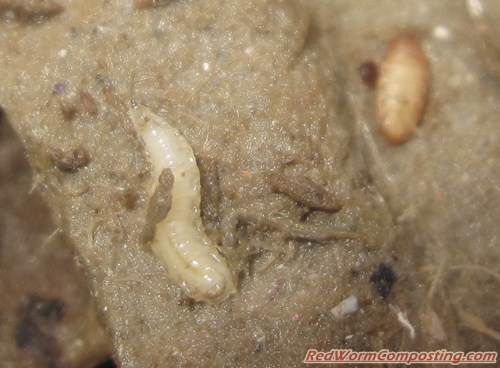 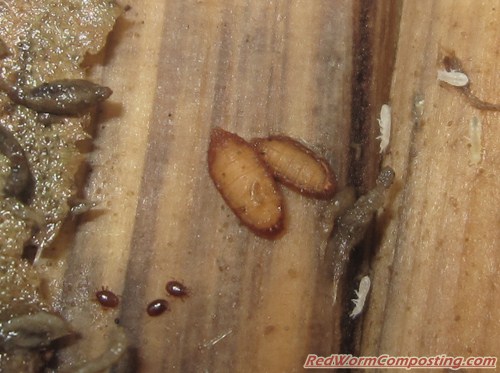 According to Wikipedia, there are about 4000 known species of Phorid flies, including the “world’s smallest fly” (0.4 mm), and the “ant-decapitating fly”, Pseudacteon – which offers some promise as a biological control agent for fire ants (I can almost hear the cheers of all you southern vermicomposters! lol)!

My primary focus right now is on making sure my VB48 doesn’t become overrun with these guys. I ended up stocking the bin with worms earlier than planned (will write more about that in my next VB48 update) largely due to the fact that I want my worm population to help keep the flies in check (by competing with the larvae). Ironically, by adding the worms I also added a culture of these flies, since they had invaded the two bins I dumped into the VB48!

Seems kinda counter-intuitive (or just plain DUMB! lol), I know, but I still think I can keep them from getting out of hand if I let the worms go crazy in their new home right away. One of the downsides of letting any system “age” is that it can be a prime opportunity for other critters, such as fruit flies, to become well-established.

Anyway, now that I KNOW what I am dealing with here, I feel a lot more mellow about the situation, and a lot more optimistic about my chances of keeping these pesky critters under control. Worse case scenario, the experience will at least help to educate my readership about these flies!
😆