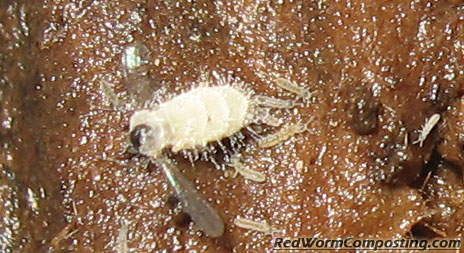 Back in April I wrote about a ‘fungus gnat invasion‘ in my wooden stacking vermicomposting bin. Well, ever since the first outbreak of gnats I have been trying to stay patient as they’ve proceeded to set up shop is pretty well every indoor bin I have.

My wife has been fairly tolerant of the gnats that have managed to make their way upstairs, but I knew something needed to be done prior to having my mother-in-law come to stay with us for a little while. As mentioned in my creepy pants wrap-up, it’s not that she gets offended by these things – it’s more a matter of trying not to look like a complete slob (difficult enough as it is when you have a vermicomposting operation in your basement!).
😆

As I’ve written before, fungus gnats (Bradysia sp) are unbelievably difficult to get rid of once they’ve become well established in a worm composting system. As bad as fruit flies can be, I actually find them much easier to deal with, since they can be trapped quite easily, and are reliant on certain ‘foods’ to keep them going – once these are exhausted, the population tends to crash. Fungus gnat larvae on the other hand thrive in most vermicomposting systems – especially those that have been active for at least a few months – since they are nice and moist, and offer a wide array of decomposing organic matter to keep them well fed.

Nevertheless, I decided to try out a different biological control this time – predatory nematodes, Steinernema feltiae. I felt a little more optimistic about them simply because each batch contains millions of them, and every time they attack a fungus gnat larvae many more nematodes get produced.

As soon as the nematodes arrived last week I mixed them up with water, and applied them to my indoor bins. Basically they work like little larvae-seeking-missiles – once they track down fungus gnat (or other fly) larvae, they penetrate their body and release a bacterium which does the actual killing. The nematodes then reproduce like crazy and basically burst out of body of the host, before venturing off to find another target.

I knew that even if the nematodes did end up controlling the gnat population, it would likely take some time before I observed an significant results. Still, I’ve been keeping a close eye on the bins to see if I can find any signs of gnat destruction. As picture above demostrates, I have indeed found evidence that the nematodes are working. What’s interesting is that while the nematodes are supposed to attack and kill the gnats while they are in their larval stage, I have been finding a lot of adults that seem to be badly infected, or dead (as in the photo). I suspect that they were invaded shortly before becoming adults and still managed to pupate, only to then die shortly thereafter.

I am still seeing quite a few adults flying around, but the stacking system (which was a serious fungus gnat hub) seems to have far fewer gnats crawling out of it now. I am optimistic that my overall population of gnats in the basement will be greatly reduced within the next couple weeks. I actually still have some of the nematodes (in water) sitting in the fridge – they apparently last for a couple weeks. I will likely apply them again to certain (badly infected) bins, and I also want to conduct some tests.

These nematodes are reportedly effective fruit fly predators as well – something I want to see for myself. I have a nice healthy population of fruit flies in a couple of my outdoor composting bins, so I’m going to lure some of them into small bins containing fruit scraps, then apply the nematodes to one of the bins to see if they have any effect.

As per usual, I will certainly keep everyone posted!