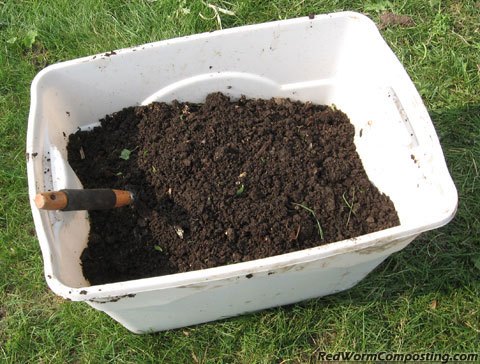 A big ol’ tub of ‘black gold’, ready to be put to good use

For whatever reason, when I first built my backyard worm bin I was a little too intimidated to try adding a compost harvesting door. After all, it was a pretty major accomplishment for me to even be able to build such a bin (I’m no handy man), so I didn’t want to push my luck. Looking back, I just have to laugh since I now realize how simple it would have been to install the door at the time.

In some ways I am glad I didn’t install it however, since it might have tempted me to start harvesting the material a lot earlier, and I wouldn’t have the huge supply of it now – a time when I actually need it! As I’ve mentioned in a previous post, this year I am receiving large quantities of food waste from a local restaurant (going to finally write about that very soon), and I have also started my own composting business. As such, it only make sense that I should demonstrate the benefits of using vermicompost in my own gardens – something I really haven’t done up until now. 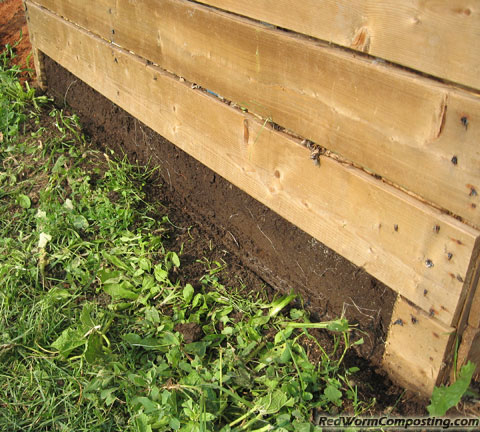 After cutting out the first panel I could see the rich vermicompost just begging to be harvested!

The actual process of making the harvesting door simply consisted of me cutting out two pieces of board, connecting them together, then re-attaching them with hinges. Easy peezy!

Aside from the heaps of beautiful compost in the bottom of the bin, I was blown away by how many little tiny (undoubtedly malnourished) Red Worms there were – so the benefits of harvesting were two-fold. I simply left the material out in the sun and gradually scraped away all the vermicompost while the worms continued to dig down. Eventually I was left with a big writhing mass of worms at the bottom. They all went into an indoor conditioning bin where they will be re-hydrated and fattened up with good food – I’ll likely end up with multiple times the weight in worms harvested when all is said and done. I’ve already noticed that the level of materials in the big indoor bin is going down very fast, so there must have been a LOT of worms.

By the way – I actually also found a couple of the European Nightcrawlers released into the bin after their (indoor) bin went sour. I didn’t think I’d ever see any of them again. I have little doubt that there are a bunch more in the vermicompost not yet harvested. 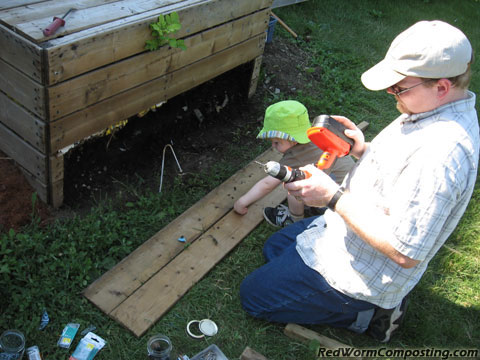 I made my compost door construction into a fun family event – ok, so my brother and nephew did all the work! 😆

It’s been really cool having so much vermicompost on-hand. I feel spoiled! At first I was very conservative with my use of it, since I’m so used to having small amounts produced in much smaller indoor worm bins, but I’ve gradually gotten used to the fact that I have a LOT – and plenty of great opportunities to put it to good use (I will talk about using worm castings in another post).

I suspect the mass of material in my big bin is going to start settling pretty soon, which as mentioned, will likely be the end of my compost bin crop of potatoes and tomatoes! The upside is that it will free up more space for fresh materials up above.