I’ve decided to call my VermBin48 “The Beast” (yep, I’m that cool! Even cooler when you consider the fact that “The Beast” is decorated with a rainbow of pastel colors). As I may have mentioned in my last VB48 post, this is the largest indoor system I’ve worked with, and I think it might have the potential to get a little unruly or even out of control if I’m not careful!
😯

Part of the reason I’ve been dragging my feet a little in terms of getting the system up and running is that I’ve been dealing with a new (and somewhat frustrating) fly pest in my indoor bins. The last thing I would want to have happen is for the new VB48 to become infested with these things before I even get the chance to stock it with worms!

The show must go on, though – so yesterday I finally decided to really get things rolling. I should mention that prior to yesterday I had been continuing to shred up newsprint and cardboard for the bin, so I had a nice thick base layer of these materials.

Since I have access to lots of fall leaves these days, I decided that would be a great material to mix in with the paper wastes. These older brown leaves are essentially like a “living material”, helping to inoculate the bin with lots of aerobic decomposer microbes, thus helping to kickstart microbial activity in the system. The worms just generally seem to love old leaves (likely due to all those microbes), so there will certainly be some food/habitat value as well. 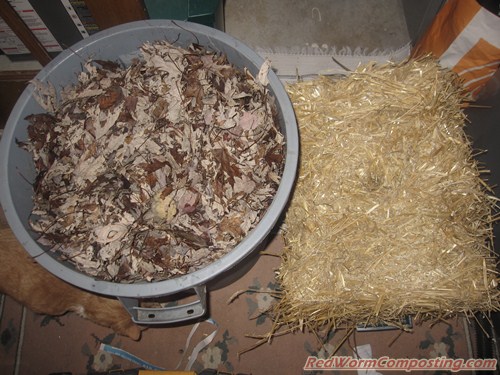 For my initial “food” supply (apart from the leaves) I decided to use three spaghetti squash (from my garden) that were no longer fit for consumption. 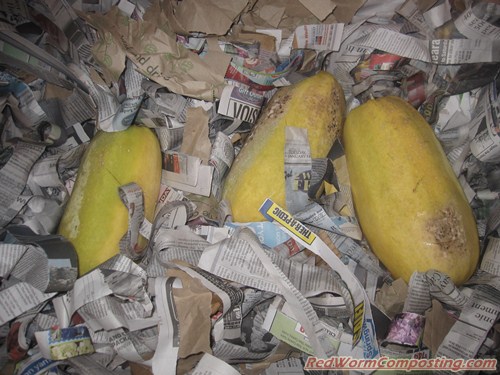 Of course, I wasn’t just going to leave them the way they were. It was important to “optimize” the material for microbial invasion. So, I had some fun (perhaps too much fun) chopping them up with a knife! I was actually surprised by how effective (and fast) this approach was. 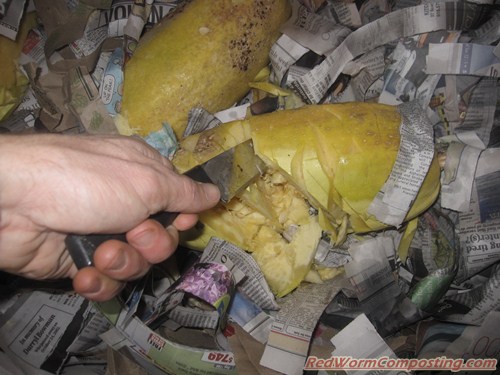 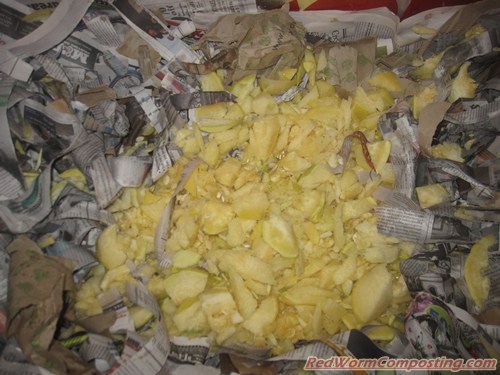 Once the squash were chopped up well, I made sure to spread them around in the bedding a fair bit.

Next, I added a small garbage can full of brown fall leaves, collected from the heap still sitting out on my lawn (originally raked up for the kids to jump in). I made sure to grab most of them from the lower reaches of the pile where there is more moisture – and likely more microbial activity. With the leaves added, the overall level of material in the bed was up quite close to the top – but I still had plenty of room for one last (important) material…Straw!

I wanted to make sure I had a really thick layer of it so as to help keep fly invasion to a minimum, and to help keep conditions down in the composting zone as moist as possible. 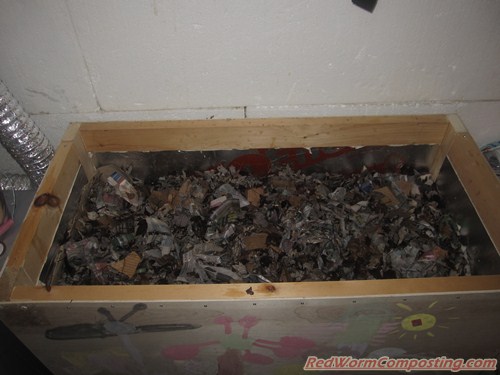 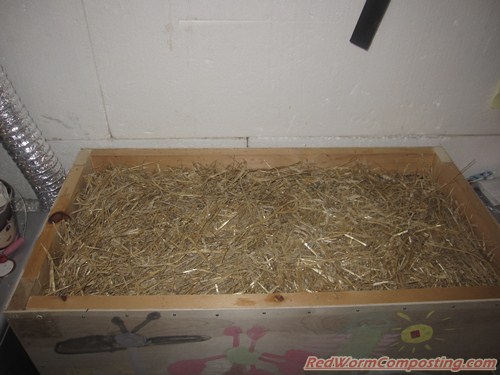 Speaking of moisture, the “twist” I’ve decided to add to this project (you know me and my “twists”! lol) is the use of European Nightcrawlers – and perhaps even a mix of Euros and Reds a bit later on. Normally I recommend that people DON’T use Euros in flow-through systems since they prefer a habitat with a higher moisture content, and they tend to hang out near the bottom of whatever system they are in. But what better way to really test this out than with my new VB48? Should be fun!
8)

The combination of thick false bottom, water-impervious insulation walls, and thick layer of straw over top should definitely help to make the system a lot more Euro-friendly.

We shall see, I guess!

After setting everything up, I tracked down my short-stemmed compost thermometer and inserted it into the upper straw layer (pushing it down a fair bit so as to get close to the composting zone). I am very interested to see how warm the system gets over the next few days. Initially, the reading was about 15 C (59 F) – but when I took a picture this morning it was starting to creep up closer to 20 C (68 F). 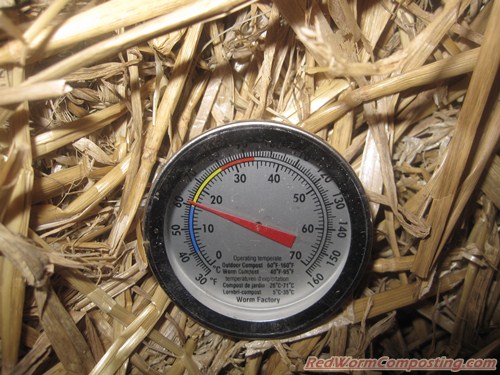 I added some alfalfa powder (crushed alfalfa cubes) this morning, along with another good dose of water – so I think that will definitely help to get things moving along even faster.

As for the worms – I won’t likely be adding them until sometime towards the end of next week. I definitely want to make sure the habitat is suitable for them (nice and moist, not overheating etc) – so I don’t mind being patient.