When I checked on my plastic “follow-along” bin yesterday, I decided it was a good time to also check on my WF-360 Euro system.

As mentioned in the plastic bin update, I’ve ended up with a bit of a fly situation down in my basement this fall so I’ve been very cautious with feeding (and really haven’t done much at all for the last couple of months). I wasn’t too surprised, then, to see that the level of material in the bin had dropped a fair bit, and that the bedding down below looked fairly well-processed. 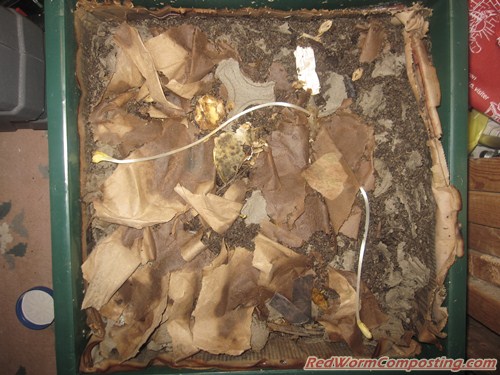 What DID however surprise me was the fact that I hardly found ANY worms down in the reservoir – other than a few tiny juveniles. I thought that there would definitely be quite a few adults down there by now given the tendency of Euros to move downwards in a system, along with the fact that they don’t have much food. I guess, food or no food, the moist habitat zone in the tray is preferable to the environment down in the reservoir.

Similar to the Reds in the plastic bin system, the Euros don’t seem to be any worse for wear in spite of not being fed very much since they were added. Yet another testament to the fact that a neglected bin (assuming minimum requirements are being met and hazards are being avoided) is often going to do better than one that’s over-tended.

Still, I DO want to continue moving forward with this project and (hopefully) add a second tray before too long – come flies or high water!!
😉

Yesterday I got things rolling again by adding some coffee grounds (with a bit of food waste). We shall see how things go from here.
Stay tuned!