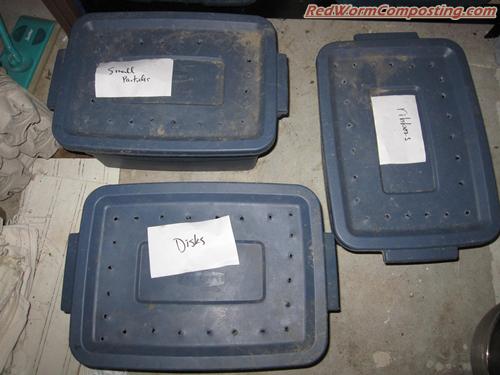 It’s been a couple of weeks since my last particle size experiment update. Not long after writing my last post (see previous posts listed below) I purchased a 10 lb bag of carrots and prepped them for use. I opted to create only “disks” and “ribbons” – producing roughly twice as much of the latter – since I figured it would be pretty easy to grind up the ribbons further (for the fine particle treatment), using a blender, just before adding them. I chose to stick with my freezing approach for storing all my chopped/peeled material. While I agree (with someone who commented on the last post) that the best comparison would have involved using fresh materials – since freezing effectively starts the structural breakdown process, thus helping the microbes and worms – it’s a LOT easier (and less time consuming) when I can do most of the prep work all at once.

After leaving the disks and ribbons in the freezer for a number of days I decided to do another feeding. This time I opted for 500g of carrot (as you may recall it was 350g that was added when I first set up) since I wanted to make sure there would be PLENTY of food in these bins. Adding the disks and ribbons to their respective bins was very easy (after letting the materials thaw out over night) – but blending up ribbons to create fine particles turned out to be a bit more of a pain than I had anticipated. I ended up having to add quite a bit more water in order to get the blender working properly – and of course, this meant I was left with more of a slurry than a ground-up carrot pulp. 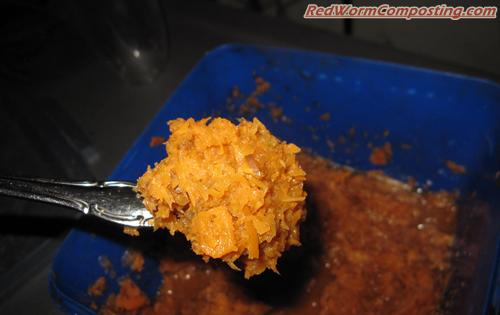 Since a lot of nutrients were in the liquid, I knew I couldn’t just strain the material – so, I ended up having to add approx the same amount of water to the other two treatment bins (just to make sure the moisture content wasn’t drastically different from one bin to the next). In order compensate for all that extra water, I ended up adding a substantial quantity of absorbent bedding material to each bin as well.

In hindsight, I made a pretty silly (classic “newbie”) mistake when I first set up the bins – I didn’t bother to add any air holes. I figured with 50 tiny worms and not all that much food material there wouldn’t likely be any serious lack of oxygenation, or need to worry about ammonia release etc. Initially, I was right – prior to my second food addition, everything seemed to be doing just fine in each of the bins with no worms trying to escape or appearing in any other way distressed. Of course, when adding the additional 500g (more than a pound) of carrots AND all that water to these tiny bins I should have clued in to the fact that the oxygen demand was going to increase, but for whatever reason I still didn’t do anything about it.

I think you know where I’m heading with this! LoL

Ok – so it didn’t end up being nearly as bad as it could have been, but let’s just say the next time I opened up the fine particle bin, the reality of the situation became glaringly obvious. My little wiggly friends were all over the lid and sides of the bin, and some of them even fell outside the bin as I opened it. CLEARLY they weren’t all that happy with the environment down below! Not too surprisingly, the ribbon bin wasn’t nearly as bad (I think there might have been one or two worms roaming up around the sides), and I didn’t see ANY worms when I opened up the disk bin. This seems to be our first indication of the fact that increasing surface area of wastes substantially results in a rapid increase in microbial activity (which in turn depletes oxygen much more quickly, among other potential side-effects).

After putting all the worms back into the fine particle bin, I added quite a few holes in the lid and sides of all the bins – then closely monitored the situation for the rest of the day. The increased aeration seemed to do the trick – and no more worms have been found roaming since! One other adjustment I needed to make involved adding some more bedding material to the disk bin. I noticed that a lot of water was pooling down in the bottom, whereas it seemed to be more evenly distributed in the other bins. Technically, more bedding has now been added to the disk treatment bin, but my feeling is that the development of swampy conditions in that bin (as compared to the other two) would have more of an impact on that treatment than the addition of more habitat material – so I don’t think it’s going to keep me up at night! lol

It has been interesting to see how things are progressing in each of the bins over time – starting to provide me with some perspective regarding the difference between an “optimized” system and your typical, run-of-the-mill home worm bin. In the disk bin I am definitely seeing other critters establish themselves more successfully – white mites being a prime example. Larger chunks of food material seem to become serious breeding/feeding grounds for other organisms – likely because there is a lot of food value and because the worms aren’t able to process them nearly as quickly. I have seen mites in the other bins, but they don’t seem nearly as concentrated in any particular area. 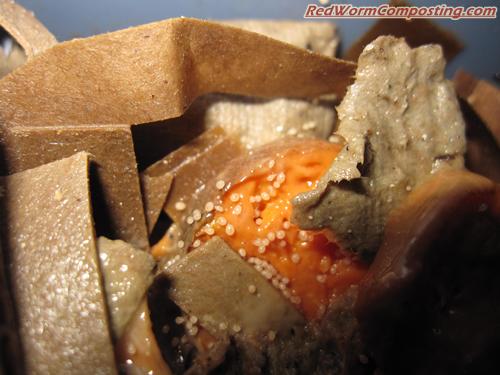 Now that the carrots are decomposing quite readily in all three treatments, it’s probably going to be fairly important not to disturb the composting zone too much. In doing so, I’m just going to end up increasing the exposed surface area of wastes in the disk and ribbon treatments – which would obviously end up defeating the purpose of the experiment. In some ways this is a bit of a pain, since it would be nice to see how the maturation and breeding of the worms is progressing in each treatment – but I’m sure I can get away with doing a bit more of a thorough examination the next time I add food (since they will have processed much of the carrot material by then).

Anyway – that’s all for now. I’ll be sure to keep everyone posted!
8)