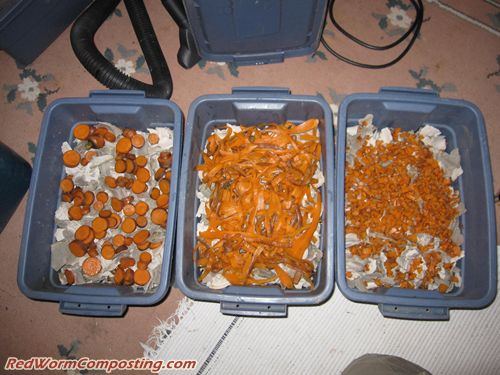 Back at the beginning of the month I wrote about my plans to test the question of whether or not food particle size makes a difference in terms of worm growth/reproduction (see “Does Particle Size Make a Difference?“). Later that same week I set up my three bins (pictured above) with shredded (drink tray) cardboard and 350 grams of carrots each. My three treatments, again, are: 1) coarsely chopped, 2) ribbon (peelings), and 3) finely chopped.

All carrots are being frozen prior to use, and I had assumed that this would allow me to further grind up the finely chopped carrots (thus increasing surface area) – but things didn’t work out as planned (ended up rubbery rather than soft and easily squished!), so I had to make do with that size for my initial set up. Moving forward, I will start blending the carrots for the fine-particle treatment just to make sure I’m REALLY getting those particles nice and small.

After adding the carrots to each bin and moistening everything, I simply let them sit until the following week. About 5 days after setting up, I added 50 immature Red Worms to each bin. Again, I didn’t want to add mature worms since they could have already been fertilized – meaning a fair number of cocoons could have been laid in the system without any further mating and any real influence from particle size in general. 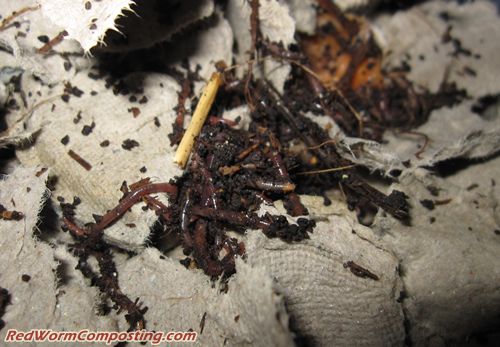 I’ve checked on the bins since stocking them and the worms seem to be processing the carrots and cardboard down in the lower zones. I’ve had to add more water (equal amounts to each bin) on a couple of occasions since the systems have been on the dry side.

I will be purchasing some more carrots and getting into a regular feeding schedule – hopefully starting next week.
Stay tuned!
8)