As promised, here are Neal’s Day 1-8 VB24 journal entries (if you missed the “Day 0” entry last week you can find a link at the bottom of this post). Again, let me remind everyone that Neal’s future updates will be fewer and further between – he simply wanted to let us know how the first week went (always an important time period for a brand new vermicomposting system).

The five pounds worms that I ordered through RedWormComposting.com arrived right on time and in good condition.  Their arrival created a bit of a stir since they were delivered to my office.  I wasn’t looking forward to the attention they would create at work, but that was better than having my investment potentially bake in the sun at my doorstep.

Five pounds of worms may have been more than necessary. According to Bentley’s “getting started” page on his blog, the commonly accepted guideline is to have 1lb of worms per square foot of surface area.  Based on this guideline, the VB24 should only need 4 lbs of worms (it’s 2’ x 2’).  Plus, since red worms reproduce quickly, I could have started with fewer and the population would have quickly grown to this amount.  I decided to play it safe and order 5 lbs.  I was concerned that some might die during delivery and that others might not survive in the VB24 since this was the first time I’ve experimented with vermicomposting. Plus, the more worms, the faster they produce great vermicompost for next year!

While the worms certainly weren’t looking too lively after traveling for a few days, they were alive and hopefully they will thrive in their new habitat.

Here are a few of the many worms that arrived: 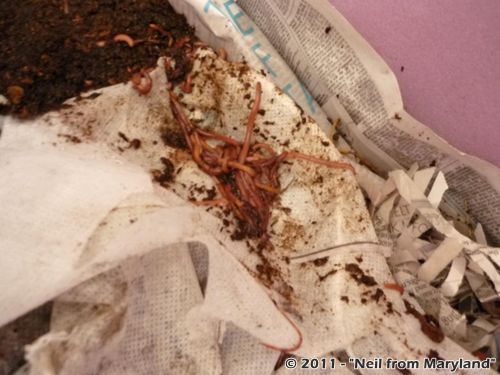 At the end of the day, I attached a small light to the end of an extension cord and hung it over the edge of the bin. Worms can have difficulty adapting to a new environment, and I have read that having a light on in the bin prevents them from scaling the walls. Since worms are sensitive to light, this will hopefully cause them to burrow into their new habitat in lieu of attempting an escape. 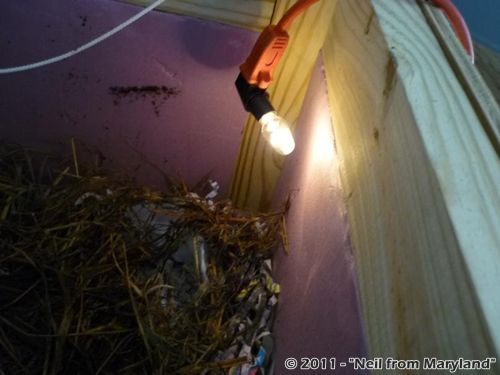 I was a bit nervous when I checked my worm bin this morning.  All the worms were clustered in the four corners of the bin and a good number were trying to escape by crawling up the sides.  My theory was that the system was creating too much heat.
My sister agreed with this theory.  She has extensive experience raising chickens, and whenever heat lamps in chicken nurseries create too much heat, the chicks move to the corners where it is cooler.  Except instead of this being a case of baby chickens escaping the heat of a lamp, these were worms clustering in the corners of my VB24 because they were on top of decomposing organic waste that was creating far too much heat.
To remedy this problem, I dug a hole that was 6” in diameter in the center of the worm bin.  I filled this hole, which went all the way down to the bottom layer of cardboard, with shredded, moistened cardboard.   Since the middle of the bin was the hottest, I thought this step would cool the system down.  I also added damp, shredded cardboard on top of the habitat.  Thanks to Bentley’s suggestion, I filled a glass bottle with ice-water and placed it in the system to further cool things down. Additionally, I discontinued the use of the light, which was also a contributor of heat.

By the evening, a good portion of the worms had moved away from the corners of the bin and towards the middle.  I refilled the glass bottle with fresh, cold ice water and placed it again in the system to ensure that the system would not overheat again at night.

On Saturday morning, the worms were spread throughout the system.  There was no significant clustering in the corners of the bin.  The worms had increased in size since arriving on Thursday in a dehydrated state and they looked healthy.  When I opened the lid of the VB24, I noticed significant activity and movement.  It appears that I solved the issue of overheating by adding more bedding, discontinuing the use of the light, and temporarily adding cold bottles of water to the system.  Since only a few worms were on the sides, I’ve decided not to use the nightlight for the time being.

Overheating still seems to no longer be an issue.  I have not added bottles of ice-water to the system since Friday, and there are no signs today that the worms are uncomfortable in their habitat.  A few worms were making their way up the sides of the bin, but I imagine that this should be expected with a worm population of this size in the VB24.

The worms are indeed thriving in this habitat.  They are well spread out throughout the system.  Here is a (blurry) picture of some of them: 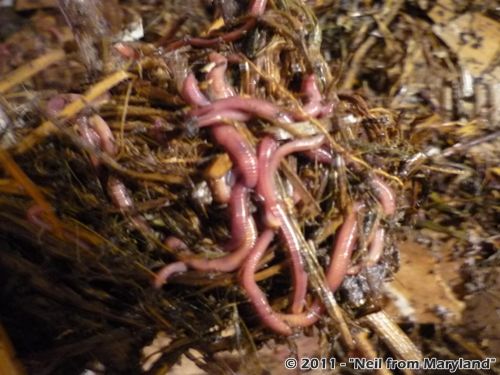 This evening I fed the worms for the first time since placing them in the bin.  I gave them a mix of food scraps–banana peels, peaches, carrots, coffee grounds, and greens–that had been rotting in a Home Depot 5 gallon bucket for 3-5 days.  The 5 gallon bucket was about one-third full.  Once again, I mixed some shredded cardboard in with the food scraps while they were rotting.

After evenly spreading out the new food on top, I decided to run my first experiment.  I have heard that worms love watermelon, so I placed half of a water melon rind on one side of the worm bin and half on the other.  On one side the rind was cut into small pieces, and on the other the rind was cut into two large pieces.  It will be interesting to see how the worms react. 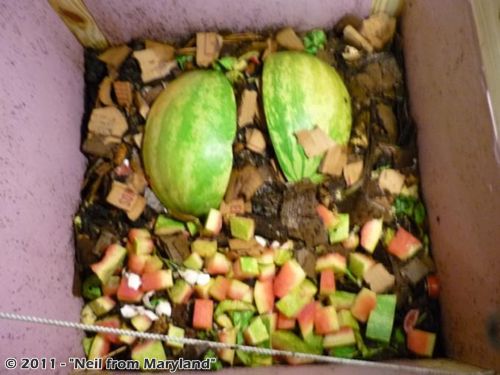 This morning I noticed that the worms were clustering towards the sides of the bin and that about fifty of them were crawling up the sides.  Before I fed them yesterday evening, they were spread throughout the system, so this is quite a change. I am not noticing an excessive amount of heat in the system, so it must be something about the quantity or type of food that I fed them yesterday that caused them to react this way.  Since there was not as much clustering as on day 2, I decided not to make any adjustments to the system such as adding bedding.  I did spray a little water on them to make sure that there was enough moisture (I do this at least every other day).

I checked the system again in the evening, and the worms had dispersed throughout the bin.  Only 7 of them were on the sides. My theory is that the placement of new food into the system created a gas buildup overnight and the system did not vent enough of it out quickly enough (if anyone has another theory, please email me at neil.vermicomposting@gmail.com).  I kept the lid open for a little while in the morning, and that may have dispersed the gases created by the not-fully-decomposed new food.  This just shows how you have to be careful when adding to much new food to the system.

Everything looks good in the system. The worms are spread throughout and they have started to work on the watermelon. It’s nice that the bin is built and the worms have plenty of food. Now that I’m getting the hang of it, I think that this system is going to be pretty low maintenance from here on out. I will be monitoring the system more closely, however, after I feed them. I didn’t really have to pay any attention to the worms at all today. I just checked on them in the morning and evening.

Today was another low-maintenance day. The worms were extremely active in the bin both in the morning and evening when I checked on them. When I open the lid, they immediately dive into the compost to escape the light.
Here are a couple “pros” of this system based on my first week of operating it: 1) It is low maintenance (after the initial labor-intensive process of getting it built and set up), and 2) the bin doesn’t create any unpleasant smells. I would say that the bin has added a bit of an “earthy” smell to the garage, but it is not unpleasant and it doesn’t smell anything like rotting food. I don’t have any “cons” to report on at the moment. I’m really enjoying my new pets.

Releasing Worms Into the Wild