Two weeks ago I posted about my new tea bag vermicomposting experiment.

So far things seem to be coming along very nicely! When I dig around in the bin I am able to find a lot of active worms, and they definitely seem to be zoning in on the older tea bags.

Overall, I would say the size of the worms (on average) has increased. Hard to say how much of this is linked to improved nutrition and how much is due to rehydration, but either way it is a positive indication that the worms are doing better.

I even found a small number of worms that could be already be considered back to “normal” size. Given how tiny these worms were, this is pretty impressive – and it offers some support for the “Paley 100” concept that was discussed briefly in the original “neglected worms” blog post. 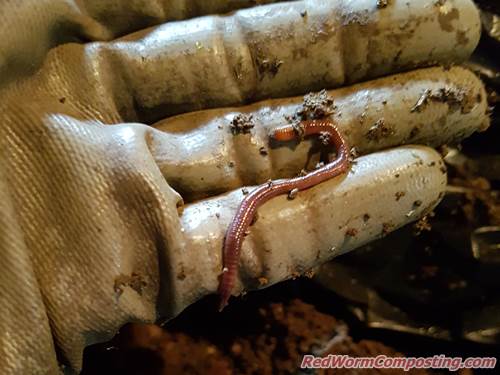 As touched on previously, I am only adding tea bags to this bin now (and moving forward). Not sure how many per week – but I will attempt to come up with an estimate (should be 30 or more, based on our current tea consumption).

There likely won’t be all that much to report on over the next month or two, but I will be sure to monitor the system regularly and will keep you abreast of any new interesting developments.