I’ve always been a “coffee guy” (nothin quite like a nice cup of joe to start my morning off on the right foot), and almost never drank tea. But that has changed a lot recently, ever since developing a keen interest in green tea (and herbal teas).

This might sound a tad extreme (or not…I dunno), but I am currently up to 6 or 7 cups of the stuff, on average, each day (still drink a bit of coffee, but not as much). My wife usually has at least a couple of cups of herbal tea each day as well, and so – for the first time ever – I have found myself with a LOT of used tea bags on my hands!

Naturally, being the worm-head that I am, this got me thinking…(Uh oh! haha)

I started wondering what it would be like to basically set up a vermicomposting system that would ONLY receive tea bags – nothing else. This just happened to be right around the time that I also checked on my “ridiculously badly neglected worm bin“, so I knew what I had to do!
😎

Half of the material from the badly neglected bin was used for my “Tiny Red Worm Rehab” project, and the other half will serve as my starter culture for the tea bag vermicomposting project.

NOTE: I mentioned above that the plan was to set up a system that will “ONLY receive tea bags”. While this will be true moving forward, I did at least want to help things out a bit by adding some bedding and a little food (other than tea bags) when starting up the system.

The set-up process was extremely simple. First I added a bit of shredded cardboard (on the empty side), along with my current supply of tea bags. 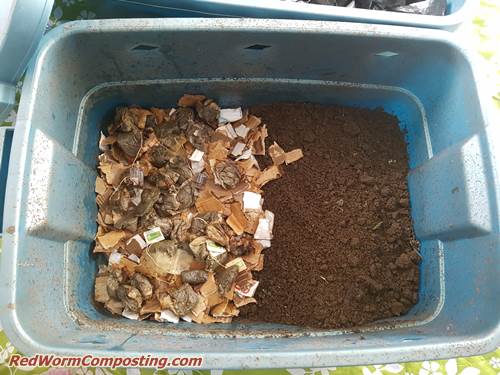 I then added some water and sprinkled in a small amount of chick starter feed. 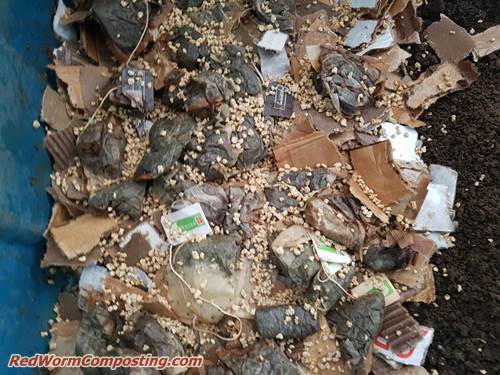 Next, I added a bit more cardboard and then simply moved all the wormy material over from the other side. As touched on in my Tiny Red Worm Rehab post, there seemed to be a lot more worms in the material used for the tea bag project, so it will be interesting to compare population size between the bins as the worms (hopefully) start to bounce back! 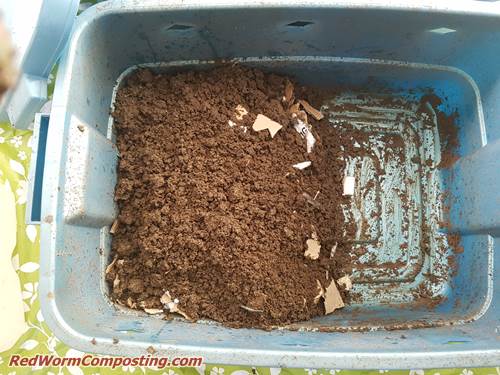 I ended up adding a garbage bag over top of the worm zone, along with the original lid (that was one the neglected bin). No real rhyme or reason for using the lid (while not using one for the other bin), other than the fact that I really want to help these worms to re-hydrate, and want to encourage lots of microbial action in the food zone.

From here on out, I will only be adding tea bags to the system (will likely collect them for a week at a time and add all at once). I am very eager to see how things pan out!

If any of you have used a lot of tea bags in your worm bins I would love to hear about it – be sure to add your comments below!
😎