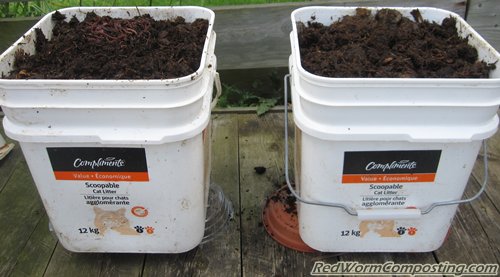 Can Red Worms improve the value of farmyard manure as a soil amendment?

This seems to be the year of ‘challenges’ here at Red Worm Composting! Hopefully everyone is having as much fun reading about these things as I do setting them up and writing about them.
🙂

This particular experiment was inspired by a comment that someone left on the blog some time ago – I can’t even remember the particular post it was associated with, but what’s more important is the gist of the comment itself. In a nutshell, the person said that horse manure is generally not considered a good soil amendment by gardeners since it is fairly low in nitrogen (compared to other manures) and often contains lots of weed seeds.

Well, I’m not all that concerned about weeds myself, but I was fascinated by the notion that horse manure doesn’t really have good fertilizer value. It seems to be working quite well in my gardens and trenches this year. Of course, in my case the ‘missing link’ MAY be the large population of Red Worms that happens to be feeding on this manure – and THIS is exactly what I’m setting out to test with this experiment.

Right off the bat I should once again remind everyone that I use the term ‘experiment’ rather loosely. I have a huge amount of respect for the scientific method, but I rarely set up tests that will offer statistically-significant results (since I rarely set up multiple reps or repeat the experiment) – so I hereby encourage people not to take my findings as ‘gospel’ by any means.

Ok – moving on to the challenge… 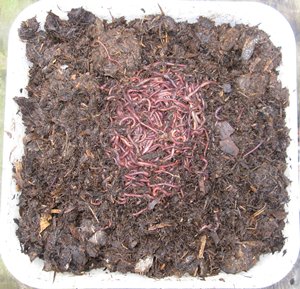 Yesterday, I filled two small buckets (each with multiple drainage holes in the bottom) with moistened, aged horse manure – the same stuff I regularly feed to my worm herd. To one of the buckets I then added approximately 1/4 lb of Red Worms (Eisenia fetida).

Next, I placed 12 Swiss Chard (‘Rhubarb Chard’) seeds on the surface of the manure (in three distinct zones with four seeds in each), and lastly added an additional thin layer of manure (which I then sprayed down with water).

My goal is to determine if the presence of composting worms makes a difference in the germination and/or growth of the chard plants. Will the plants grow faster/slower? Will they be bigger/smaller? Will they look different in general from those in the manure treatment?

My plan is to select only one plant from each group of four, thus (hopefully) guaranteeing that we end up with three healthy plants for the main growth period. Each bucket will receive the same amount of water, and the same amount of additional manure (if it becomes necessary to add more), and of course be grown in basically the same spot (so identical light, temperature etc). Speaking of which, I have put the buckets up on my deck, with each also sitting on its own set of pedestals to help ensure that the non-worm treatment doesn’t end up with worms.

Judging by all the dirty tracks around the rim of the worm bucket this morning, I suspect that I may have lost some of my worms already. I found some huddled under a nearby planter, and I’m sure any others that ventured out will have gone down through the cracks in the deck. I am not particularly concerned about this since I have every confidence that a decent number of worms will stay put, and enjoy living in the moistened manure.

I am going to take pictures of the buckets as often as I can remember (hopefully every couple of days or so) so as to get a good photo record of the changes occurring in the buckets over time. I will of course also be providing plenty of updates as we go along.

Do Euros and Red Worms Get Along?