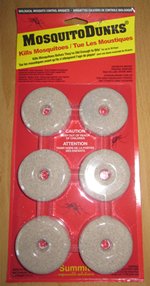 This is a question I am hoping to answer via some experimentation in the near future.

Some may recall that I tested out the nematode, Steinernema feltiae, as a fungus gnat killer last year and found that it was reasonably effective. The problem was that it was a fairly expensive solution, and generally would require ongoing applications in order to keep the gnats at bay over the long haul. Incidentally, I also tested Steinernema against fruit fly larvae, but I discovered one of the other limitations of this biocontrol organism – that being heat intolerance (at least I am pretty sure that’s what the main issue was).

And if those limitations aren’t enough – perhaps I should remind you of the fact that Red Worms have been shown to kill these nematodes as well!
😆

I have read that some people have used ‘mosquito dunks’ successfully to control fungus gnats, so I’ve decided to try them out myself. The advantage of this approach (assuming it works) is that the dunks are a lot less expensive (especially when you consider how long a package will last in comparison to nematodes), and just generally less of a hassle to deal with.

I’m thinking that if I simply immerse a small chunk o’ dunk in a container of water (a full dunk is apparently enough to treat 100 sq ft of water area, so using a full one might be a bit of overkill – haha), then use that water to moisten an infested habitat, it should (hopefully) work.

I’m definitely not as optimistic about the effectiveness against fruit fly larvae, but you never know. Fruit flies are in the same Order (Diptera) as gnats and mosquitoes, but I don’t know if there is enough similarity. The particular strain of bacteria, Bacillus thuringiensis israelensis (say that three times fast!) is specific to dipteran pests, while other strains are used against beetle larvae, caterpillars etc – so that gives me some hope.

The key will me to make sure there is enough of this bacteria in the test systems that it ends up being ingested.

Anyway – I will be getting some experiments up and running in the next week or so, and will write a post once I am ready to roll.
8)