Steinernema feltiae VS The Fruit Flies 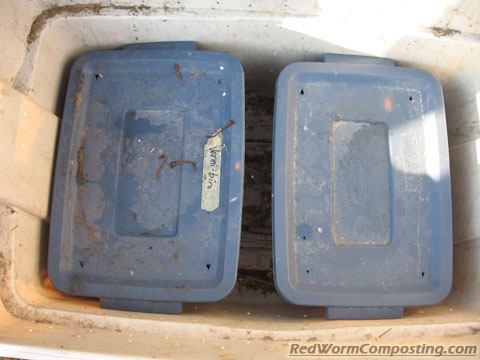 As mentioned in my recent post about gnat-killing-nematodes, I’ve decided to test out these nematodes against another pesky worm bin fly – the fruit fly! They are reported to be effective against a wide assortment of fly (and other insect) larvae, and as I’ve discovered they do actually work reasonably well against fungus gnats. 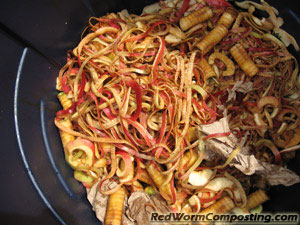 I must admit to having zero trouble breeding my initial stock of fruit flies. One of the waste materials I receive from my restaurant composting project is apple waste – lots and lots of it, I might add. It consists of cores and heaps of long apple peelings that have been removed with a special machine, so everything is very uniform. The peels strings are a little creepy actually, resembling squid tentacles, or a heap of…gasp…WORMS!!
😆

Anyway – this stuff is prime fodder for fruit flies, as I have discovered in my outdoor composting systems! All I did to attract my initial bunch of breeding adults was put some of this material in a small, lidless rubbermaid bin (outside) and let it sit. It didn’t take long before swarms of fruit flies were hovering around the bin.

I next divided the peelings between two separate bins, added lids, then simply left them to sit in a larger bin for a number of days – plenty of time for the fruit flies to do their business and for larvae to start hatching.

Today, I drained off the liquid from the decaying apple sludge (which contains zillions of little fruit fly maggots), added some absorbent cardboard so that it’s not quite so much of a sloppy mess, then added some of my trusty nematodes to one of the bins 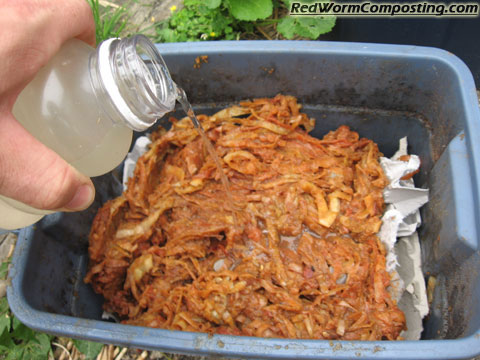 As per usual, this is not meant to be a rigorous scientific experiment by any means. I simply want to see what happens. Hopefully the nematodes will have a pretty major impact on the fruit fly larvae in the one bin, but we shall see. The nematodes are only supposed to be good for a couple weeks in the fridge, and I think I’ve past that point now, so they very well may be no good anyway.

I’ll be sure to keep everyone posted!