Yet another brand new year has arrived, and what better way to get things going again here on the blog than with a fun RWC experiment?! Unlike my typical follow-alongs, however, this time I want to get as many of YOU involved as possible.

For quite some time I’ve wanted to start a new version of my original “Four Worm Reproduction Experiment“. But, I wanted to improve on the experimental design AND make it even easier to keep up with (if you’ve followed for any length of time, you’ll know that some of my experiments can end up falling by the wayside – especially when I make them too time-consuming).

Putting together my “Will a Red Worm Population Double in 3 Months?” blog post served to motivate me even more. I’ve been dying to see just how close I can come to those “ideal” population growth stats provided by my good friend George Mingin.

He and I are preparing to release a rather unique worm-growing guide quite soon (as of the date I am typing this), so I’ve decided to have a bit of a vermiculture* extravaganza here on the blog over the course of the next 2 to 3 weeks (yet another reason the timing of this experiment works so nicely).

* Although many people use the terms “vermicomposting” and “vermiculture” interchangeably, vermiculture has much more of a focus on worm growth/reproduction and far less focus on waste processing and vermicompost production.

So What Exactly Is The “Tiny Tub Two Worm Challenge” (TTTWC)?

In a nutshell, it’s a community-based experiment whereby AS MANY people as possible set up “tiny tub” vermiculture systems, starting with only TWO worms. Red Worms are the main focus, but I welcome results from those growing other types of worms as well (in fact, this would make things a LOT more interesting). I myself will likely set up some small Euro bins in addition to my Red Worm bins.

As you might guess, this is not meant to be a scientifically-rigorous project. It’s tough enough to set up a highly-controlled/consistent experiment myself, let alone expect the same from a (hopefully) large group of participants.

1) You must start with two immature (small and lacking a clitellum) worms. The problem with adult worms is that they can already be fertilized and ready to start dropping cocoons right away, which will skew the results needlessly.

2) Ideally, you should use a container that is similar in size to the 500 ml (16.9 oz / ~ 0.5 quart) cottage cheese / sour cream tubs I am using. That being said, I think it would actually be really interesting to see how much of an impact the size of the container has on population growth.

Really, other than starting with two small worms, the ONLY other critical “rule” is that you…

3) Record AS MUCH information about your trials as you can. Ambient temperature, materials (food/bedding) added etc – and of course, all data relating to population growth (as it relates to time). Regardless of experimental variations among participants, I’m hopeful that we’ll at least be able to see some fairly consistent patterns emerge (eg faster population growth within certain temperature ranges, with certain types of bedding/food etc).

Don’t stress too much about this (eg. I realize not everyone will have a thermometer) – but do the best you can. I would much rather have people participate and produce some data, than to scare people off from participating altogether, or to have many folks giving up part way through.

The key here is to have fun!

4) My other (idealistic) goal, apart from gathering lots of interesting worm-growth data, involves “spreading the worm”. I think it would be really cool if all participants eventually donated (or perhaps sold for a low price, if you’re entrepreneurial) all the worms grown in the experimental bins. It would be fun to see how many worms we can give away! Since we’re keeping a close eye on the number of worms in our bins, it should be pretty easy to maintain an accurate running total.

There is no specific timeline for this project. I could see it lasting anywhere from a few months up to a year or more. It could even evolve into an ongoing part of RWC! Hard to say for sure.

I got started with my own first set of (3) tiny tubs last Friday (Jan 2nd). I had some frozen-then-thawed food wastes ready to go – in fact I was a little worried, since the material was starting to stink (you can see my cautions about this in a recent blog post). But all things considered, I figured it wouldn’t hurt to take a chance on it (I’ll provide an update on the situation a little further along in this post).

My bedding of choice for these bins is primarily shredded newsprint, but there is also a small amount of shredded cardboard and shredded brown paper. The first thing I did was to add a thin layer of bedding in the bottom of my tubs. 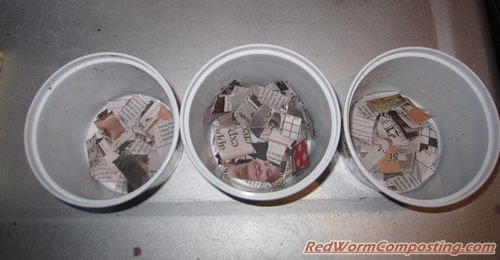 Next, I sprinkled in some dry(ish) living material (basically, well-aged horse manure) from some open systems I happened to have close by. This will help to get the compost ecosystem going in the new systems – but I will definitely need to watch very closely to make sure I didn’t accidentally introduce more worms/cocoons. (More on that in a minute) 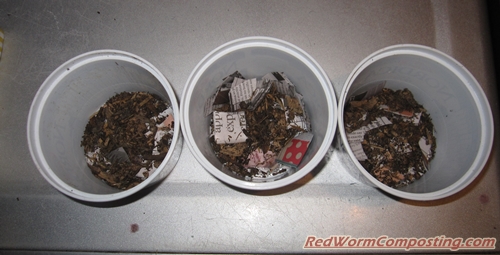 Then, I added a small amount of the food waste. While I’m not worried about adding the EXACT same quantity and type of food to each bin, I DO at least want to attempt to establish some consistency. So, I created a somewhat-homogeneous mix of food before adding a similar amount to each bin. My main goal for this particular trial (I’m sure I’ll try different approaches with future tiny tub sets) is to provide a constant source of nutrition for the worms – i.e. ideally, that won’t be a limiting factor at any time.

Next, I added another thin layer of living material, along with some additional bedding layers, before lightly watering everything.

I added a dry layer of shredded newsprint on top as well (more out of habit than anything).

Then I added my 2 worms! Again, my recommendation is to avoid overthinking this too much! As long as the worms are small, and don’t have any sign of a clitellum you should be fine. Ideally, they will be similar in age – but really, the population growth experiment only “officially” starts once they’ve both matured anyway, so if you have to wait a little longer for one of them it’s not the end of the world. 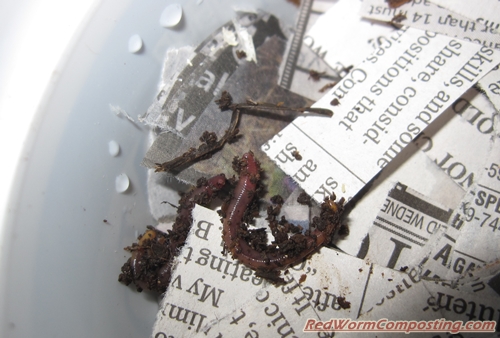 UPDATE: As touched on earlier, I was a little worried about exposing my worms to pretty foul-smelling waste materials on Friday, so I made sure to check up on them today. I’m happy to report that all worm pairs are alive and well, and everything is looking/smelling great! I found a small cocoon in one of the bins (removed it of course) – definitely a reminder that I’ll need to keep a very close eye on these bins while the worms mature.

Obviously, if any tiny hatchlings show up (or if I find any other cocoons), it will mean they were introduced via the living material. Needless to say, I won’t be adding any more of this material to these particular tubs.

I can’t wait to see how things progress over time!

Weird and Wacky Way to Grow Loads of Worms?

Hamster Bedding in a Worm Bin?