It’s been just over 5 months since my last “Tiny Tub Two Worm Challenge” update. According to my little experimental log book, April 8th (same day as last update) was the very last time I did anything with these bins (other than the occasional peek inside).

So, you can probably imagine my surprise when I checked on one of the “tiny tubs” recently, and found living Red Worms in it!

In light of this discovery, yesterday I decided to do a more thorough investigation.

What’s interesting is that even though all 3 tubs were basically treated the same, tub #2 and tub #3 were badly dried out in comparison to bin #1 (which happens to be the tub I checked and found worms in recently).

As some of you may recall, bin #2 didn’t have any worms in it (the original pair died off, or escaped very early on and I kept it as a no-worm comparison treatment). So I didn’t even bother to do anything further with this one other than re-hydrating it.

I spent some time looking through the contents of bin #3 to see if I could find any living worms, or at least “future worm potential” in the form of viable cocoons. I wasn’t able to find any worms, but there seemed to be quite a few cocoons.

As dry as it looks in the image below, the inner core did seem to have some moisture, so I’m hopeful that even if there aren’t any worms hidden in there, there will still be some viable cocoons. 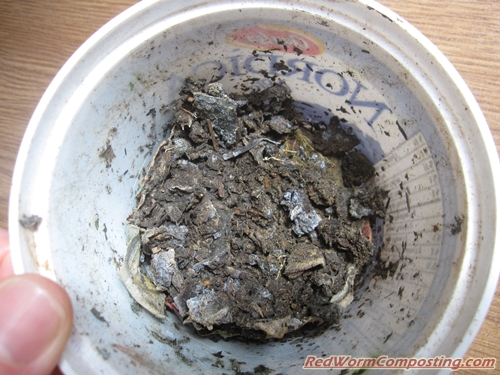 The appearance of the contents of bin #1 was quite a bit different than that of either bin #2 or #3. It looked really well-processed, and – as touched on – I was able to find Red Worms. Interestingly, two of them we almost “normal” size (you can see one of them in the image below). 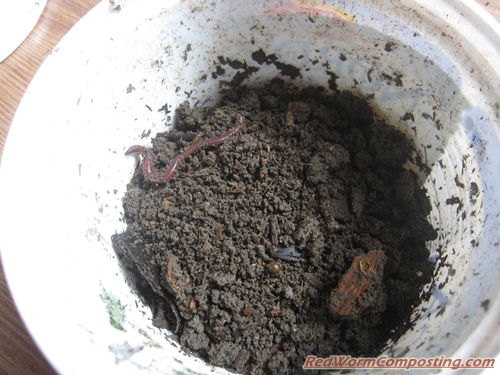 All the rest were very tiny. I think it’s reasonable to assume the big ones are the original pair of worms I added at the start of the experiment. All the rest of them looked like hatchlings – but I guessing at least some of them are actually very tiny adults. 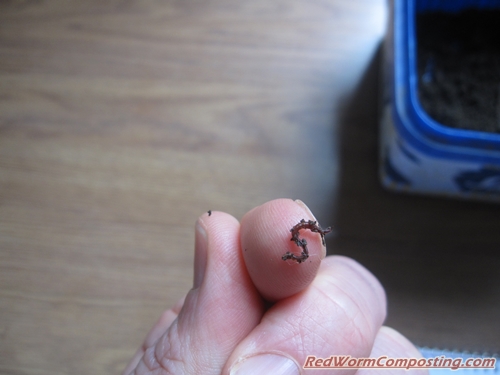 I decided not to count them since I wanted to limit their handling and overall disturbance. I’m initiating a “phase II” of this experiment, to see what happens when the contents of these tubs get added to a new, larger system containing plenty of food.

To kick things off I set up two small bins (17 L – ~ 4.5 gal) with a mix of moistened, shredded cardboard and comfrey (in almost-equal proportions for now – I will likely mix in more cardboard later before worms are added). I’ll let the mix age for a while, and then add the contents of bins #1 & #3 (the ones with worms, or at least “worm potential”) to each of them (obviously, the contents of each tiny tub going into its own distinct, bigger bin). 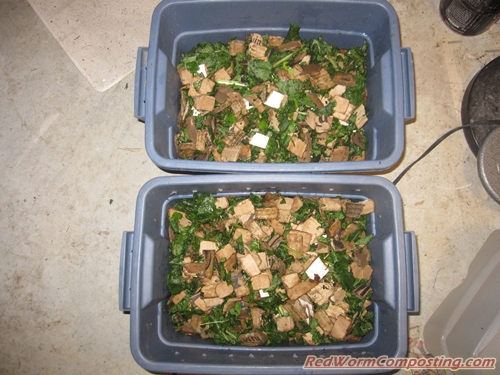 Those of you on the “5 Myths and Mistakes of Worm Farming” email list, or in the Worm Farming Alliance (at the time of this writing) will know I’ve become really interested in Brian Paley’s “How To Breed, Raise, and Maintain A 100-Pound Stock of Worms in a Single Room” article (and I have created a summary guide/audio for WFA members). So I am REALLY interested to see what happens when these worms are provided with more space and a food-rich environment!

Stay tuned. It should be interesting!
😎

P.S. Does anyone else out there still have their tiny tub systems up and running? If so please provide an update in the comments section below.