What do you get when you pack up a passionate (but heart-broken) vermicomposter/eco-landscaper and send him across the country on a bike? 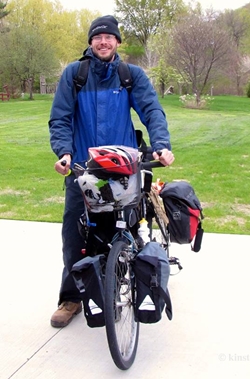 My good friend, and Worm Farming Alliance member, Christopher Brickey is no stranger to life-changing moves and, just generally, to flying by the seat of his pants. Some people run off to join the circus (or so I’m told). Chris – at the ripe age of 16 – left home and became a travelling vendor on tour with various music acts, such as The Grateful Dead (until Jerry died), Phish, Allman Brothers, and Jimmy Buffett, among others.

How on earth did this lead him to vermicomposting, you ask?

In 2008, business tanked for the festival world as a whole, so it quickly became a lot more challenging to continue on as a vendor. Chris started doing odd jobs to make ends meet – and eventually settled on landscaping as a way to consistently make some money.

In typical Chris fashion, he got his start by pulling a small trailer – containing a beat-up lawnmower and weed whacker – by hand, and knocking on doors to drum up business. He eventually graduated to a bike-pulled operation, and along the way developed a serious passion for worm composting (all starting with mature worm bin his mother gave him), eco-landscaping and permaculture.

And the heart-break? The cross-country bike trip?!

While based on MN (in recent years), Chris started seeing a girl in Chicago. Fueled by love, and tired of the long-distance-relationship game, he decided to pick up and move to the Windy City late last year so he could take things to the next level with his relationship. Not too long after Chris had moved the last of his things, and just before New Years Eve, his girlfriend dumped him! (sounds like a groan-worthy plot twist from a movie, doesn’t it?)

When one door closes, another one opens…

Not too surprisingly, Chris’ heart-wrenching break-up made him want to hit the road once again – this time on his bike, with only as much baggage as he could reasonably carry (he sold off most of his other belongings) – eventual destination: California.

I caught some updates from the first leg of Chris’ journey in the WFA Facebook group and was immediately sucked in. I have a soft spot for long distance bike trips of any sort – I rode my bike from Jasper Alberta to Vancouver British Columbia when I was in my mid-twenties – so you can probably imagine how gaga I became when I learned that Chris was even visiting farms, and doing his best to promote vermicomposting along the way!

I KNEW this was something other people should know about – so I proposed to Chris an idea for sharing his journey on the WFA blog (including some cross-pollination with RWC, of course). I’ll be helping him schedule stops at various vermicomposting operations, eco-farms etc, hopefully including some meet-ups with fellow WFAers along the way! Chris will share updates and photos as often as he can.

Here is a link to the map of Chris’ originally-planned journey:
https://mapsengine.google.com/map/edit?mid=zUCnieCSvXc8.kZ9pSsysbZDU

He is currently in Yellowstone Park (where WiFi seems to be non-existent, based on the lack of replies I’ve been receiving as of late! lol), and will actually be veering south (away from the route shown in map) to visit a WFAer in Pocatello ID. If we are REALLY lucky, he might then be heading north to Boise ID where, as I was recently reminded, there is a fascinating restaurant/brew pub with a vermicomposting operation in the basement.

So as you can see – nothing is 100% set-in-stone at this point! But I think it’s safe to say that it’s going to be interesting.
Stay tuned!
😎

I am helping Chris to raise additional funds for his trip (the longer he is able to continue, the more interesting stops he can make, and more he can share).

There are two great options for helping out:

1) Donations – sending Chris a donation of ANY amount would of course be greatly appreciated – you can send them in on his “Chris The Worm Farmer” website.

2) RWC Product Purchases – you can also purchase one of the following RWC info products (and for 10% off – more on that in a minute), with 30% (or more) of the profits ending up in Chris’ hands during the fundraising period.

Easy Vermicomposting Course – This e-course (and membership community) helps you learn the KEY principles of effective worm composting, “from the ground up”.

VermBin Series Plans Package – Learn how to create your own DIY flow-through vermicomposting systems, so you can enjoy the benefits of fast waste processing and high quality worm castings.

Worm Farming Alliance “Lifetime” Membership – Originally intended for those wanting to start their own vermicomposting business, the WFA is well-suited for anyone who wants to get more serious about vermicomposting and worm farming. Apart from the high quality and active member community, you will also have access to various courses and training materials – not to mention discounted pricing on worms, Worm Inns, and information products.

*** IMPORTANT *** – To secure your 10% discount (and help us track these purchases – especially important for WFA) please use the discount code “WORMFARMER” (no quotes) on the checkout page for any of the products I just listed. 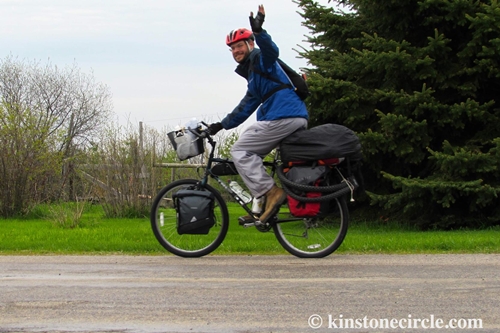 The Cocoons in (Worm) Compost Conundrum