“Waste” Wool as a Vermicomposting Medium 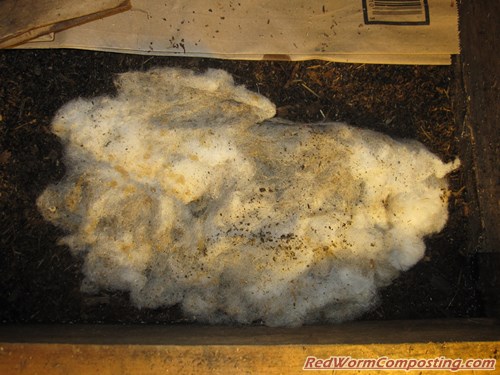 This past Thursday I went to visit my friend Leanne at the site of her exciting eco-farm/permaculture project – something I’d definitely like to write about in more detail at some point – here in Waterloo Region. Almost immediately, I noticed that she’s been using “waste” wool as a mulch material around the base of small trees and in some of her beds.

What a cool idea!

Like other mulch materials, the wool should be able to help suppress weed growth (she said that it seemed to be working ok in that department so far) – but I think an advantage might be that the wool could be a source of nitrogen, yet still be more resistant to breakdown (lasting longer) than some other mulch materials.

I was very surprised to learn from Leanne that a lot of this “waste” wool is simply burned or discarded by sheep farmers. To me, it seems like there could be many potential uses for it – even beyond farming/composting.

But of course, it was immediately the potential vermicomposting applications that came to mind for me! I know how much composting worms seem to love having some sort of wet matrix to inhabit (you can refer back to my old “Natura Cloths – Not Just For Cleaning Anymore!” for evidence of this) – so I can’t help but think that wet wool might be every bit as appealing.

As I was leaving, I asked Leanne if she could spare a small amount of the material to do some testing (and you can guess what she said). Once home, I simply soaked it in water, let it drain a bit, then placed it on top of my VB48 bed (with brown paper yard bags over top to help keep in moisture).

So far I haven’t seen anything particularly remarkable happening. None of the worms have moved into the material yet, and there doesn’t even seem to be much of a congregation of them down below. Interestingly, the worms that are below seem to be primarily Red Worms (the bed is loaded with Euros as well). One thing I noticed about the material is that it IS somewhat oily – so this might be making it less appealing to the worms.

Another interesting tidbit to mention, based on Leanne’s own observations…

Underneath her wool-mulched garden zones there is evidence of soil worms pulling the wool down into the soil! I will be interested to see if something similar happens eventually with the composting worms.