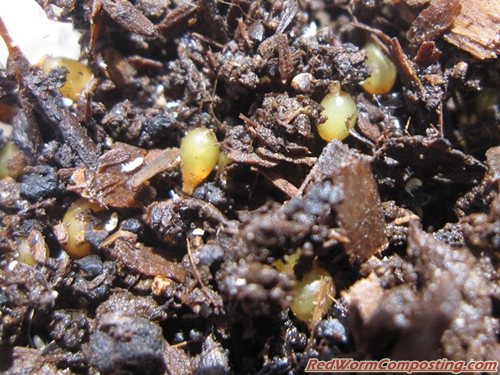 I just wanted to let everyone know about some fun experiments I am hoping to get started very soon (it’s about time, eh?!).
Based on what I’ve read and what I’ve observed firsthand, I know that cocoon production can vary significantly from one system to the next and one situation to the next. As with all things related to vermicomposting, there are so many different factors that can come into play. What I’d really like to figure out is WHAT factors have the greatest impact on cocoon production.

Here are some things to consider:

1) In the spring-time LOADS of baby Red Worms hatch out in my outdoor systems. Similarly, when I have brought cold material in from outside there seems to be a lot of baby worms in the material shortly thereafter. QUESTION – would chilling a worm composting system help to stimulate cocoon production?

2) I have read that loss of moisture from a system can stimulate cocoon production. This makes sense to me since the the sorts of habitats where these worms live in the “wild” can be somewhat transitory – so it’s important that the worms be able to quickly produce their resistant “resting stage” so as to help ensure the future viability of the population. QUESTION – if I start some similar worm composting systems and then let some of them dry out more than the others, will this result in greater cocoon production?

3) I have noticed (and have read) that worms seem to produce more cocoons in systems containing a lot of paper-based materials (paper, cardboard, newsprint etc). I actually conducted an experiment in university and found that worms in paper-pulp-fed systems produced at least twice as many cocoons as those in the next best material (which happened to be manure in this case). QUESTION – if I vary the percentage of paper-based bedding materials in a worm bin, will I see a difference in the number of cocoons being produced?

4) I have noticed (and have read) that worms seem to gravitate towards certain types of material (eg burlap) when dropping cocoons – so you’ll often find them concentrated in these materials. QUESTION – will adding materials like these actual result in an increase in cocoon production?

These are some of the questions I’m interested in (hopefully) answering. If anyone has other questions/suggestions, or just generally wants to leave feedback, please do so below!

Will keep everyone posted on my plans for various experiments!
8)