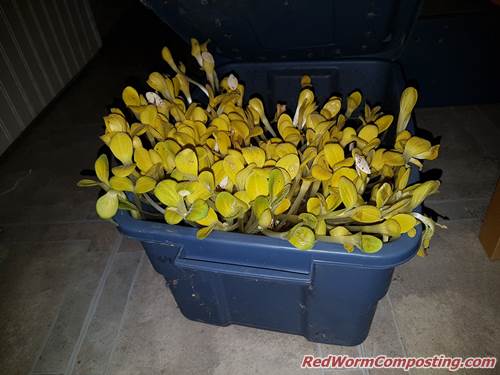 Just about anyone who has vermicomposted for any length of time will have some experience with “volunteer” plants popping up in their system(s), especially when using a wide variety of fruit/veggie wastes (without any freezing ahead of time). For many this seems to be an annoyance – something to be avoided as much as possible.

I tend to have more fun with it – especially in outdoor integrated systems, where I will often just let the plants grow. Last season, for example, I had a very successful white pumpkin plant that took over my garden and produced 13 pumpkins in time for Halloween (I posted about this on Facebook, but unfortunately didnt get a chance to blog about it here).

Volunteers in my indoor worm bins aren’t nearly as fun, I’ll admit – largely because there are limited options for actually growing the plant out – but a recent mass sprouting event in one of my bins reminded me that perhaps there is more potential that I need to explore.

One day during the recent Christmas holiday season I was caught off guard when I walked past a small, neglected worm bin sitting on the floor in my basement, and out of the corner of my eye saw what looked like a yellow/green blob of…something oozing out from the bin! lol

Of course, upon closer inspection I quickly realized it was not a blob of anything, but actually a mass of seedlings that had managed to push the lid part way off! 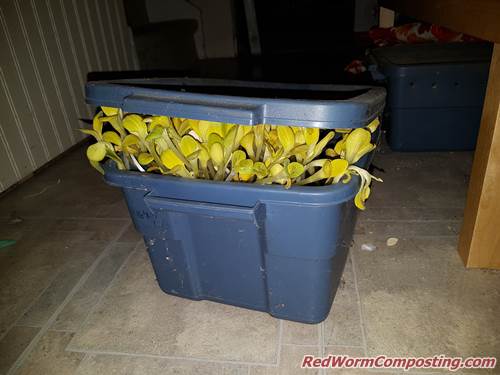 At first I was a bit puzzled by the fact that there were so many seedlings growing so uniformly, but then it suddenly dawned on me that some weeks before that I had tossed in some pumpkin ‘guts’ (from the white pumpkins mentioned earlier) for the worms.

In this particular case, my first impulse was to turn the seedlings into a nutritious “worm food”, so I ended up mowing them down with a pair of scissors, and left them to rot and get consumed by the Red Worms living in the bin. 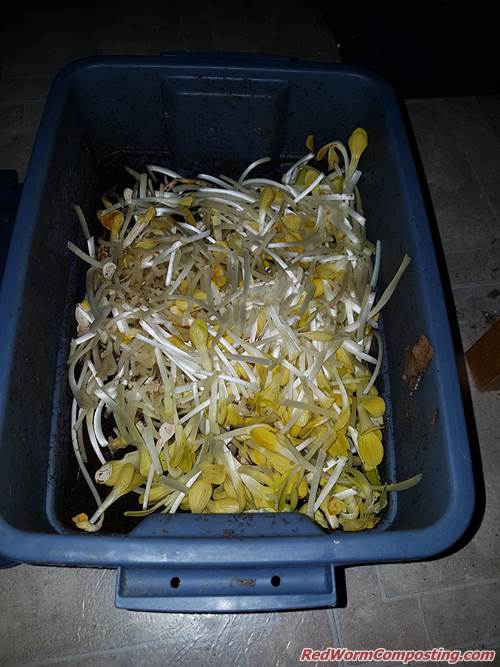 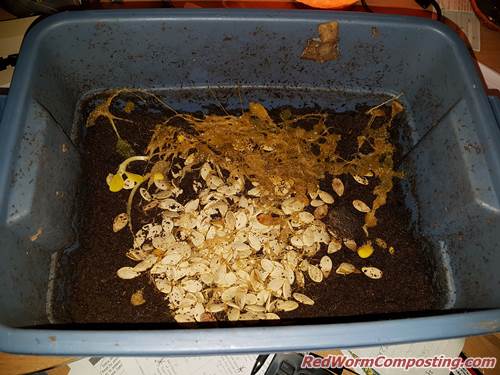 This got me thinking more about two different ideas:
1) The potential for using various inexpensive seeds as a source of “future worm food”. Just toss them in, let them sprout and grow a bit, then mow them down for the worms to eat.
2) The potential for doing the same thing, but for the purpose of growing microgreens for human consumption.

Clearly, a worm bin (especially a mature worm bin) provides fertile ground (literally) for seed germination. The trick for taking this to the next level (beyond the yellow-sprouts-in-your-basment phase – lol) would be to somehow provide the seedlings with more light, without stressing out the worms!

I would think that keeping the bin in a spot with better lighting (but NOT in direct sunlight), and using a thick layer of something like burlap as a cover (with no actual lid) could work well! I have a bag full of buckwheat seeds, plus plenty more of the white pumpkin seeds ready for planting.

I think there might be some more microgreens experiments on the horizon!
Stay tuned.
😎