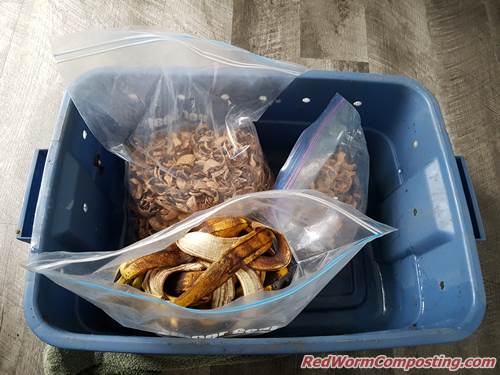 In the spirit of continuing to dust off long lost RWC experiments (I swear I feel more like an archaeologist than a vermicomposter half the time! lol)…

Near the end of January 2017 I set up a small experimental zip lock bag system using walnut shells as a main bedding/food material. Then…wait for it…I basically forgot all about it for the better part of a year. (Shocking, I know! 😉 )

Well, just before the Christmas holiday, for whatever reason I started thinking about vermicomposting walnut shells again – and I decided to start up a bigger, “fancier” experimental system. We’ll talk more about that in a minute.

Of course, it only made sense that I should check on the original system as well! 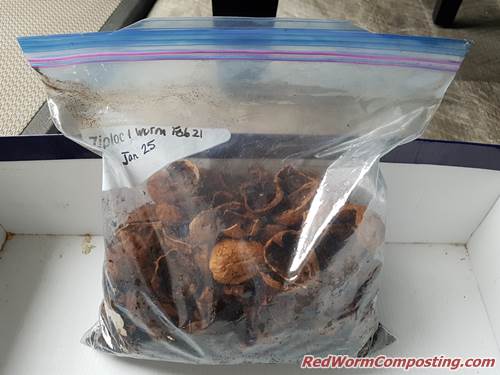 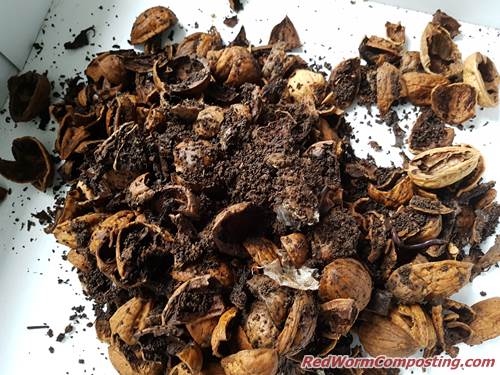 It seems as though most of the walnut shells are still intact, but basically everything else originally added (shredded cardboard + dry beans and rice/barley mix) has been converted into rich, earthy-smelling compost.

Interestingly, the label on the bag seems to indicate that I added ONE worm on Feb 21 (2017). Guess I didn’t get around to blogging about that! lol
Digging through the contents of the bag I was able to quickly find about 10 Red Worms and quite a few empty cocoons. The split between adult and juvenile worms seems to be about 60:40 (young:adult). I would say the adults are fairly close to “normal” size, but they are very dark in color. 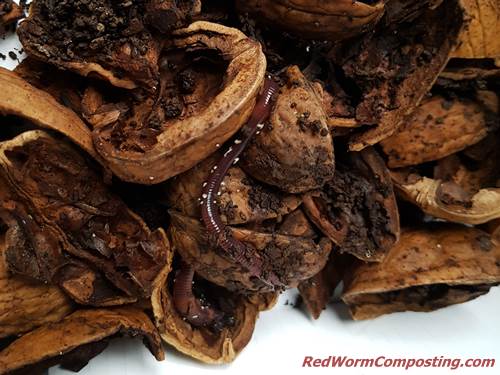 I had actually planned to add the contents of this system to my new system, but I noticed there seemed to be fungus gnats in the old one. So I’ll just keep it going independently. Speaking of which – just for fun, I decided to sprinkle in some chick starter feed and add some water to see if I can accelerate the break down of the shells (and development of the Red Worm population).

[Oh, and in case you are wondering how I ended up with 10 or more worms yet only started with one – my guess is that the “living material” I added when originally setting up the system contained one or more cocoons in it. Either that or the one worm was an adult, and already fertilized.]

For the new system I definitely wanted to add something that would (hopefully) balance the less-than-ideal walnut shells. The first thing that came to mind – something we have a good supply of in this household – was banana peels. My rationale is that the peels should offer much more food value than the shells, and should break down into a nice habitat material for the worms.

Over the past few weeks I have been stock piling both materials in preparation for getting this system set up – and yesterday I decided to get the ball rolling.

Step 1 involved dumping in all the walnut shells – 3.7 lb worth! If you’ve ever felt how light a walnut shell is, you’ll know that this translates into a LOT of shells! 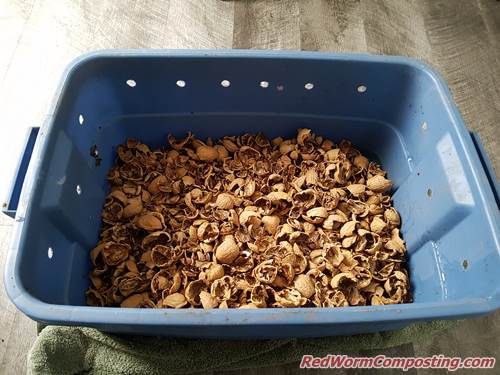 Next I dumped in 5.46 lb of banana peels. Some of these have been sitting for quite some time, so there was a fair amount of liquid down in the bottom of the holding bag. 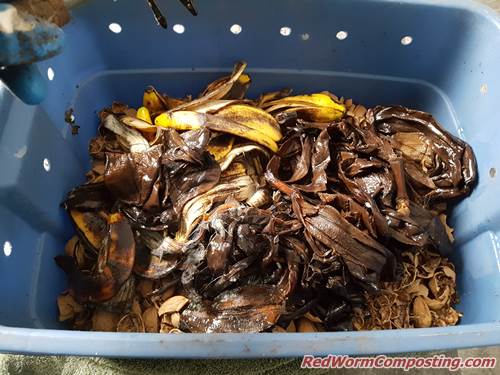 I then mixed the shells and the peels really well. 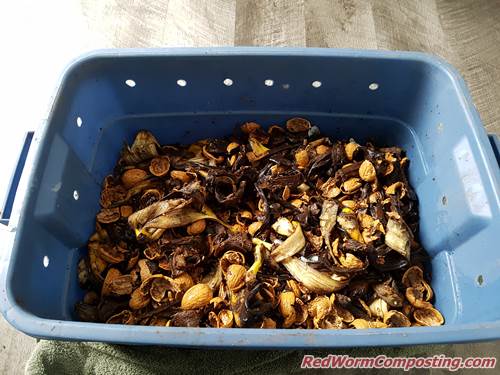 Originally, I had planned to then leave the shell/peel mix to age for a while before adding any worms. But for the sake of jump-starting the experiment, and to reduce the risk of problematic conditions developing (eg excess fungal growth, funky smells, fruit flies etc), I decided to add some worm-rich material right away.

As it turns out, I had the “perfect” material for the job! Last fall I brought in some feed bags of worm-rich material from outdoor beds with the intention of concentrating the material for the “worm-mix” product I sell up here. I ended up shutting down early, simply leaving the bags to sit in the basement.

These are breathable bags and no water or food has been added since they were brought in, so the material itself has dried out a fair bit. The worms have shrunken down quite a lot as well. But it is a beautiful, crumbly “living material” (with loads of tiny worms in it) so it ended up being the perfect addition to the new system. 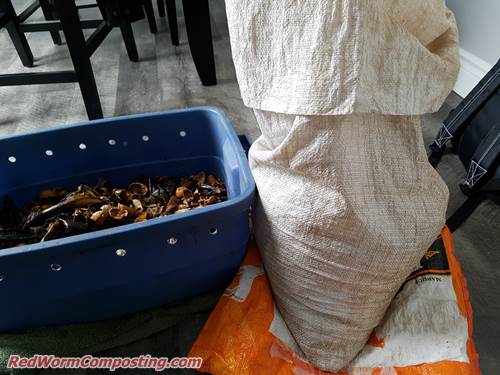 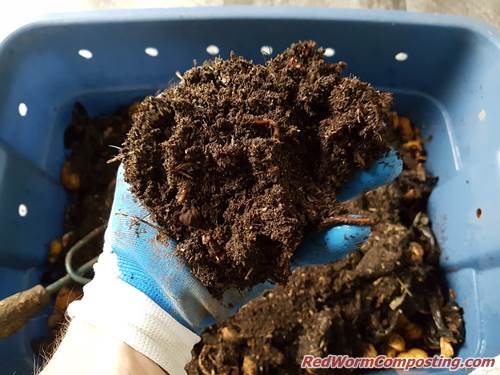 I mixed in maybe 5 or 6 handfuls of the material, and then layered a little more over top. 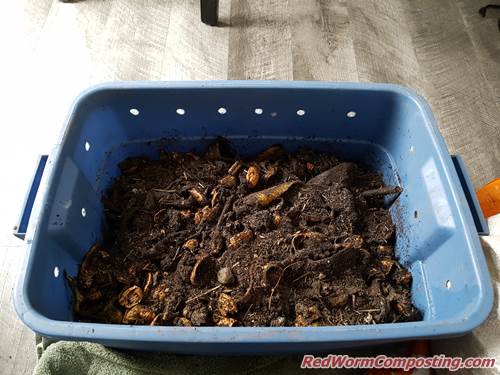 Apart from stocking the system with Red Worms, this mix will add all sorts of other beneficial organisms, and will help to wick up any excess moisture from the banana peels.

Similar to my “Tiny Red Worm Rehab” system, this bin will only have a garbage bag as a cover.

I am really interested to see what happens with this system. I am confident that the shells will break down a lot more readily with a steady influx of banana peels, I have little doubt that the worms will thrive – and I suspect that the finished compost is going to be really nice stuff (with maybe a nice extra boost of K from the peels).