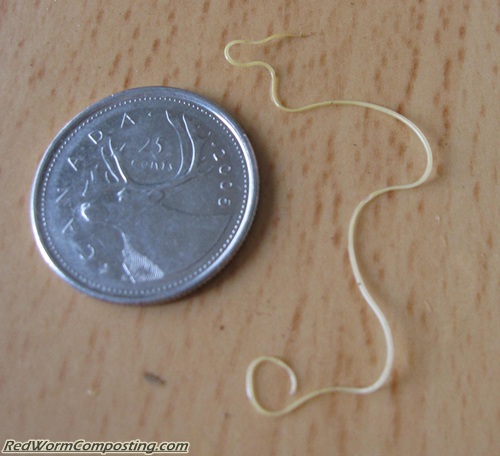 Several days ago I was quite surprised to come across an unusual worm sitting on the edge of my rain barrel. Given its jerky flailing movements, on first glance I assumed it was some sort of long “inch worm” (i.e. a type of caterpillar), but I quickly realized it was something else altogether. Given my background in identifying aquatic invertebrates (what I used to do as a “job”), I’m generally not thrown off by any small creepy crawly critters I come across on my property. This worm definitely had me stumped though.

My first guess was that it was some sort of giant nematode. As such, I did some digging online to see if I could track down any types of nematode that are not only large, but also terrestrial (or at least semi-terrestrial). Most of the nematodes I’ve come across in aquatic samples (and in my worm bins for that matter) were very tiny – either microscopic, or barely visible. As I learned, there IS a family of large-bodied parasitic nematodes, Mermithidae, that seemed to fit the bill. According to the Wikipedia entry for these worms, they are most commonly parasites of arthropods (insects, spiders, crustaceans etc), but there was also mention of the fact that a few species are known to parasitize earthworms!
😯

Ok – so I’m not really worried. In fact, I don’t even think these are mermithid nematodes at all! Another type of large nematode-like worm is the “Horsehair Worm” or “Gordian Worm”, and I’m not sure why these didn’t come to mind right off the bat – I certainly found plenty of them in various aquatic samples I used to sort through.

Gordian Worms, like mermithids, are typically parasites of various types of arthropods (grasshoppers are one of the more common hosts, I believe) – not the adult worms themselves, but the larvae that hatch out from the eggs they lay.

Since finding my first specimen, I’ve started seeing more of them – generally after rainfall (something we’ve been getting a lot of lately). I collected a couple of them today so I could take some pictures. 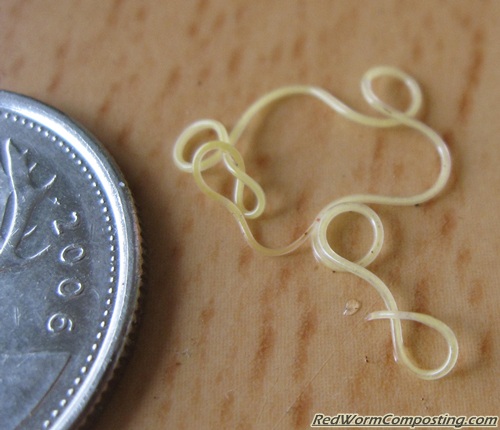 I will be very interested to see if I can determine what poor group of critters is going to be their host this year. I tend to have a decent population of grasshoppers and crickets each year so I’ll be keeping a close eye on them once they arrive.

Of course, just to be absolutely sure these worms aren’t up to no good, I will also be keeping a very close eye on my outdoor Red Worm beds!
8)

By the way, I came across this video on YouTube featuring a bunch of these worms in someone’s garden. These look exactly like the ones I’ve been finding around my yard

If you want to be really grossed out, check out this video showing horsehair worms leaving their cricket host: