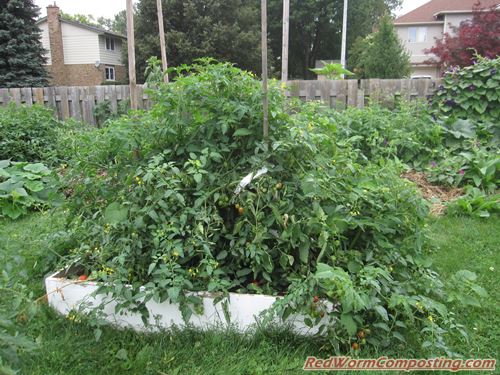 I decided to check up on my “Vermi-Fertilization & Watering System” today. It’s been about a month since my last update.

All in all I have been pretty lazy with the system itself, as well as with the plants growing in the raised bed. I have continued to add compostable waste materials to the bin, but have done nothing to optimize the materials before adding them. I also haven’t been doing much to maintain worm habitat quality inside – adding lots of food with virtually NO absorbent bedding materials (do as I say, not necessarily as I do! haha).

Initially, I was tying up the tomato plants so as to maximize upward growth and keep the bin fairly accessible – but in recent weeks I’ve been getting lax with that as well. The plants have continued to thrive, though – even with pretty dry conditions and less-than-consistent watering. I actually had trouble accessing the bin lid today due to massive jungle of tomato foliage that has descended upon it.

While I was out there I managed to quickly harvest a nice heaping bowl of ripe grape tomatoes – so the productivity of these plants certainly doesn’t seem to have been hampered by my neglect. 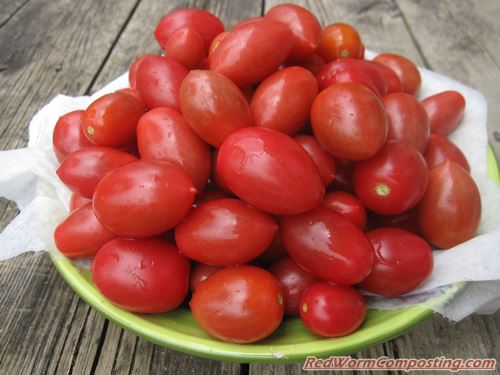 Something very interesting I noticed a little while ago – but failed to capture on film (didn’t have my camera with me) – was that there were soldier fly prepupae on the upper rim of the bin. Today, with camera in-hand, I was able to find them again.
As it turns out, there are quite a few of them up in this area and on the underside of the lid. I found plenty more down in the food zone as well, but strangely couldn’t seem to locate larvae (i.e. earlier “instars”). Perhaps things are starting to wind down for them now that we’re getting on towards September. 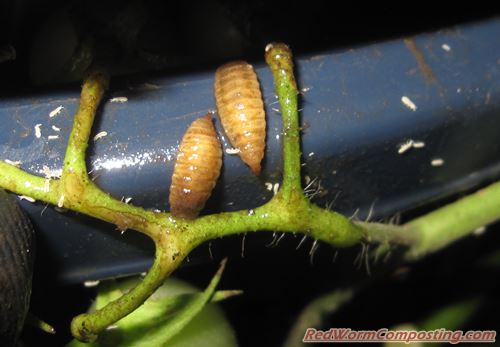 Given my less-than-exemplary treatment of the worm habitat inside the bin, I wasn’t too surprised when I didn’t find ANY worms while digging around (LOADS of other critters though). I have little doubt that there is still a thriving population of them further down however (remember, I added loads of bedding material when I first set up the system). We shall see how things look at the end of the season!

In an effort to make up for some of my neglect, I decided to add a couple buckets of a “homemade manure” blend I’ve been perfecting this summer. Unlike the other HMM I’ve written about previously, the primary components of this mix are timothy grass (comes in the form of dry cubes – soaked and used as a horse treat) and hydrated wood stove pellets (aka “sawdust” – lol). Once the mix goes through a brief heating stage, and is then allowed to sit for a while it really starts to look (and smell) like a nicely aged horse manure. Very nice stuff! 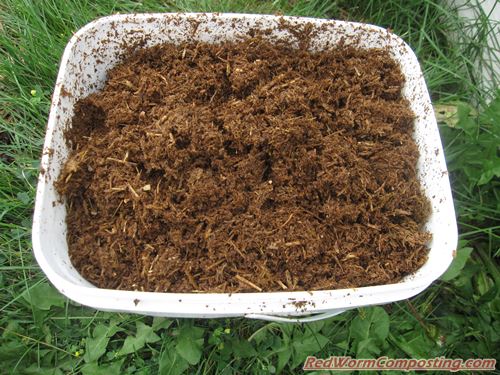 Old habits (and laziness – lol) die hard, it seems. After I added a thick layer of the homemade manure mix I then proceeded to add a big bag of (mostly bulky watermelon) waste over top!
😆

Red Worms a Threat to the Nation’s Water Supply!