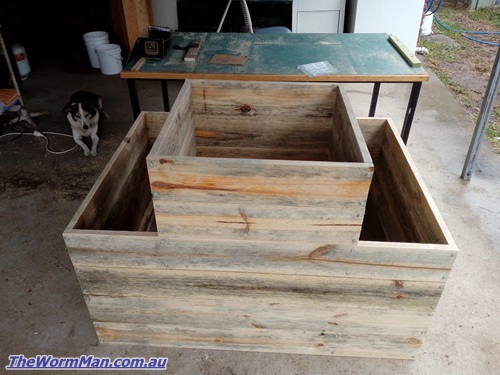 Teaser shot of the new vermicomposting planter design Brian and I came up with.

If you are on the RWC e-mail list, you will likely know that I have some fun vermi-gardening projects planned for this year. One such project involves the creation of a “vermicomposting planter” with the help of my good friend Brian Donaldson (one of the admins for the RWC Facebook Group).

I have certainly worked with various forms of integrated vermigardening systems (basically systems that combine vermicomposting with plant growing) – eg. vermicomposting trenches, various types of worm tower, vermi-mulch beds etc etc – but the planter idea is something I’ve really wanted to try for quite some time (and it’s likely been the building aspect that has held me back from actually moving ahead with it).

I really like the overall concept and simplicity of worm towers (and Garden Towers) – but I’ve always felt that they (usually) don’t put enough emphasis on the vermicomposting process. So in designing this planter, I knew it would be important to include a prominent worm zone – designed to provide the worms with optimal conditions and space for serious waste processing.

That said, I also wanted the planter zones to be big enough for demanding crops like tomatoes and squash-family plants. Part of the inspiration for this planter came from the system created by Al Gracian (creator of the awesome “Albopepper” website and YouTube channel).
Here is a video showing his planter:
Compost Worm Bin / Grow Box Garden Planter – part1

As much as I love Al’s design, I knew I would want the planter boxes to be bigger, and with a wrap-around configuration.

The picture above (of our new planter) is not of the finished system, but it does give a pretty good idea of overall appearance and layout.

Brian is very close to completion, so I will have more news to share about all of this soon (and of course, I will be attempting to create one for myself as well).