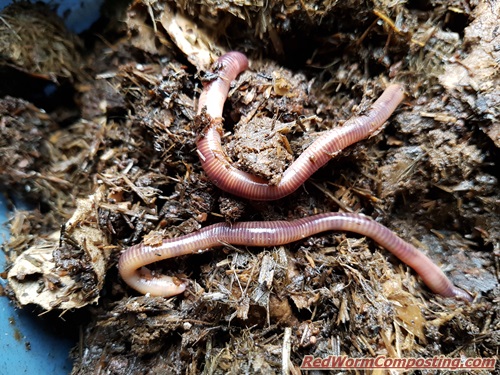 It’s been a little while since I first mentioned plans to have a Euro-growing competition with Larry Shier (after he challenged me), so some of you may be wondering what is going on with that.

What’s funny is that for all the excitement and smack talk, neither Larry nor myself were actually ready to kick off the challenge! lol

Yes we both have Euros, but they’ve been neglected a bit – and there are Reds mixed in with them – so we had to make absolutely sure we were starting with the correct worms (Euros tend to look at lot more like Reds when they are neglected). 😉

[UPDATE: Larry doesn’t actually have Reds mixed in. He had them in a “Paley System“, so they were very small, and their maturity difficult to assess.]

I decided to add aged horse manure to the small system I knew contained some Euros – and I am happy to report that I have at least two breeder-sized Euros in there now, so I am good to go.

I haven’t checked in with Larry, but my hunch is that he’s likely close to being ready as well.

Phase I of the challenge will involve keeping two breeders in the same (new) bin until they have laid 5-10 cocoons. Next, the cocoons (whatever final number we decide on) will then be moved to another system for hatching out and growth. They will likely be allowed to grow to maturity (when clitellum appears) and then allowed to stay in the system for some agreed-upon period of time for additional fattening.