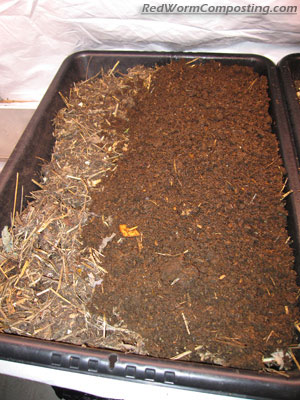 As much as I am a die-hard worm composting fanatic, I have always considered it as one “piece of the puzzle” in terms of creating sustainable systems – and oh, what an amazing little piece of the puzzle it IS!
🙂

I remember coming across a fascinating video online a number of years ago. Unfortunately I was never able to track it down again after that. It featured a ‘living machine’ system, containing a series of stages that all fed (literally) off one another – the waste of one stage essentially became the ‘food’ for another. It set up by Dr John Todd, a personal hero of mine who has been involved in this type of work for many years (he was one of the founding members of the New Alchemists back in the early ’70s).

This particular system started with brewery waste (spent grains/hops) as the initial input. This material was used to grow oyster mushrooms. The ‘compost’ produced via the fungal digestion of the brewery wastes then became food for Red Worms, which then produced even better compost, and they themselves became food for Yellow Perch in an aquaponics system. The waste water from the perch was used to grow microbes, then eaten by freshwater prawns. It was also used to fertilize tomatoes and ornamental plants! All this from a single input of “waste”. Pretty amazing stuff.

Anyway, due to my fascination with these sorts of systems I am always thinking of different ways to integrate vermicomposting with plant production etc. A prime example would be my vermicomposting trenches from last summer.

I haven’t written about it yet, but I’ve actually been thinking about how I can convert my big straw bale worm bed (my winter system) into a giant food making machine once the warm weather arrives. I’ll likely erect support beams around the outside and make a giant trellis structure, or simply hang some netting to allow climbing legume crops to spread out and take advantage of the sunlight. Aside from producing lots of fresh food, one of the advantages of this approach is that it will help to shade the bed in the summer, when overheating will be a potential concern.

Obviously there isn’t much I can do with that bed at the moment (as far as crop growing goes), so I thought it might be fun to grow some plants in a couple of my indoor beds. I keep two trays under an 80 watt grow light at all times, so it would obviously make sense for these to be the grow beds. Yesterday, I spread some well-aged worm bedding (it used to be aged manure with straw, but is now essentially a rich compost) over top of one of the beds, then sprinkled in some basil seeds and sprayed it with water. I am planning to add chives to the same bed, and likely some different lettuce varieties to the other bed.

I will continue to add ‘waste’ materials to the one side of each bed (which will in essence become a mini vermicomposting trench) and see how it goes (or should I say ‘grows’ – haha). I will of course provide updates here on the blog.

Do Earthworms Contribute to Global Warming?