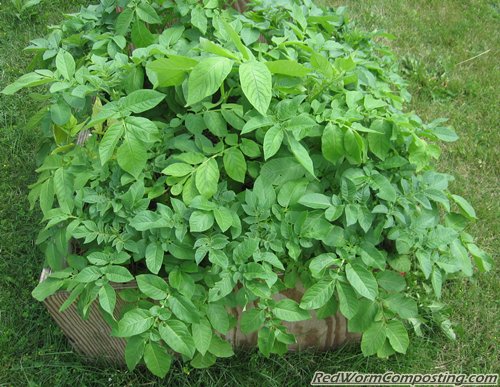 The potato plants are thriving in this vermicomposting bed

One month ago I wrote about some experimental grow boxes I had set up to see how well potatoes and bush beans would thrive in an active worm composting system (see ‘Worm Bed Potato Gardens‘). I was initially a little pessimistic about my chances of success, since unlike the vermicomposting trenches – which are essentially separated from the actual main plant growth zone – the potatoes would actually be growing right in the composting mass. My worry was that the volume of material in the bin would not only continue to decrease, but would also be unstable in general – due to all the activity of the worms down below.

In all honesty, the bush beans have not really thrived at all. My suspicion is that this has something to with the fact that, as legumes, these plants rely on a symbiotic relationship with Rhyzobium sp – the specialized group of bacteria that help them fix nitrogen. Given the fact that there is no soil in these boxes, and that it is a microbially-competitive environment (likely favoring those species adapted for life in a compost heap), it’s not really all that much of a surprise. Interestingly enough, aside from showing fairly poor growth, the bean plants have been quite yellow in color – often an indication that a plant is deficient in nitrogen. I did attempt to inoculate the plants with some soil (and plants) from patch of Black Medic (Medicago lupulina) – another legume – growing in my lawn, and it actually seemed to work (it worked very well in some other bean grow boxes I will write about in another post). I think it was simply a matter of being too little too late however.

As for the potatoes…

One look at the picture above should tell you just how well they are doing! I am starting to think this method may actually be a REALLY great way to grow potatoes! Of course, the real test will be to see how the potatoes look once it is harvesting time, but I’m certainly feeling optimistic! One or two people mentioned (in comments after the last potato post) the fact that it actually helps to continue mounding up material around the stem of the potato plant as it is growing, since this can lead to the formation of more tubers. As such, all the sinking and layering of materials taking place in these boxes may actually be exactly what these plants need to produce more spuds.

Essentially, what I’ve been doing is adding aged horse manure then covering it with straw. Once the level sinks noticeably, I add more manure (on top of the straw), along with a new layer of straw over top.

Aside from seeing how the potatoes would grow, I also obviously wanted to see how well the system would function as a worm bin. Initially, I was a little worried that the worm habitat would overheat by sitting out in the sun all day long. I’m sure our relatively cool summer has helped, but in all honesty I think my fears were unfounded. The worms seem to be doing extremely well, especially now that they have a nice canopy of foliage to shade the bin.

All in all, I am super excited about the results of this experiment since it has far exceeded my expectations…so far!
Stay tuned. More updates on the way (I will write more about my other vermi-gardens as well)
8)

Ants and Snails and Maggots in Your Worm Bin?