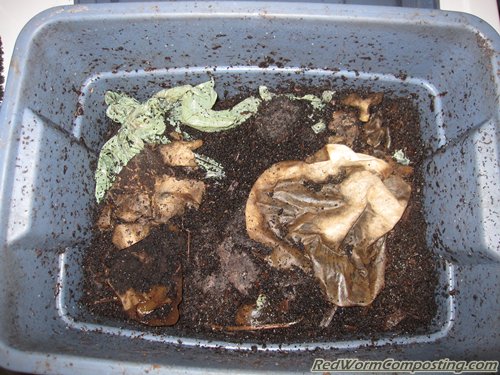 It has been a very long time (almost two months) since my last dryer lint worm bin update, so I figured I should check on the bin the other day to see how things are shaping up. It’s funny – a lot of people seem to stress out about making sure they don’t starve their worms, but the fact of the matter is that it is a LOT harder than you might think. I have tested this (without really thinking about it too much – haha) on many occasions – this lint bin being a prime example. Apart from the food that was added when the bin was set up initially (at the beginning of April), and the odd batch of coffee grounds since then (I think I’ve added about three coffee filters with grounds), this bin has received nothing in the way of inputs – yet the worm population seems to be thriving.

When I last wrote an update, it looked as though most of the lint was still intact. Well, it definitely looks like a lot more of it has decomposed now! There didn’t seem to be much in the upper few inches of the bin that looked like lint. Further down in the bin was a different story however – near the bottom on the bin I found layers of wet, compacted lint that looked as though it hadn’t undergone much decomposition at all. 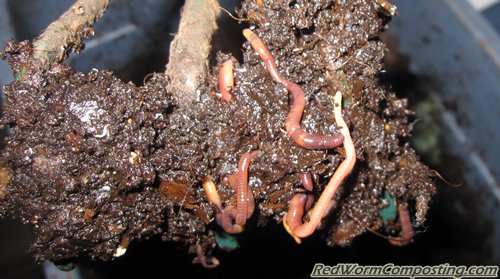 This is not surprising at all – I have seen this many times in plastic tub worm bins, and it is almost certainly due to the lack of oxygenation in the lower reaches of the bin (I don’t have holes down there).

All in all, I must say that I’m pretty impressed with lint as a worm bin bedding material. I think it would be especially valuable in a bin that also contains other bedding such as shredded cardboard, since it provides a bit more of a wet ‘habitat’ zone, while the cardboard etc would be valuable for soaking up moisture and more quickly balancing the C:N ratio in the bin. I think the next step will be to test this on a larger scale – perhaps I will try adding a bunch of lint to my big outdoor bin, or my trenches.

Anyway – I will certainly keep every one posted!
8)