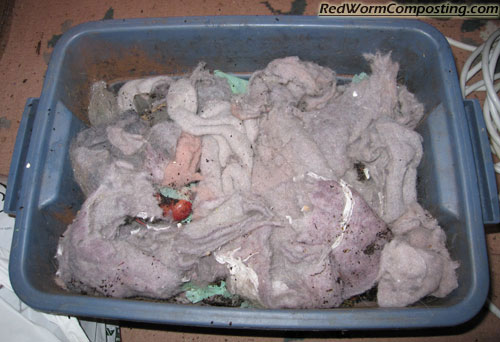 I’ve written previously about my attempts to use dryer lint in my vermicomposting systems. Unfortunately that project didn’t really work out too well, since the bins I added the material to have a fairly fast turnover, due to worms getting harvested for orders on a regular basis. As such, I basically shelved the idea, hoping to revisit it at some point.

Well, that time has arrived!
🙂

I decided that, rather than adding lint to my active bins, I would instead set up a brand new system using only lint as a bedding material. Not sure why I didn’t think of it before – but hey, better late than never!

As I’ve written before, an ideal worm bin bedding should be 1) absorbent, 2) carbon-rich (high C:N) and 3) structured to allow for decent air flow. In all honesty, I think we have all the bases covered with lint – but we shall see.

Setting this system up had he wondering why I never thought of something like strips of old t-shirts as a bedding material. While it will likely take longer for cotton to break down than something like shredded cardboard, I think it would provide an excellent habitat matrix.

Remember back when I added a Natura Eco Cloth to my worm bin? Same sort of idea.

Moving on to methodology… 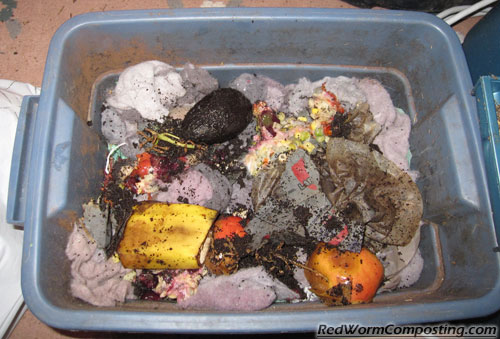 I basically set up this system the way I always recommend setting up a new bin. I added a thick layer of lint in the bottom, then a layer of food waste – and continued upwards with alternating layers. As per usual I finished off with an upper layer of lint.

As you can see in the picture, I was pretty lazy with the food waste – no chopping/blending etc. I am going to leave the system to sit for a week or so. During that time I will likely check on it, and mix and/or add water as needed.

I will of course keep all y’all posted!

P.S. One thing I almost forgot to mention. As I’ve written previously, I don’t really recommend this approach if you use dryer sheets, since I’m not really sure what chemicals might end up in the lint. If you haven’t tried re-usable dryer sheets, you might want to look into it – they lose their effectiveness after awhile (we don’t use anything currently), but it’s nice not having to buy new bounce sheets (not the mention avoiding the chemicals).