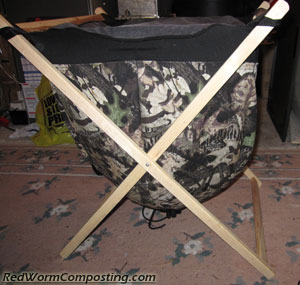 To say this update was ‘overdue’ would be a pretty serious understatement to say the least! So I won’t say it.
😆
I will however say this…

Well, that time has finally arrived – I performed my first compost harvest from the bottom of my camo Worm Inn. In all honesty (and as per usual with my various projects, it seems), I kinda neglected the system, so I wasn’t really sure what I’d find at the bottom. I had originally hoped to add 3 lb of worms, but unfortunately I was never able to spare that many due to steady demand from customers. I hate to admit it, but I even went so far as to harvest some worms from the Inn on a couple of occasions!
🙄

What’s cool about this system is that it handled neglect quite a bit better than the wooden stacking bin I used for my “Four Worm Reproduction Experiment“. I find that the Inn offers an excellent balance between moisture-retention and oxygenation of the composting materials (you may recall that the shallow trays of the wooden system caused everything to dry out very quickly).

Even though it has been a number of months since I first set up this Worm Inn, I thought for sure that my ‘false bottom’ of egg carton cardboard would be essentially intact. As it turns out, it was quite well decomposed, and there seemed to be lots of nice ‘black gold’ down in this lower zone. 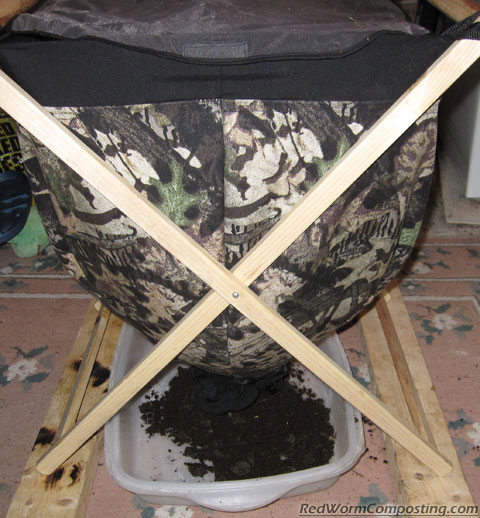 Given the weight of the Inn and the relatively small size of the laundry hamper I’ve been using, I ended up having to prop it up on wooden planks in order to easily extract some compost from the bottom.

Some people have expressed concern re: the potential for having everything fall out the bottom at once when it comes time to start harvesting. My suggestion has always been to constrict the bottom with one hand (this is once the drawstrings are loose) and simply let the compost out slowly and carefully. As I discovered, you don’t even need to be that cautious. By the time the Inn is ready for the first harvest, all the material near the bottom has become quite compacted. I actually had to use a hand rake in order to get a decent batch of vermicompost.

I’m sure people are wondering about the worms as well. I honestly thought that there would be at least a few worms down at the bottom, and was actually quite shocked to see none whatsoever. I saw white worms and some other critters, but no worms. I noticed a few cocoons, but it certainly wasn’t loaded with them.

Lastly, the quality of the material really blew me away. It reminded me of the beautiful stuff I harvested from my outdoor bin last summer. The difference of course, is the fact that this material has not been exposed to the elements (rain, freezing etc), so it’s probably even better. It was a nice dark colour, had a rich earthy aroma, and a crumbly texture. Certainly nothing like the sloppy stuff I’ve grown accustomed to finding in the bottom of my enclosed plastic bins over the years. 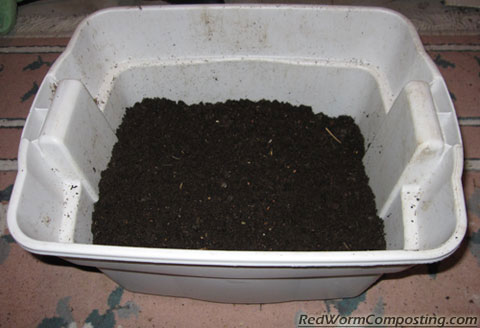 All in all, I am very impressed. I was fairly optimistic about the effectiveness of this system, but in all honesty it has definitely exceeded my expectations.

The next step is to start harvesting compost on a regular basis. I’ll be very interested to see how much it produces! I also want to test out the compost to see if it is as good as it looks.

Moving on to my other Worm Inn…

In my last update, I said I was going to stick with using Euros in that system (even though they were all congregating down in the bottom). Well, shortly after writing that post, I actually decided to move them to a bin better suited for their moisture-loving tendencies. A few weeks ago I simply set up the second Worm Inn with Red Worm inoculum (old bedding material containing loads of cocoons and baby worms) . Not much to report on there just yet, but I will certainly write more about that system as it matures.