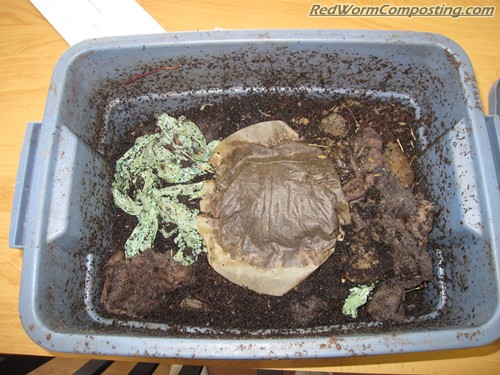 A recent comment from a reader reminded me of the fact that it’s been more than a month since my last lint worm bin update, so I decided to open up the bin and have a look.

From the looks of things, not all that much seems to have changed from the last time I opened up the bin. The worms DO seem to have settled in nicely though, and must be doing ok with the solely coffee-grounds (and lint) diet they’ve been provided with since there are lots of them and they appear to be healthy and lively. 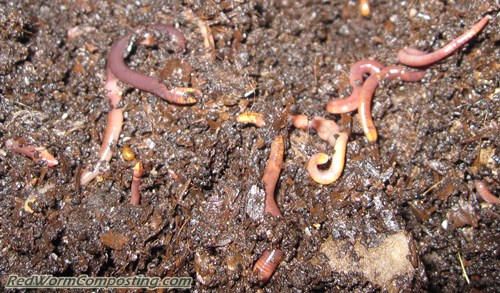 The lint itself seems to have broken down a little, but is definitely proving to be a lot more resistant than my usual shredded-egg-carton-cardboard bedding. I was happy to see that there wasn’t any pooling of liquid in the bottom of the bin, despite the fact that the contents appear to be nice and wet (just the way the worms like it). I’m sure this is at least in part due to the coffee-grounds diet. Fruit and veggie waste would certainly release more water.

I thought I would see more colonization of the lint by the worms, but only found a few small ones actually burrowed into it. This seems to indicate that the material might not have the ‘habitat’ value I was expecting. We’ll see how it fares over the long-haul though.

Apart from the Red Worms, there seems to be a fairly diverse population of critters in the system as well – unfortunately including a healthy population of fungus gnat larvae! Oh well, I guess this is the price I pay for being so carefree with my experimentation.
😉

Anyway, that’s basically all there is to report on for now. I’ll try to remember to post another update in about a month or so.