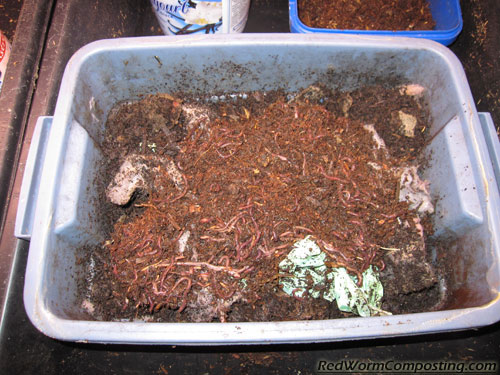 I just wanted to post a quick update re: my Dryer Lint Worm Bin. Early last week I finally added some worms to the system. Given the tiny size of the bin I decided to only add 1/4 lb of Red Worms (Eisenia fetida).

There was already some food waste (mixed in with the lint when set up) that was nicely decomposed for the worms, but I’ve also added some coffee grounds (from my coffee maker – not my big box of grounds outside).

Initially, the worms seemed a little restless – crawling up on the sides and underside of lid (very common) – but they certainly seem to have settled down nicely, and appear quite content down in the lint/waste mix. Digging around, I see that they are very responsive and energetic – so all looks good!

I’ll be really interested to see how this system matures over time. As mentioned, the bedding (lint) will very likely take a fair bit longer to decompose than shredded cardboard does, so I’ll be curious to find out what sort of vermicompost production we end up with.

I’ll likely provide another update in a few weeks.
8)

Red Worms By The Gob