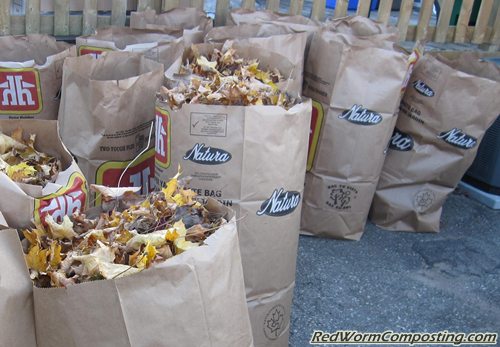 Yesterday I did something that I wouldn’t normally do, and the results were very cool!

As I was driving down my street towards home I saw one of my neighbors raking leaves in his yard (and could see that he had many bags of leaves already sitting in his garage). On a whim I pulled over, rolled down my window and asked if I could take the bags off his hands (knowing he would simply be putting them out for pick-up this week).

While this might not seem like a big deal for a lot of people – this was actually completely out of character for me! I’ve certainly had conversations with various neighbors (including this particular gentleman) before – but my natural tendency is always to shy away from such interactions. As such, I don’t really know any of my neighbors very well, even though we’ve lived in our current location for five and a half years!

No too surprisingly, the neighbor was more than happy to see his leaf bags disappear, so once I had parked the car I hastily ran back over and started hauling them back over to my place (he was off in another part of his yard by this point). This could have easily been the end of it, resulting in a nice little haul of leaves for my worm beds, along with a couple of (self-administered) pats on the back for stepping out of my comfort zone. But when I noticed that the neighbor was once again out on his front lawn rounding up more leaves I decided to head back over to lend a hand. I knew this meant that I would actually have to converse with him (haha), but I figured it was the least I could do to return the favor.
Well, long-story-short, we ended up having a really enjoyable conversation, and it’s safe to say I’ve made a new friend in the neighborhood.

As great as it is to have all these bags of leaves for my worm beds (will be writing about my winter preparation activities soon), as it turned out, the real “score” ended up being the friendly interaction with the neighbor. I learned a lot more about him (and about the neighborhood in general), and he now knows ME a lot better as well. It’s so easy to make generalizations about people we don’t know, and to assume they are totally different than us – yet it never ceases to amaze me just how similar we all really are!

One of the topics of conversation, of course, was my kooky backyard composting activities (in plain view from his front window – the and reason given for taking the leaves from him). I explained (half jokingly) that all of it was just a typical “day at the office” for me – part of my “job”. I expected a look of surprise, or perhaps some sort of deer-in-headlights blank stare, but he actually seemed to think it was all pretty cool. He explained that he and his wife didn’t really have all that much time for gardening etc activities due to their busy work schedules, but that it was something he’d like to get into at some point.

I realize that none of this is earth-shattering by any means, but the big “take away” for me was the fact that it’s really easy to make a positive connection with neighbors and other people we encounter on a regular basis. For those of us who are trying to spread the word about vermicomposting, and other earth-friendly activities, this represents a great opportunity for introducing people to these topics in a very friendly manner!

There is a well known saying in environmental circles, “think globally, act locally”. Being the rather shy web-guy that I am, I’ve tended to go at it the other way around – focusing primarily on spreading the word online (which can be VERY effective, don’t get me wrong), while doing very little in my own region. I’ve certainly spent a lot of time talking with people who have come to pick up worms – but all of this reminds me that I should make more of an effort to reach those who are unfamiliar with the concept of vermicomposting – starting with those who live in my own neighborhood!

Anyway – just some thoughts rattling around in the ol’ noggin!
8)