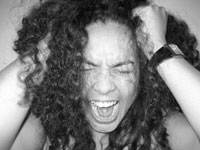 Yesterday I decided to try a fun little experiment on the Red Worm Composting Facebook Fan Page. I posted the question, “What is YOUR biggest frustration with vermicomposting?” – then waited.

I didn’t have to wait very long – the answers started coming in almost right away! As of this morning, there were 47 responses! Have I mentioned how much I am LOVING the Facebook Fan page? I don’t think there has been a single blog post (here on the site) yet that has received 47 comments in less than 24 hours – in fact, there might only be one or two that have received that many at all! Very cool indeed!
8)

I didn’t just ask the question to see how many responses I could get, though! I really wanted to see what sort of “frustrations” people are actually experiencing. In the “book” I talk about some of the things I think might be hampering a more widespread (mainstream) acceptance of vermicomposting. My suspicion has been that a lot of this can be linked to “critter hassles”, rather than a worm phobia. I am pretty sure that more people have started-then-stopped vermicomposting more often due to the presence of fruit flies / gnats / mites / maggots etc than due to anything else. I don’t have hard data here, but it’s something I see coming up over and over again.

Of the 39 “frustrations” I wrote down from the group of comments, 19 made mention of some sort of annoying critter (if not more than one) – that’s 48.7%!! Not too surprisingly, most of the critter concerns had to do with flying pests (such as fungus gnats and fruit flies). One thing that DID surprise me, though, was that I didn’t see any mention of black soldier fly grubs – and there was only one mention of “maggots”. Based on the number of emails I have received about “big ugly grubs” (or something similar), my impression has been that BSFLs are a hassle for a lot of new vermicomposters (with outdoor or semi-outdoor systems).

The next most common frustration seems to be harvesting. There were 8 comments (20.5%) that mentioned this as a hassle. I am not too surprised about this one either – it can be a real pain separating the worms from the vermicompost, ESPECIALLY when using some sort of plastic bin system (i.e. a system that results in higher moisture content).

Here are some of the other things people mentioned:
– Blue Worms (invading)
– cold weather
– mold
– other people getting annoyed or not understanding
– summer heat
– finding worm suppliers
– takes so long for results (including worms not growing as fast as expected)
– too much waste – not enough worms
– stinky waste materials
– too messy

What’s really awesome about this little “experiment”, aside from making me realize I need to spend more time on the FB Fan Page, is that it helps me to see some of the topics people are really keen to learn more about!

I’d love to get some more input though – are there any other major frustrations you have with vermicomposting? (don’t worry if they’ve already been mentioned).

My aim is to start writing some posts addressing these concerns.
Thanks again to all those who participate!
8)