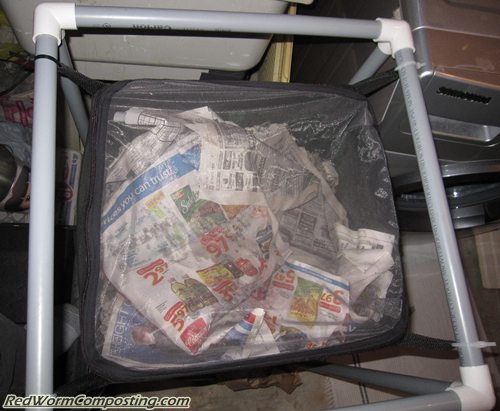 It has been ages since my last Worm Inn Journal update (see “Worm Inn Journal-08-27-10“), and I’m just generally aiming to get things back to “normal” on the blog now that my two “babies” (Spencer and “Da Book”) are here!
🙂

As you may recall, I set up my current Worm Inn back at the beginning of August (see “Worm Inn Journal-08-02-10“), using the sad little worms from my “Worm Cocoon Hatching Experiment“.

Initially (for the first two and a half months or so), the system sat out in my backyard where it ended up getting invaded by fruit flies (with all the dying tomatoes lying around in my yard I ended up with a huge fruit fly population explosion). Once I started noticing that we were getting some heavy frosts I decided to bring the Inn inside, rather than take my chances during the unpredictable weather of late fall. I was a bit concerned re: the possibility of ending up with a serious indoor fruit fly population, but as I discovered, a fungus gnat population had taken over where the fruit flies left off.

What’s interesting is that the addition of a fair amount of “compost ecosystem” material (primarily added to help compensate for a large quantity of wet food waste I put in the system) – then simply letting everything sit for awhile – seems to have resulted in a significant reduction in gnat numbers. We shall see though – I’ll likely be adding more food wastes and moisture in coming weeks so I wouldn’t be surprised to see a gnat “comeback”!

I didn’t dig around too much today, so I can’t say for sure how the worm population is doing. My hunch is that the worms are doing well (as you can see, I did find some healthy looking wigglers), but I think they are mostly hanging out in the lower reaches of the Inn where there is a higher moisture content. 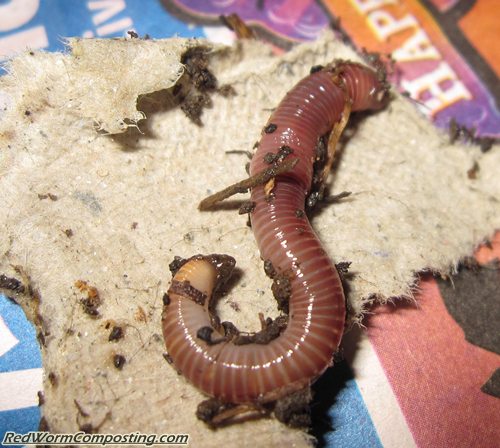 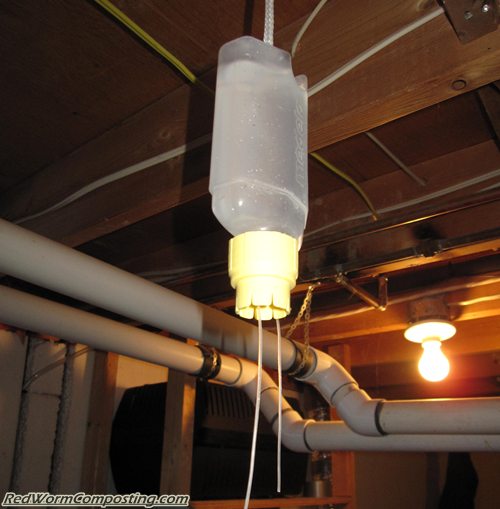 It only releases 1 or 2 drops of water every 30 seconds (just an estimate), but I think it’s going to be a great hands-free way to keep everything nice and moist without having liquid running out of the bottom. As you can see in the first picture, I have put some layers of newsprint on top of the main composting zone. I’ve been finding that this is a good way help retain and distribute moisture (rather than getting poured down in one location, it soaks the newsprint and is then gradually released into the materials down below).

Anyway, that’s basically all for now. I will certainly keep everyone posted (and on a more regular basis than I have been).
8)