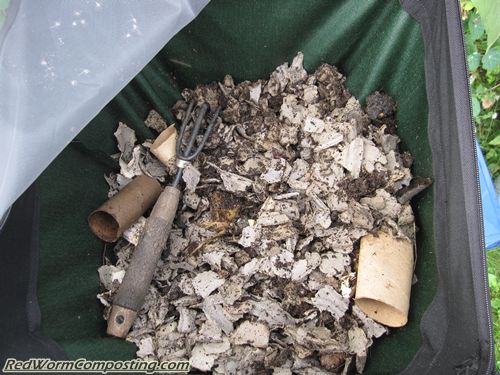 Some of you may be wondering how things how things have been coming along with my latest Worm Inn set-up. As you’ll more than likely recall, a couple of days after I set up the system, I added all the weeny (malnourished) wigglers from my cocoon hatching experiment. Generally, I recommend letting things age for longer than that, but the food waste I was using in this case had been frozen previously, making it much more microbe-friendly once it thawed out (since freezing reduces structural integrity of fruit/veggie wastes). I also mixed in some aged alpaca manure for good measure. Plus, when you consider where the worms were coming from, I could hardly imagine that the slightly-less-optimized-than-normal conditions in the Worm Inn would cause problems!

That being said, it’s been a bit challenging trying to determine how the worm population, as a whole, is doing. I’ve been making an effort not to disturb the system TOO much (rooting around with my hand fork etc), and the worms have made it clear that they want to hang out (at least for now) down in the lower reaches of the Inn. This doesn’t surprise me in the least, since that is where most of the “food”, and of course, moisture, is concentrated. The good news is that I have still been able to find worms – and the worms I’ve been finding are now larger than any found in my cocoon bins. I was even pleasantly surprised this week with the discovery of a mature worm (recall that no worms reached maturity in the cocoon experiment)! 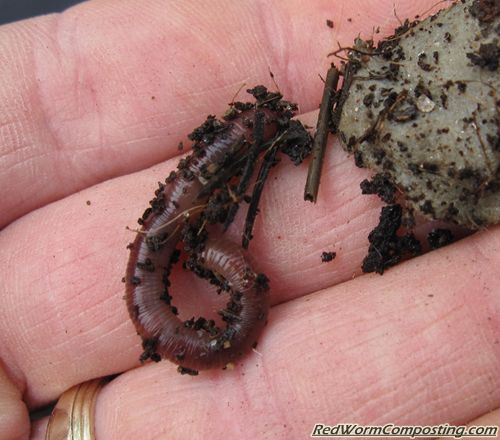 I’ve been finding that keeping a Worm Inn outside is somewhat different than keeping one indoors, as I expected would be the case. The contents of the Inn tend to dry out more quickly, and I’ve found that it’s much more challenging to keep the system free of critters that would be considered “annoying” indoors. Fruit flies in particular have made their presence known. It’s hard to say for sure how they got in, but in all honesty I can’t say I’m too surprised to find them. With plenty of overripe tomatoes rotting in my gardens these days, not to mention plenty of food waste in my trench beds, there seems to be a LOT of fruit flies hanging around the property in general. I’ve been opening up the Worm Inn a fair amount since adding the worms, and a few may have been able to get in as a result. OR, they simply managed to find a way in while it was closed up.

As I mentioned in my Worm Inn set-up post (Worm Inn Journal-08-02-10), Jerry (Worm Inn company owner) was kind enough to send along a nice new system with the stand kit I requested. What I forgot to mention, however, is the fact that this new system somewhat more “advanced” model than the ones I’ve used previously. The most significant upgrade (and something I absolutely LOVE) was the installation of a single zipper, as opposed to the previous double-zipper design. What this means is that instead of having two zipper heads (or whatever the technical term happens to be – haha) meeting – thereby creating a bit of a gap – the single zipper goes all the way around and closes tightly at the other end.

I should also point out that the drawstring tightening system was improved from the previous design. One of the reasons I’ve always recommended my drawstring tie-off method (to ensure a tight closure) when first setting up the system is because the drawstring system in the original models didn’t close really tightly – this wasn’t an issue once the system was up and running for awhile (which is why I would always end up untying my knot), since the lower compost tends to hold its shape, but early on there was more of a risk that worms etc could end coming out of the bottom. Anyway, I just wanted to point this out so that people don’t assume that you have to use the tie-off approach – this is not the case. I still like doing it for a little extra security, but that’s just me!

Getting back to the fruit flies…

With loads of them flying around outside, I wouldn’t be surprised if they somehow managed to squeeze their way in from the bottom. I’ve been amazed with the ability of house flies to somehow get into knotted plastic bags etc, so I can only imagine what a teeny tiny fruit fly could do! This is assuming they didn’t simply fly in while I had the system open (certainly possible as well). One other possibility (although, not in this particular case, as I’ll explain in a minute) is what I like to think of as the “Trojan Horse Little Critter Invasion Technique” (THLCIT for short).

I’m sure most of us are at least vaguely familiar with the story of the Trojan horse. The giant wooden horse was given by the Greeks as a “gift” to the Trojans – who they happened to be fighting at the time. Why anyone would accept a “gift” from their sworn enemy is beyond me, but that’s beside the point! Of course, the horse wasn’t really a gift at all – it was a very sneaky way for the Greek army to sneak into the well-protected city of Troy. The Trojans – not being the sharpest tools in the shed – had no clue, when they wheeled the horse inside the city, that there were Greek soldiers hiding inside. Short story a little longer…the Greeks jumped out of the horse in the middle of the night and opened the gates to the city, thus allowing the Greek army to invade and defeat the Trojans.

The point of this little story (and my overall analogy) is that sometimes it’s not so much a matter of critters crawling into your worm composting systems (Worm Inns, bins etc), but rather a case of them sneaking in on materials you happen to be adding to the system. Thankfully, they don’t have the ability to open up the system from the inside, thus letting in all their creepy friends! (haha)
Nevertheless, as most of us know all too well – they don’t need ANY further assistance once they are IN, since they all tend to reproduce like gangbusters!

In the case of fruit flies, when you add fruit wastes – especially in the case of fruit that’s been sitting around for awhile, or which has come from a warmer location – there can actually be fruit fly eggs already laid in the fruit! As alluded to earlier, this almost certainly is NOT how the fruit flies ended up in my Worm Inn. Like I said, I only used food waste that had come from my freezer. Freezing/cooking waste materials is a great way to make sure you are not inadvertently introducing fruit flies etc to your system. I just wanted to make mention of the “THLCIT” so that people can keep this in mind when adding new materials to their worm composting systems – ya never know what sorts of critters may be getting introduced! Another obvious example would be any “living” material introduced from outside – leaf litter, compost, soil, manure etc.

Now don’t get me wrong here – I’m definitely not suggesting that introducing various critters to your system is a “bad” thing – not at all! A lot of times it can actually help a great deal! Just as a quick example, I’ve found that the addition of really well aged manure can help to improve the “balance” in a worm bin – I’ve always suspected that this largely results from the diversity of organisms (including various small predators which will feed on fruit fly and fungus gnat larvae etc) that tend to live in this material.

Anyway – I think that’s enough of an eyeful for now (got a little sidetracked there! haha).
Will more than likely provide another Worm Inn update in a few weeks!
8)