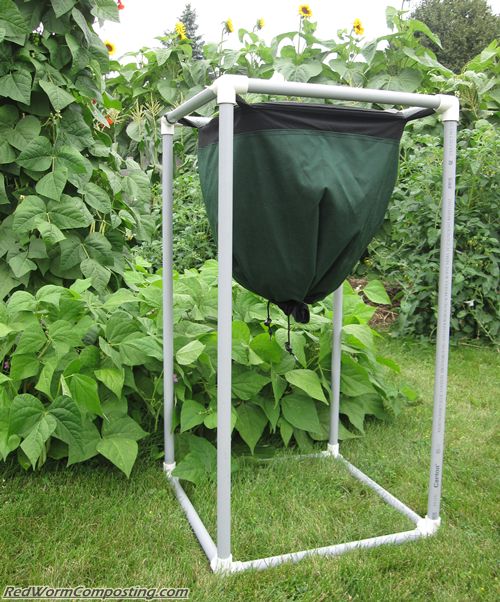 I am very happy to report that I am finally back in action with my ongoing adventure with Worm Inns! Many of you will likely recall that I decided to take down my “Overfeeding Challenge” Worm Inn back in May (see “Worm Inn Journal-05-13-10“) so that I could put all my focus on my outdoor systems and gardening efforts.

As you can see, for my latest round of Worm Inn fun we have a NEW look! The camo pattern is pretty darn sweet (lol), and I am quite proud of the wooden stand I managed to put together (with my dad) – but my supplier sent me a sharp looking green Inn (an unexpected surprise), along with the PVC stand kit I had requested!

Just as a review, the stand kit consists of eight PVC corner pieces and four zip ties. The PVC piping for the actual structure can easily be purchased at your local hardware shop (unlike the corner pieces, which can sometimes be a tad challenging to track down). I ended up buying my piping from Home Depot. It is 3/4″ schedule 40 PVC – not the fancy white stuff they were charging an arm and a leg for, but an inexpensive gray version that will be every bit as strong. It comes in ten foot lengths – you will need to buy three of these and then have them cut down to size (or do it yourself). To build the stand you’ll need eight 18″ lengths and four 36” lengths. 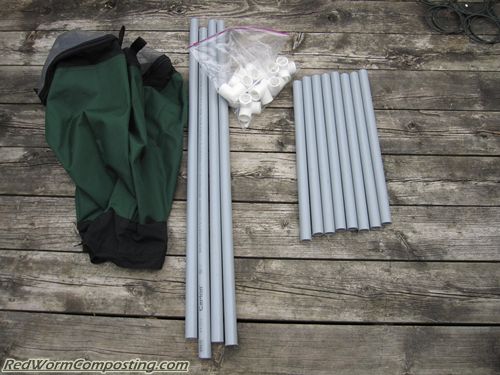 I’ve gotta say that I was kicking myself for procrastinating (waiting so long to buy the piping) once I started putting the stand together. I can’t believe how EASY it was! All said and done (including securing the Worm Inn with the zip ties), it probably took me 5-10 minutes MAX! Needless to say, it took a LOT longer to put together the wooden stand! 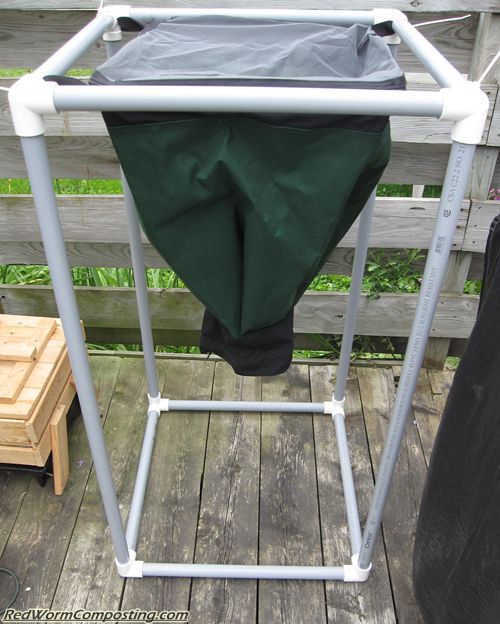 I’ve written a fair bit about setting up a Worm Inn, but the way I see it, there’s no harm in reviewing the process here. It is pretty simple and straightforward – basically just a bedding-food-bedding layering system. But BEFORE I did any of this, I made sure to secure the drawstring bottom. This consists of tightening the strings, then constricting the bottom with a couple of wraps around (with the string) before finally tying a knot (don’t go too crazy here – you want to be able to get it undone eventually! haha). 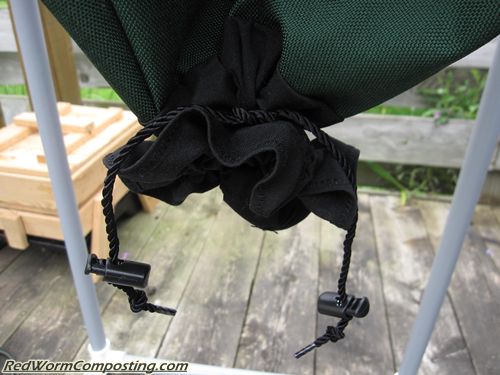 This is something I always do when setting up a new Worm Inn – just to make sure everything is nicely contained. Once there is a decent amount of vermicompost in the bottom of the system we can simply go back to using the drawstring opening the way it was intended.

The “bedding” I would typically use when setting up a small worm composting system is shredded cardboard – I’ve found that this alone works great. 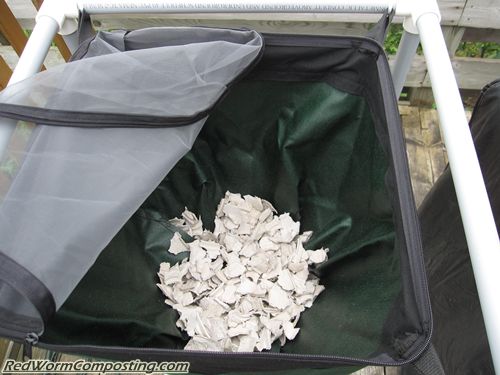 Today, because I happened to have a nice tub of coco coir just sitting around waiting to be put to good use, I decided to use some. Combining a really absorbant, fine-particle material like coir with a bulkier material like shredded cardboard is actually a great approach since you basically end up with the best of both worlds (water-holding + aeration). 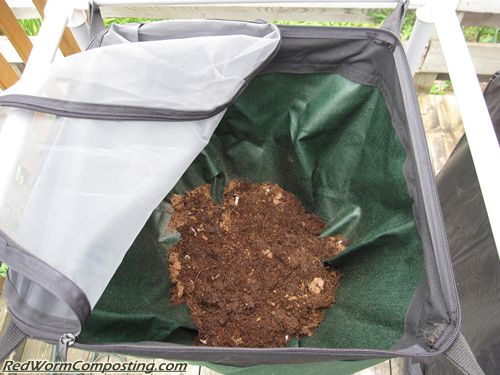 Adding the “food” was a very simple matter of dumping a bag of food waste that had been sitting in my deep freezer. Nothing fancy here AT ALL. Freezing is a great strategy in its own right though, since it does a great job of starting the structural breakdown of the materials. 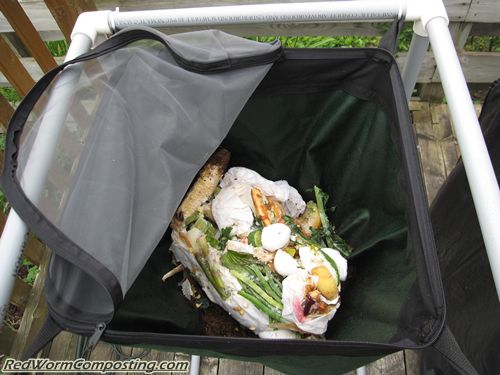 Once the food was dumped in, I simply covered it up with more coir and then a final (very thick) layer of cardboard. 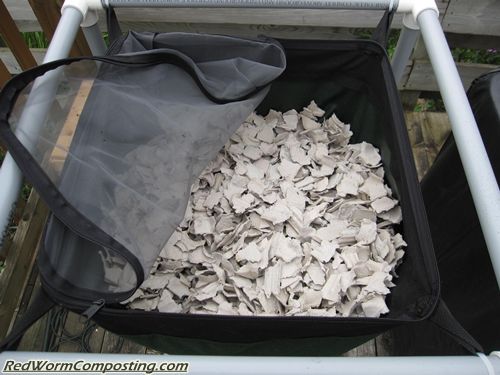 As you can see, I set up the new Worm Inn outside. I think I am actually going to keep it outside for awhile to see how it works in an outdoor location. As per usual, I will let the system age for a week or so before adding the worms.
I don’t currently have plans for any sort of off-the-wall experiment. I think for once I might actually use a worm composting system the way it was intended!
We shall see!
8)