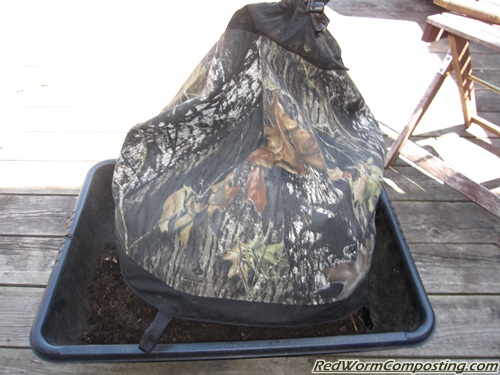 Some of you may be surprised to learn that I decided to dismantle my Worm Inn system (actually did this back at the end of April). Most of my focus these days seems to be on my outdoor beds, and outdoor activities in general – plus, I wanted to divert all that food waste to systems that need it more.

Part of my motivation also stemmed from the fact that I was REALLY curious to see exactly what was going on inside the Inn. There’s no doubt that the overall process has been working very well (after all, I’ve been putting heaps of food waste in the top and harvesting lots of nice vermicompost from the bottom), but I though it might be neat to see how things progress from top to bottom.

I certainly didn’t have the easiest of times getting the system off the hooks on my stand – I’ll definitely need to do some repairs before starting up back in the fall (was actually planning to get some better hooks anyway). I couldn’t believe how heavy the system was. I ended up weighing it, and it was 80 lb!

To empty the contents of the system I flipped it upside down in one of my worm trays, then unzipped the screen lid (which was on the bottom) all the way around. I had to pull off the Inn very carefully since the amount of material was quite a bit more than the tray could easily hold – plus I didn’t want to disturb the contents too much.

What was interesting to see, right off the bat, was that all the material around the outside was quite dry and a lot of it wasn’t very well processed at all. I definitely should have focused more on adding water around the perimeter. The overall percentage of unprocessed stuff was actually quite small though. Once I started pulling away the dryish layer I quickly started finding nice vermicompost. 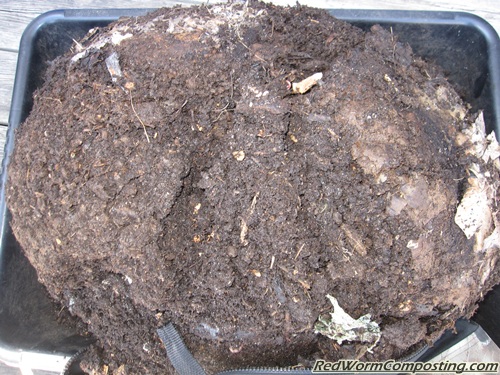 I was expecting to see layers of materials at different stages of decomposition as I went from bottom to top (with the original bottom material obviously being the closest to “finished”). What was surprising though, was the fact that much of the material in the system looked the same – well processed! All the way through the central core there was an especially nice looking pocket of rich worm compost, absolutely loaded with cocoons. The contents in general contained what was more than likely the highest density of worm cocoons I’ve seen in a smaller home system – even more impressive than the vermiponics bed.

The system was also loaded with Red Worms (surprise surprise!), and as expected they were mostly concentrated in the upper (well, technically lower since everything was flipped upside down) zone. I decided to see if I could concentrate most of the population using my souped up “light harvesting” method (see “Turbo Light Harvesting“). I recorded a video as I was getting close to the mass of worms at the bottom.

As I mentioned in the video, I didn’t bother trying to weigh them (and certainly wasn’t going to count them – haha!) – it was more for the purpose of simply seeing what sort of population I had in the system. As you’ll see for yourself (if you watch the vid), it was a pretty good gob o’ worms!

I ended up transferring all the worms to my big wooden worm box out in my backyard. The population in that system was already really high so it will be interesting to see how quickly food gets consumed in there now!

Before letting the worms go, I took full advantage of the fact that I had gobs of worms on hand (literally – haha), and took lots of pictures. Here’s a nice handful: 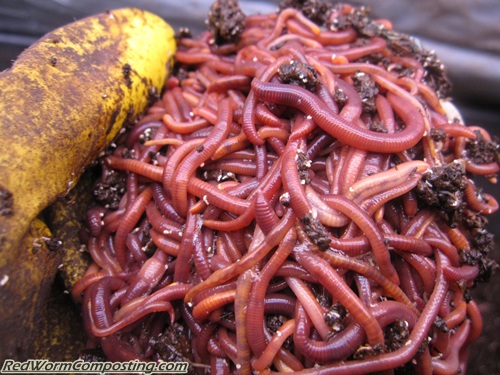 As I mentioned above, I will definitely be getting my Worm Inn set up again in the fall. I’m sure that between now and then I will be able to dream up some other way to test out the system (maybe it can be a new “Four Worm Reproduction” system or something like that). Whatever the case may be – I’m sure it will be fun, as always!
8)