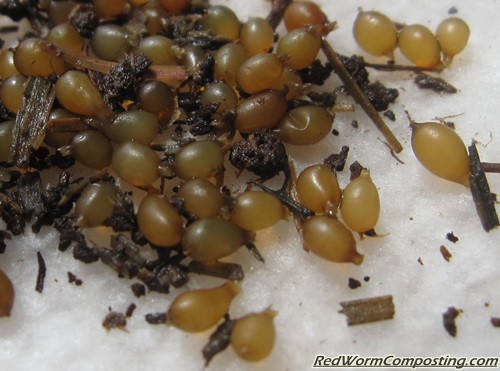 Today I spent some time collecting Red Worm cocoons (from some material I harvested from one of my outdoor beds) for my first worm cocoon hatching experiment. Last week I was wondering about the various factors that make cocoons hatch, and planned to start testing them out.

This first experiment is a bit of a combo deal. I want to see if cold temperatures can stimulate cocoon hatching, but I am also curious to see if the presence of some cantaloupe rinds will make a difference. Today I set up four small tubs filled with moistened egg carton cardboard. Each tub received 16 cocoons – two of them also received three small pieces of cantaloupe rind. Two of the tubs (one with cantaloupe, one without) went into the fridge, while the other two went into separate cupboards. 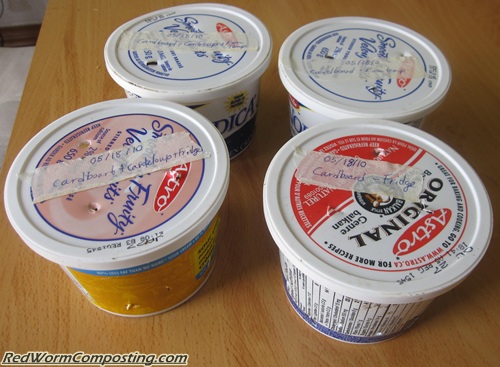 The cocoons came from an aged horse manure bedding, so I rinsed them very well in tap water. If at all possible I don’t want there to be any chemical factors from the manure that might affect hatching rates. I will definitely test aged manure as a “food” in future hatching experiments, but for now I’d like to limit the affect it might have. I guess I shouldn’t worry about it too much though, since all the cocoons basically came from the exact same type of environment.

For this first experiment I think I’m going to limit the time in the fridge to 3 days since I first want to determine if short periods of cold can stimulate faster hatching. In future experiments I will vary the length of the “cold spell” to see if that has an impact as well.

As you can probably tell, there are LOADS of potential variables to play around with here, so I may end up conducting these experiments for quite some time! Hopefully we will see some interesting results, and learn a thing or two along the way!