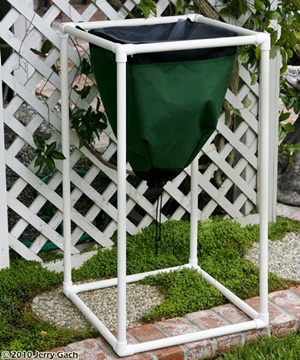 Those of you who receive the email newsletter will likely be aware of the fact that I’ve started a Worm Inn promotion this week (week of May 17, 2010). I know it’s not really “summer” yet, but it is definitely starting to feel like it in my neck of the woods these days, and who knows – perhaps I will let this sale run for awhile if people seem interested.

Since I began selling Worm Inns, I’ve really made an effort to draw attention to the fact that the Worm Inn does NOT come with a stand when you order it (I hate the thought of ending up with disappointed customers). I guess you could say this is one of the “limitations” of this system – but the fact is, the cost increase for including a full stand with the system just doesn’t make it a worthwhile thing to do – it makes a LOT more sense for the customer to simply make their own stand or buy a laundry hamper stand etc.

Well, I’m happy to report that NOW when you order a Worm Inn you will get a free kit to help you very easily build your own sturdy stand using PVC piping. The stand was the brainchild of current Worm Inn brand owner Jerry Gach, and is pictured above. The kit consists of the eight corner pieces (which are typically expensive and/or very hard to find) and 4 zip ties you’ll need to attach the Worm Inn. All you need to do then is buy three 10 foot pieces of 3/4″ PVC piping and cut them (or have them cut at the store) into four 36″ lengths and eight 18″ lengths. Stick everything together (you can use glue if you want, but according to Jerry it’s not really necessary), and away you go!

I am definitely going to be building one of these stands myself, and will likely be getting my Worm Inn up and running again a bit sooner than previously planned (in my last Worm Inn Journal entry I mentioned potentially waiting until fall). You know me and wanting to test stuff out for myself!
🙂

So, getting back to the ‘Summer Sale’ – basically, when you order a Worm Inn now (and until the end of the promotion) you will also receive the PVC stand kit free of charge (again – 8 corner pieces + 4 zip ties). Just so you know, Jerry charges $94-$101 (depending on your location) or so for a Worm Inn + kit on his own site. So you are looking at savings of close to $20 minimum.

All pricing (on the Worm Inn order page) includes shipping as always.

***Just so you know – if you are absolutely sure that you DON’T want to build a PVC stand (and thus don’t want the stand kit) simply drop me an email and let me know. I will create some special order pages for those going this route (pricing will be $10 off in this case). IMPORTANT – any emails you send about this sale should include “Worm Inn Sale” in the subject line.***

Here again is a link to the page where you can learn more about the Worm Inn and place an order if you chose to do so:
The Worm Inn – Continuous Flow Vermicomposting System

As always, if you have any questions/comments etc don’t hesitate to let me know via email, or by simply leaving a comment here!
8)