Interview with Jack Chambers – Part I 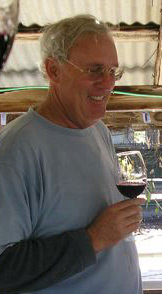 I first heard about Jack Chambers in a video called “Wine Country Worms” (purchased from Vermico), and remember being very impressed not only with his operation, but also with his warmth and genuine passion for what he was doing.

Since then I’ve read numerous articles and interviews featuring Jack and his Sonoma Valley Worm Farm, and eventually got into contact with him via e-mail. The one thing that stands out in my mind about those early e-mail exchanges was his incredibly friendly responses. He seemed to appreciate my enthusiasm for vermicomposting, and made a real effort to assist me with all my questions.

Not much has changed – when I reconnected with Jack this fall it was as though we had never lost contact at all. He just has a way of making you feel like you’ve been friends for years.

Needless to say, when Jack agreed to take part in an interview for the site I was honoured and excited!

As I mentioned in the last post, I’ve decided to split the interview up into a multi-part series due to the length of the responses I received back (thanks again, Jack)

Can you tell us a little about your background and what got you
into vermicomposting in the first place?

JC – The short answer is my love of gardening, and the desire to grow wonderful tasting, healthy produce without using chemicals. The long answer follows.

A friend of mine had visited the ‘Worm Farm’, and said ‘You need to go out and visit this place’. He didn’t really say much more than that. Being a gardener I sort of intrinsically knew that worms were good for the soil, but that was about it. I went out to the ‘Worm Farm’, and met Earl Schmidt who had been running the place since 1970. My first visit with Earl was in the summer of 1992. Earl was an interesting fellow from a small town in Minnesota, who had come to California to become a mink farmer. The mink business went to Russia, and Earl, who loved to fish, thought he would open a bait business.

The ‘Worm Farm’ had first been a small chicken ranch, built in 1959. It had 7 sheds that were 15′ wide, about 90′ long, with low ceilings and open sides. By 1970 the chicken business was gone, but there was a good supply of chicken manure still in the sheds. Earl rented the sheds and inoculated the rows of chicken manure with red worms. He slowly built up a bait business and over time had a nice little business going for himself. The fellow who had the chicken business sold the 5 acre parcel to Earl in the early ’70’s.

On my first visit with Earl I bought a 5 gallon bucket of worms for my compost bins. I went right home and put half the bucket in a bin of almost finished compost, and half in a bin that had cooled off, but was still pretty fresh. I then packed my bags and went off to fly a trip as an airline pilot, not even thinking much about the worms. I was gone for 5 days. The morning after I returned I went out to the garden and couldn’t believe my eyes when I looked into my two compost piles. Worms were everywhere! They had made the almost finished compost black and crumbly, and had turned the fresher material into a much finer looking compost. It was the transformational moment for me. I was hooked.

I went back out to the ‘Worm Farm’ and started just hanging out with Earl. I asked him if I could help him pick worms and just spend time with him. He seemed to welcome the help and I had a great time learning what I could about these amazing little red earth machines.

One day Earl and I were picking worms and I asked him what he liked to do in his spare time. He told me he liked to fish, but never had the time to go fishing. I turned to him and said ‘Then why don’t you sell me this place, and you can retire and go fishing?’. He said he would think about it and let me know. On my way home I thought to myself ‘what are you getting yourself into here’. I had a wife and two young daughters and we lived in a nice home, close to their school and here I wanted to buy an aging, some would say dilapidated, property that needed a lot of work. I guess you could call it blind love. I fell in love with the ‘Worm Farm’ and wanted to have a place in the country. I told my wife, an artist, that one of the outbuildings could become her studio and that we would fix up the house. Earl decided to sell the place to us, and my adventure as a worm farmer began.

I should also clearly state that I had no idea what I was doing, or how I would make this all work. My first inkling that I might have gotten in over my head was when our contractor for the house came down to the worm farm one afternoon and said “Dude, you have a lot of work to do down here.” Then he turned around and went back up to the house. He had no idea how right his words would prove to be.

One thing I would like to interject here is that I think having no background in the worm business turned out to be a good thing. It allowed me to see things with a fresh perspective and new ‘eyes’, so to speak. Mary Apelhof, a dear wonderful woman, had published ‘Worms eat my garbage’, and I thought that worms could have a future in the composting world. Ohio State University and Dr. Clive Edwards was just beginning to publish papers that showed the value of worm castings. So, I felt like I was on to something that might have a good future, and would help people grow better food.

I also found that my other job, as an airline pilot, helped me in ways that I would see later. In flying we do things in a very organized prescribed manner. We use checklists and have procedures memorized so that we can safely fly an airplane with people we have never met before. The discipline I found at the airline has served me well at the Worm Farm. That part of the story will realize itself down the road. I can’t emphasize enough how one career has enhanced the other.

This ends Part I of the interview with Jack Chambers – be sure to stay tuned for future installments.