Interview With Peter Bogdanov – Part I 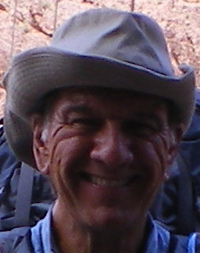 Unlike some of my previous interviews, I decided to keep this one under wraps until I posted it.
This is certainly not an indication of a lack of excitement on my part. On the contrary, when Peter agreed to take part several weeks ago I almost had to pinch myself to make sure I wasn’t dreaming. You see, Peter has (unwittingly) been one of my most important mentors – someone responsible for helping to vastly expand my vermicomposting knowledge and passion for the field in general, via his various information products (which I’ll talk more about in a minute).

Being the humble (and sometimes coy) guy that he is, I’m sure he would he would downplay the importance of his role in the industry over the years, but there is very little doubt that he has been one of the major players. Not in the usual sense, however. You see, Peter Bogdanov is not the owner of a worm farm or vermicomposting operation of any kind (not even sure if he has worm bins at home). He has positioned himself primarily as an information specialist and ‘connector’ within the industry, ever since bursting onto the worm scene back in 1996.

He is the owner of Vermico, a small worm business originally based in Grants Pass, Oregon (now in Arizona, if I’m not mistaken). If you visit the site you will quickly see that Vermico does indeed sell many of the products commonly associated with a typical worm composting biz, but it’s not (in my humble opinion) these goods that helped Peter make a name for himself in worm circles. It was his newsletter (Casting Call), his various books and manuals, and of course the major conferences he organized (and helped to organize). These are what had the greatest impact in terms of spreading the word about vermicomposting and vermiculture, and helping to unite and bring some legitimacy to an industry known for its secrecy and scams.

I personally own every issue of Casting Call, all (four) of his fascinating interview videos, along with a handful of his other manuals and books. The industry itself has changed a great deal in the short period of time since he released these products, but I can assure you that most of the information presented is timeless, and quite frankly a must have for anyone seriously considering the possibility of starting their own worm related business, or simply looking to expand their knowledge base.

Anyway…I don’t want to gush too much here, nor do I want to steal Peter’s thunder. Here now is the first half of my interview!

Could you share with us a little about your background, and how/when you became involved in the vermicomposting industry? PB – Unlike the major players I’ve known who were either dedicated field workers (i.e., ran their own worm farms), brilliant scientists or talented educators, my “credentials” were at the outset, frankly, rather shabby. I have to admit, shamelessly, I came onto the worm scene in the mid 90’s looking for a way to make a buck. Prior to the formation of VermiCo, (in what seems like a former life) I earned a master’s degree in Medieval and Early Modern European history, taught at the high school and college level, but devolved into a house painter in Southern California, before moving to Oregon to buy and turn residential “fixer uppers.” At one time I was the eviction king of Grants Pass! Then one day I heard from a real estate agent that an international banker was considering buying one of my properties to turn into a worm farm. That revelation sent me on a hunt to try to discover what a wealthy man might do with earthworms. Although I lived in Oregon, Southern California 800 miles to the south was vermiculture’s latest hot spot. So I jumped in my jitney, headed south and talked to sole proprietor worm farmers, vermicomposting and waste management gurus, and the infamous huckster Hy Hunter. In a relatively short time I met the movers and shakers of our ever-fledgling, never burgeoning industry. Since all the vermi heavyweights might easily fit into a normal-sized living room (and they all seemed to know each other as if they’d spent considerable time together in that living room) I was able to, in short order, network among the stars of the Worm World. I found them to be the most gracious, authentic and deeply committed people I’d ever met. My life has been tremendously enriched through my association with those about whom you will read in my newsletters and learn from in our other media. I owe the very existence and any success of our tiny cottage business to the couple dozen or so earthworm colleagues who allowed me the privilege of working with them. After 10 years and 60 fantastic issues, the last ‘Casting Call’ was published in April of 2006. What led you to decide to shut down the newsletter?

PB – To paraphrase Twain, “The reports of my newsletter’s death are greatly exaggerated.” However, the reports are not entirely without substance. Let’s say the patient is languishing on life support. Admittedly there’s been a long hiatus since the last issue, but we’ve not thrown in the proverbial towel. Why the lengthy interlude? Dozens of reasons, among which is the fact that so many of our Super Stars fell into a black hole. While all of Hank Williams, Junior’s rowdy friends have settled down, mine have simply disappeared. If you believe in resurrection as I do, it’s not entirely without hope that the patient may be resuscitated someday. But so also would some of our industry’s MIAs.

You are definitely someone who has had a unique vantage point from which to observe the vermicomposting industry during the last 12 (or so) years. I’m sure you’ll agree that a lot has changed during that time. Can you share with us what you feel some of the highlights and low moments have been?

PB – The highlights are really too numerous to itemize. By listing some, I’d be chagrined to omit others. But because I don’t want to evade the question I’ll take a swipe at a brief though inadequate answer. Mary Appelhof’s Vermillennium of September 2000 was, without question, an international watershed event of historic consequence. Additionally, the corpus of Dr. Clive Edwards’ lifelong work and scientific leadership stands as the rock-solid foundation of all that we know and believe. Without Clive and Mary’s contributions, the state of US and international vermiculture might be described most accurately as Paleolithic. A personal peak occurred in March 2001 on a Sunday in Portland, OR when nearly 250 people showed up for a one-day conference we sponsored featuring 14 speakers, each of whom had only 20 minutes for his or her gig. On that day, we had attendees show up from as far away as Argentina, Switzerland and Israel who had no prior contact with us. These folks simply read about our conference on our website, hopped on a plane, and showed up without pre-registering or inquiring if seats were available! I was blown away! More than anything else, that incident showed me the power of the internet to move people to action. There is no question in my mind that VermiCo would not exist without the internet. We became a new style “worm business,” solely through a technology that has only been around a couple decades.

Negatively, our industry’s credibility has been repeatedly and savagely assaulted over the years through malicious attempts at outright fraud. Whereas we once feared the planarian “flatworm” as a dreaded predator of E. fetida which, at one time, was thought to pose a major threat to our industry, far greater damage has been inflicted on thousands of honest (yet tragically gullible) people and upon the future of vermiculture through the unremitting deception of crafty swindlers. I believe the blame for the mass exodus of the “best and brightest” from our industry may be laid squarely at the feet of those who’ve peddled millions of dollars of worthless worm buy-back contracts to thousands of naïve “investors” whose own greed led to their financial ruin. Incalculable carnage has been the result. To put a human face on this, I recall one of my most memorable conversations, held with a commercial truck driver who called me from his cell phone while he was on a road trip. He had a gut-level feeling of gnawing insecurity about parting with $50,000 to buy a worm buy-back contract, but he hated driving truck and his lower backache was just killing him. I urged him to arm himself with information before he gave anyone any money at all. I pleaded with him not to give me or anyone else any money—“Just go out there and see what you can find—but don’t buy that contract!” In spite of all I tried to do to dissuade him, I couldn’t get him to hang on to his wallet. His last words to me were, “Well, I guess I’ll just max out my credit card and buy a contract from that salesman and send you some money for your book.” Afterwards I think I just put down the phone and wept.

Stay tuned for the second half of our interview with Peter Bogdanov!