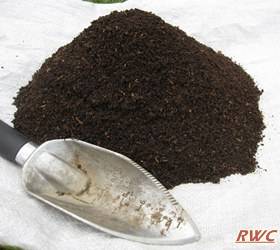 All these years I’ve assumed that it was solely the “magic” of the vermicomposting process that made me so passionate about (some might even say “ADDICTED to“) this rather odd field of endeavor. Well, now I’m not so sure.

Thanks to a posting (from Daniella M.) on the Red Worm Composting Facebook Fanpage recently, I came across a really interesting article all about how a particular bacterium, Mycobacterium vaccae, can trigger the release of seratonin in our brains, helping to us to feel…well…happier!
🙂

This particular microbe is among the those in the group known as the “actinomycetes” – bacteria that exhibit some of the same filamentous growth habits of the fungi. This is also the same group of microbes responsible for that oh-so-sweet-earthy smell of rich soil and compost.

Now it’s all starting to make a bit more sense isn’t it? I mean seriously, who HASN’T smiled after taking a big ol’ whiff of a (good quality) vermicompost?!

Here are some excerpts from the article (link to follow):

The drug-like effects of this soil bacteria were discovered, quite by accident, about a decade ago. A doctor named Mary O’Brien created a serum out of the bacteria and gave it to lung-cancer patients, in hopes that it might boost their immune systems. Instead, she noticed another effect: The hospital patients perked up. They reported feeling happier and suffered from less pain than the patients who did not receive doses of bacteria. Further studies in mice confirmed the mood-boosting effect of the soil bugs.

As I huff the soil, I have no way of knowing exactly how much M. vaccae is floating into my lungs — or whether it’s enough to change my mind. But I can sure smell this compost. The odor hits like a punch and triggers a memory: I recall a day in Western Massachusetts on a friend’s farm, turning earth with a pitchfork. Dried mud extended up my arms, like a pair of long-sleeved gloves, as if I were dressed for a gala event with forest-fairies. I felt dazzled that day, boozed up on sunshine, and in love with the potatoes I’d just dug out of the soil.

That same smell hovers over this dish now — a sexy, outdoorsy tang. It’s an odor produced by microbes in the soil as they break down plants. Scientists call it “geosmin,” this dirt smell that lends the earthy taste to beets and carrots. It’s the flavor of life.

Be sure to check out the full article here: How to Get High on Soil (I recommend following the links in the article as well).