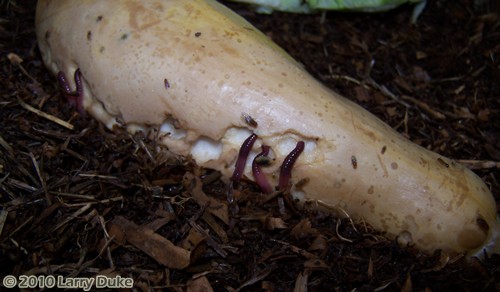 I wish I was an Oscar Mayer weiner,
But I’m def-in-ite-ly glad I’m not a squash!
😆

A BIG thanks to Larry D. for sending along this crazy (creepy) picture of Blue Worms (Perionyx excavatus) feasting on a squash in his bin. I’ve actually been meaning to write more about these worms for quite some time now but…well…you know the drill. (lol)

Here is what Larry had to say about the picture:

This picture is of PE’s eating a squash.Some people get confused as to worms not having teeth means they can’t eat solid food.These PE’s will create suction some how.When thier head goes real blount looking,they snatch off a piece of squash.This picture is taken during the day with my bin open outside in the shade.They love the surface,and don’t let indirect light discourage them from a good meal.You can tell by the groove they made,they like squash. 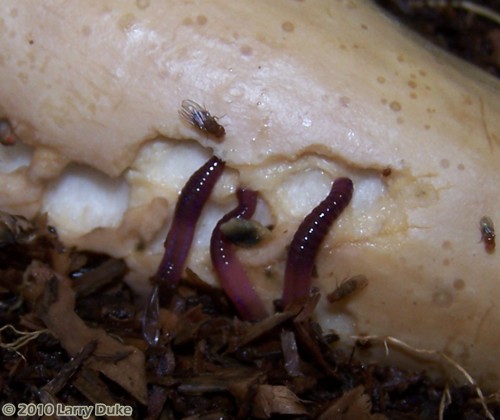 I’ve played around with this species for long enough (several months) to reach the conclusion that I’m not a fan. Let’s just say that I won’t be starting up the website “Blue Worm Composting” any time soon! – they just give me the willies (haha), and they also tend to have a temperamental streak. They move like lightning, and don’t seem to be nearly as put off by light as Reds (especially when they are feeling unsettled). I’ve actually read cases of them being found up in trees and on top of tall buildings (not to mention traveling long distances) during rainy weather, and certainly witnessed some pretty kooky behavior myself.

If you want a worm that can quickly (and effectively) process waste materials, though, Blue Worms are top notch (the pictures say it all). Some of you (long-time followers) may recall the interview I did with Dennis Copson (Nature’s Big Bud). He only uses Blues (after switching over from Red Worms) and swears by them!

The KEY requirement, however, is warmth! These worms will drop like flies once temps get down below 10 C (50 F) or so – helping to explain why I no longer have them!
{insert evil laugh}

As you can see in the pics, one of the distinguishing features of Blue Worms (also called “Malaysian Blue Worms” and “Indian Blue Worms”) is the blue/purple sheen. Larry’s specimens seem to exhibit this quite nicely. In my experience, they can look a fair amount like Reds at times (or at least a bit duller in color) so it’s best to rely on some of their others morphological features and characteristics. One of their nicknames is “Spike Tails” – when I first heard this I had visions of little sharp spines sticking out from their tails, viciously slashing innocent vermicomposter fingers if they came too close (wouldn’t put it past them!!! lol), but I came to realize that this is more than likely due to the spike shape of their body. They tend to be thin and pointy in comparison to some of the other main composting worms. Another key feature is the location of their clitellum – up very close to their mouth, as compared to Reds (further back, with thickened head region). 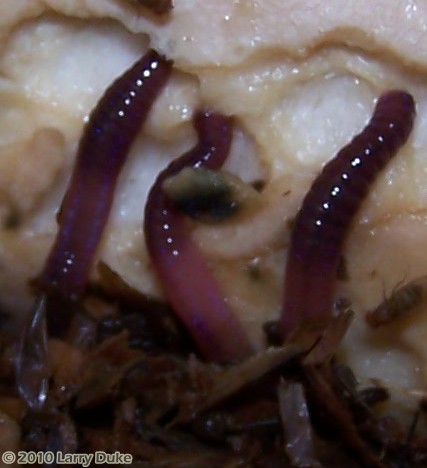 The movement of Blue Worms tends to be unique (and CREEPY) – apart from moving incredibly quickly it almost has an “inch worm” quality about it – mostly concentrated up in the anterior end (Reds seem to use more of their body).

Blue Worms have become something of a worm farming “pest worm” over the years. During hot weather they can sometimes invade Red Worm beds and expand their numbers quite quickly. As such, it’s not all that uncommon to end up with some in your Red Worm systems – what can be really frustrating, though, is the fact that some suppliers out there seem to have no qualms about selling “Red Worm” cultures that are almost entirely Blue Worms. Not so bad if you live in a warm location and are happy to create some worm compost – but pretty depressing if you live in a cooler location and end up with a dead worm population once the mercury starts to dip!

By the way, I happened to find one of Larry’s videos on YouTube today while looking for interesting footage for this post. Here is a vid demonstrating what can happen as a result of rainy weather.

Speaking of rainy weather – this is another interesting topic on its own. Blue Worms aren’t the only ones that seem keen to roam during wet weather. I’ve seen plenty of Reds doing this as well. Is it moisture? Is it the drop in pressure? Hmmm….we’ll have to explore that topic at some point!

Anyway – enough of an eyeball-full for now. Thanks again to Larry for the pic (and the video).
8)