RWC reader, Jackie “Grammie” Wolverton, recently sent me a really nice shot of some material from her worm bin. She had come across some interesting capsules and was wondering if they were worm cocoons.

I asked Jackie if I could share the photo here on the site, since I knew others would benefit. She happily obliged.
(Thanks again, Jackie) 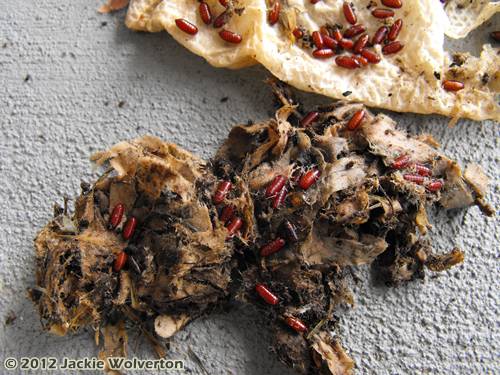 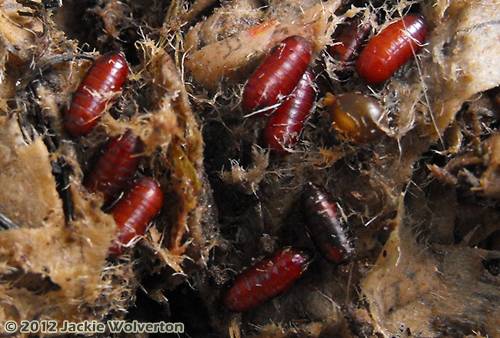 As I explained, these are actually fly pupae, not worm cocoons. In the close-up (I created using a photo editor) you can see what an empty worm cocoon looks like in comparison. They (cocoons) tend to have more of a rounded tear-drop shape, and range in color from yellow to dark brown (when close to hatching).

There are various types of flies that can lay eggs in a vermicomposting bin – the house fly typically being the most common, especially when a bin is indoors (or at least semi-indoors, such as in a garage). Before you find these capsules, however, you will almost certainly find an abundance of white maggots in the bin.

House flies tend to be more attracted to smelly waste materials (like rotting meat), but I don’t doubt that they would invade a worm bin if that was the best “food” option they had available.

It’s important to note that there is also a fly called the “Stable Fly”, which looks like a house fly and produces similar pupal capsules as well. It actually seems to have a much greater tendency to invade the sort of waste materials that could be found in a worm composting bed. I’ve found plenty of them in aged manure and coffee grounds, for example. You’ll know you have these guys (as opposed to regular house flies) if they land on you and bite you! lol

Anyway – thanks again to Jackie for sharing!
8)