Worm friend and fellow Canadian, Lorne G., shared his winter worm bin set-up with me about a month ago. I had meant to post something about it here, but just didn’t end up getting around to it. Not too surprisingly, Jess’ recent email (which inspired “Jess’ Winter Worm Bin“) reminded/motivated me to get back in touch with Lorne to see how things were coming along.

I’ve included his original message (with images), along with his more recent follow-up:

I’ve emptied the worm bench* for the winter. Everyone has been moved into my garage. The worms are now in a plastic container with a circulated water heating system. There’s 40′ of hose holding 2.5L of water that is heated with an aquarium heater set to 22’C (71.6 F). There is a very small fountain pump that circulate the water. The system was tested before the worms were moved. I haven’t turned it on yet as the bin is still at a decent temperature. My garage does get below 10’C (50 F) so I will be turning it on in a few weeks. 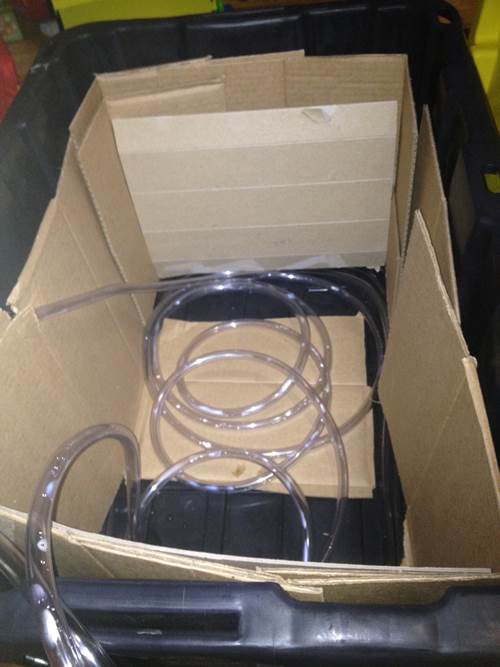 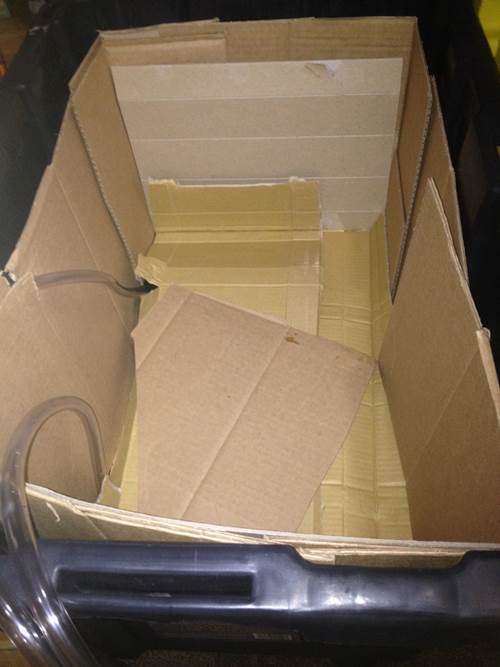 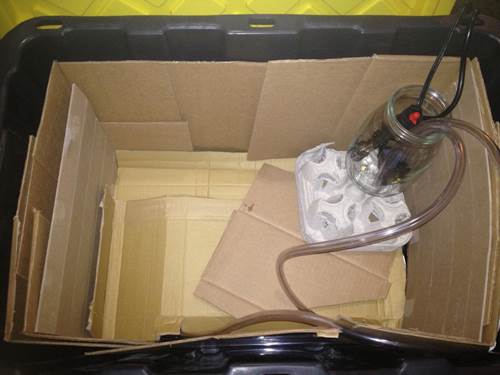 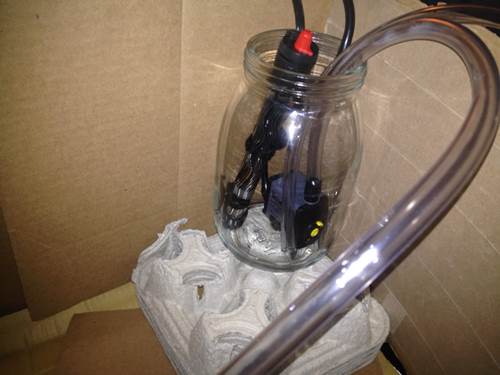 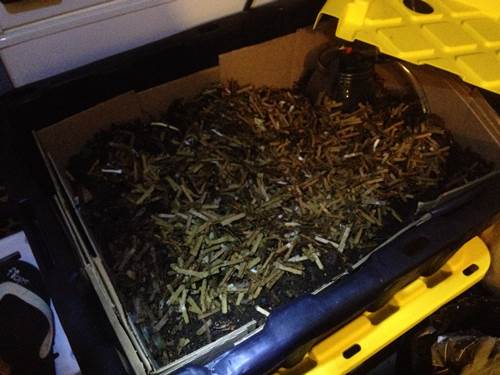 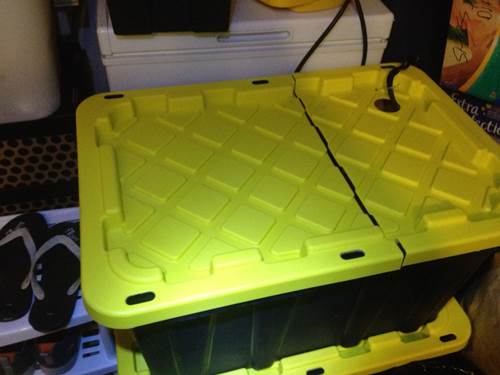 I’m pleased with my new bin. It is stacked on top of another bin just like it that is full of gardening supplies. It’s a $12 storage bin from Home Depot. I drilled a hole in it for the electrical cords for the pump and heater. I also cut the lid of the bin into two sections so I wouldn’t need to disturb the cords when I want to access the bin. I have found that the red wigglers are very exploratory. They manage to climb up to the underside of the lid. I have other stuff on top of the lid so they can’t crawl into the lip of the lid. But I have to be careful when I do lift the lid. The first time that I lifted the lid, more than 20 reds fell on the floor. Since the contents have settled, there were only three explorers on the underside of the lid tonight. There was a bit of condensation on the inside of the lid too. I’m not too concerned yet. I have cardboard walls that are still dry. Once they become saturated and if there is still excess condensation, I will punch more holes in the lid.

I haven’t really been giving the worms that much by way of food scraps. Now that their environment is more mature with bacteria, I will start feeding them more.

The bin is doing great. It’s in my unheated garage. I have it stacked on top of another bin so it isn’t on the cold concrete floor. The pump and heater are plugged into a power bar that is plugged into a timer. The heater runs all night and for one hour mid morning and one hour mid afternoon. I’m trying to be conscious of my electrical use and I’m avoiding peak rate times. Using this regulatory system, the bin maintains a temperature around 16’C (60.8 F) at a minimum, going up to 20’C (68 F). The garage has an ambient temperature around 6’C (42.8 F). I monitor the temperature using a laser thermometer that I bought off eBay for less than $20.

There is adequate moisture in the bin. There is always condensation on the inside of the lid. Not as much as there was when I initially moved the worms indoors. But there is no sign of the bin drying out. I also have a perimeter of cardboard sheeting that will show me if the bin is getting dry.

There are always baby worms exploring the bin. Both kinds, euros and reds. And the adult worms always look fat. Every time I rake through the bin to add more food, I find oodles and oodles of worms. They really seem to make melon disappear quickly. I found a piece of avocado skin the other day that was added during the summer. And there’s a broccoli stem that appears untouched. I’m lazy and refuse to make a special point of preparing my food scraps for the bin. It goes in as I have it. I thought about pulling out the broccoli stem, but it’s been in there so long that now I want to see how long the bin will take with it. But then again, it might be treated with pesticides and that is what is keeping it from breaking down. “Organic”

I’m really pleased with this set up. It’s working very well. Food scraps are getting processed faster. I think that the consistent temperature and humidity have a lot to do with it. That, and I’m comparing to a brand new bin that didn’t have a bacteria rich substrate. I will do another outdoor wooden bin. But I will use a significant amount of material sourced from the indoor bin. I think that wooden bench* v.2 will be much better than the first.

Thanks very much to Lorne for letting me share his winter worm bin set up! Hopefully we can check back with him to see how things are coming along in January or February (when it gets REALLY cold around here).

* Lorne’s “wooden bench” system was another really cool DIY bin he set up (I have actually meant to write about that one as well) which, as the name implies, served as a backyard bench and as a vermicomposting system.

Seattle and the Mystery of the Disappearing Red Worms