Thinking about how to kick things off with my Urban Worm Bag 2.0, I knew I needed to come up with something different.

I asked for feedback from the Red Worm Composting Facebook community – mentioning that I had been toying with the idea of a (compostable) cat litter experiment – and received some great feedback/ideas.

In the end I decided that’s what I was going to do (and will be using some of the suggestions people had for making it a bit more “worm-friendly”).

When I told the worms about my idea, they weren’t quite as excited about it as I’d hoped. Below is a dramatic re-enactment of the conversation (thanks to Will Ferrell and Fred Armisen for agreeing to help out on such short notice!)
😆


In light of this rebellion, I have decided to only use worm cocoons to stock the system.

Another twist is that I won’t be using any shredded cardboard (my go-to bedding material for virtually all smaller systems). Instead, I will be using mostly wood chips (which do at least have some shredded leaves mixed in as well) and stove pellets. Some well-aged, dry-ish horse manure will also be used to help make sure I don’t end up with any bad odors. 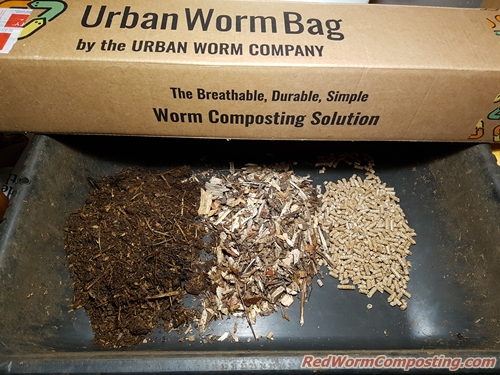 The compostable kitty litter I use is chick starter feed. Really awesome stuff (works very well as a clumping litter, and is relatively inexpensive), but obviously pretty high in protein (and thus nitrogen). Not a great way to balance out the high-N of the urine and cat poop. FB group all-star, Erin May suggested just using the poop, not the urine clumps – and I think this is great advice, especially for an enclosed, home-scale bin like this.

Previous systems where I’ve dumped everything in were larger outdoor systems, exposed to the elements. The worms were allowed to move into the material on their own (beds were never even stocked with worms).

I have started collecting just the cat poop (with small amount of loose litter) and layering it with wood chips and a small amount of aged manure in an old cat food bag (which has a plastic liner inside). Hopefully I don’t get it mixed up with the cat’s regular food bag! hahaha 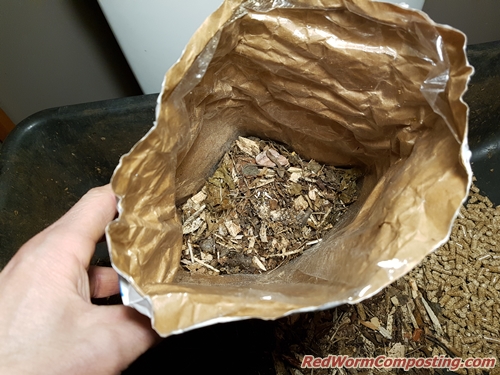 This will provide a bit of a “pre-composting” phase for the material – hopefully making it even more inviting for the worms.

Speaking of of the worms – part of the reason I want to use cocoons is that it means the worms will be born into this system, likely helping them to adapt even more easily to the conditions and food source (not that I’m all that worried, especially with no urine clumps in there). And I think it will just be fun watching the population develop over time.

Hoping to get this system started a bit later in the week (as I type this on Dec. 10th). Should be fun!

Let me know what you think in the comments section below.
😎

WARNING: Adding cat (or dog/human) feces to a typical indoor worm bin is NOT a recommended practice, especially if you are fairly new to vermicomposting! I have nearly 20 years of experience and this is intended primarily for “entertainment purposes” only. Various precautious (eg wearing gloves) will be taken, and any vermicompost produced in this system will be used for ornamental plants only.

Slow Progress with a VermBin48