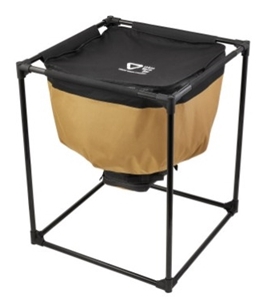 Sadly, it has been nearly 5 months since I last wrote about Urban Worm Bags! It was bit of a weird/interesting summer (to say the least) – and I was pretty focused on getting an exciting new project off the ground in the fall.

In the meantime, Steve has gone and launched a brand new version of the UWB! As I’ve mentioned before, Steve is not happy with just making a “great” home vermicomposting system – he wants the UWB to be the best option available for home vermicomposters. And that means listening closely to customer feedback, and continuing to make design improvements.

I am definitely excited about the improvements he has rolled out with version 2.0! 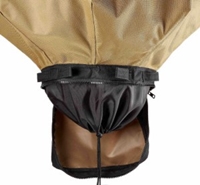 One of the features I missed while working with my first UWB (1.0) was the drawstring opening at the bottom – a feature I really liked in the Worm Inn.

The zipper pocket at the bottom of the UWB was fine – and I didn’t actually end up having any issues with opening/closing mine (although, it’s important to note that I mostly left it open for air flow). But some customers reported it getting gunked up and difficult to work with.

Steve decided to create the best of both worlds – a drawstring opening inside of the zippered pocket! I think this is a fantastic upgrade (and I’ll likely just leave the lower pocket completely open). 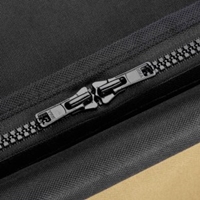 Another new feature is a double zipper in the UWB lid.

This might not seem like a big deal, but I am very happy to see it added!

My last UWB sat in a corner, and it was a bit of a pain having to reach over and bring the zipper tab all the way around just to open it.

I am still holding out for a screened lid, though! Maybe Steve would even consider an inner screened lid with the main lid over top! (A guy can dream, can’t he?)

Last time around, I ended up leaving my lid partially open most of the time to help keep things a bit drier (which will actually now be easier with the double zipper). 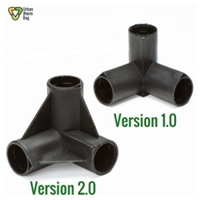 I was very impressed with the metal stand that came with my original UWB.

It was surprisingly sturdy and didnt have nearly the same wobbling I encountered with a Worm Inn Mega on a PVC stand.

Nonetheless, some customers encountered issues with the corner pieces failing (likely at least sometimes due to setting the system up on an uneven surface), so Steve decided to upgrade them.

A couple of other new features worth noting:

1) Slightly Taller Stand – I’m happy about this since I personally found the bottom of the bag to be too close to the ground (a bit more challenging to remove material from the bottom). In Steve’s defense, it is definitely important to keep the stand on the “short” side for stability (lower center of gravity).

2) Holding Tabs for Lower Zipper – A small, but well-thought-out improvement, these tabs give you something to hold on to as a way to counter the force of opening the bottom zipper. This should make it easier to open the zipper, and help to avoid excess swaying of the system.

As I type this, I am gearing up to finally get my own UWB 2.0 up and running – for a project you might say is the “cat’s meow”! haha

I am also holding a very special holiday sale for the new Urban Worm Bags (thanks again to Steve for helping to make it possible) – so now is a great opportunity to buy one or more!
😎