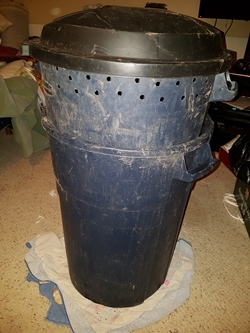 Now that the Walking Windrow bed is basically set up and “ready” for winter (apart from some ongoing bulking-up and feeding) I have a good opportunity to “play” around a bit – testing out different things etc.

One thing I had planned was to try installing some small “compost chimneys” to help get more oxygen down to the lower reaches of the worm habitat zone (which will help with microbial heating, and speed up the processing of materials in the bed).

This got me thinking about “worm towers” (what the chimney pipes were originally used for)…which got me thinking about worm “feeding buckets”. Concentrating lots of worms will be advantageous once my business opens again in the spring and, just generally, I think it will be really fun to test out different mixes and see which ones attract the most worms.

I remembered that I still had the big “holey bin” from my “Vermi-fertilization and Watering System“, and this got me thinking about creating some form of jumbo food waste bin I could keep inside.

Naturally, I didn’t want to just have a food storage bin full of holes sitting in the house, so I came up with the idea of a double bin system. The outer bin would have a thick false bottom to help wick up moisture, and to prop up the inner bin (which would help to promote air flow). The inner bin would contain all the food wastes and other materials.

Part of the reason I was really excited about the idea was because I knew it would be a great opportunity to experiment with the (bountiful supply of) wood chips I have free access to out at the country property (the WWP site). I figure, with enough chips mixed in the bin might even double as a sort of chimney since air would likely move more easily through it than other parts of the bed.

We’ll chat more about various possibilities and my actual plans a bit later on, but let’s now look at how the was set-up. As touched on, stage one involved getting the outer bin set up with a false bottom. I wanted this to be full of relatively bulky, resistant materials – but figured it wouldn’t hurt to have a “living” component as well.

I got things started with lots of “scrunched” white paper, shredded cardboard, wood chips and some stove pellets. 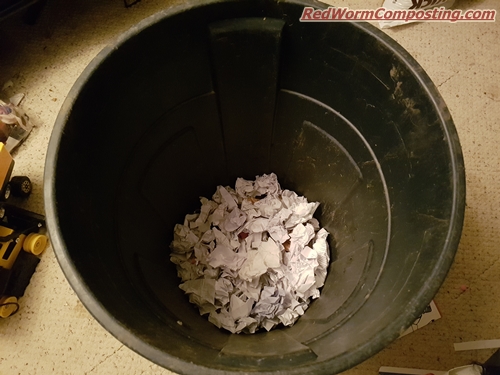 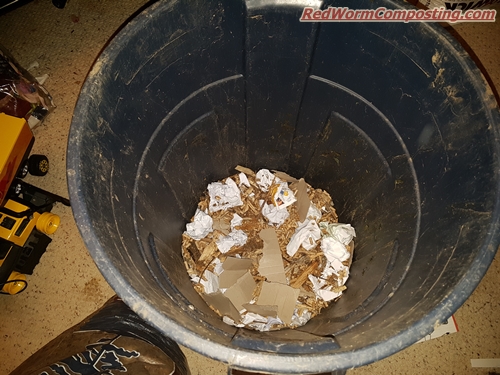 Next I added some aged horse manure, along with a cover layer of newsprint. 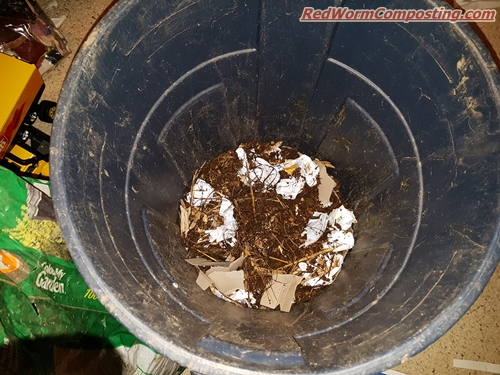 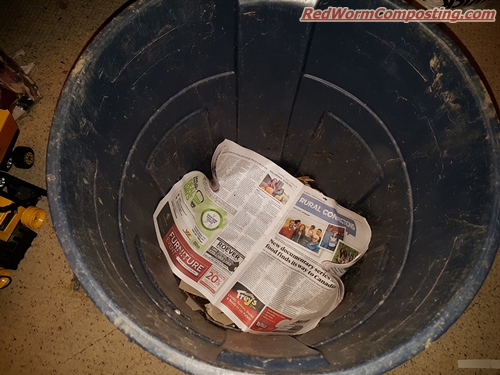 I figured that was enough for the false bottom (learned later that it wasn’t quite enough – but we’ll get to that in a minute), so I moved on to the set-up of the inner bin.

The process was actually quite similar – with the exception of the food scraps. I first put down some shredded brown paper (and likely shredded cardboard), plenty of wood chips, stove pellets and aged manure. 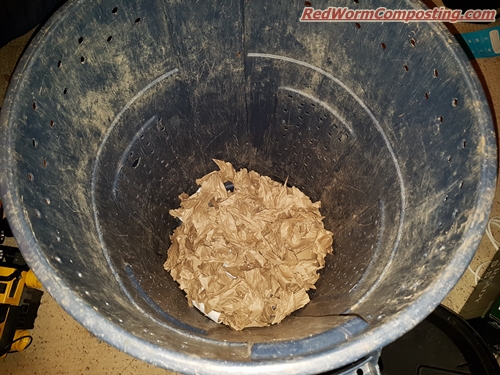 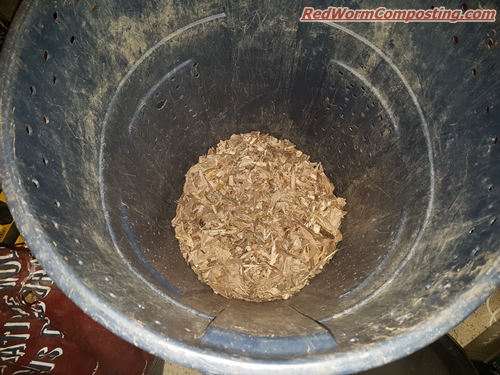 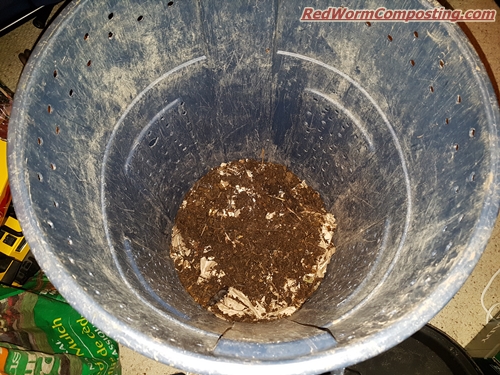 Then I added my first big bag of food scraps. This one had first been frozen, then moved out onto the deck (when I needed to put another bag in the freezer), where it thawed out some (weather has been bouncing above and below the freezing mark a fair bit in the last week or two). 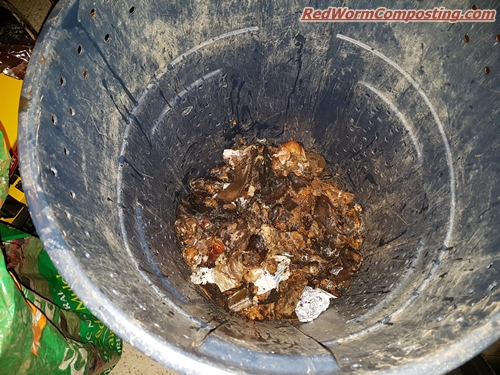 Then the same basic layering approach was repeated all over again – this time using a big bag of food waste that was frozen solid. 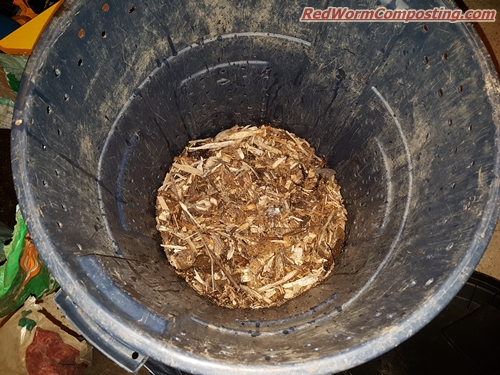 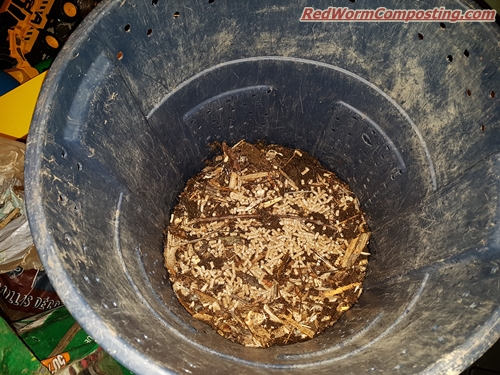 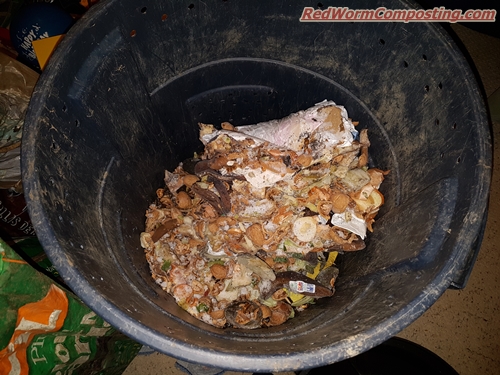 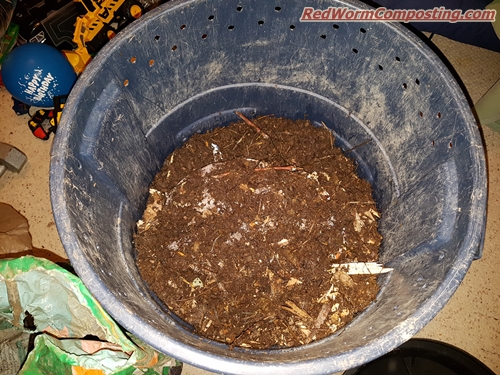 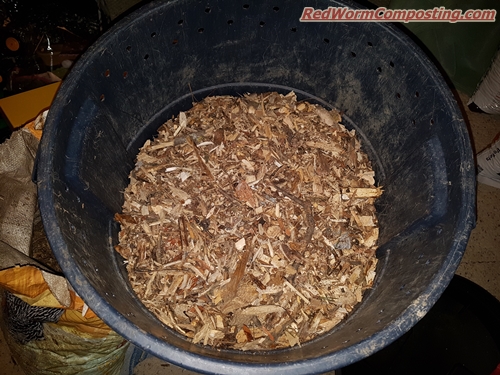 It should be mentioned that the food mixes themselves were actually pretty bulky, with plenty of shredded cardboard etc, and loads of walnut shells.
I finished things off with a nice thick layer of wood chips (and it’s also worth noting that there were more chips added along the way than is obvious in the images).

Later that same week I decided to add one more big bag of food scraps – this time it was a bag that came straight from my scrap holding bucket under the sink (no freezing). It got mixed with aged manure, wood chips and stove pellets before being covered with a nice thick layer of the wood chips. 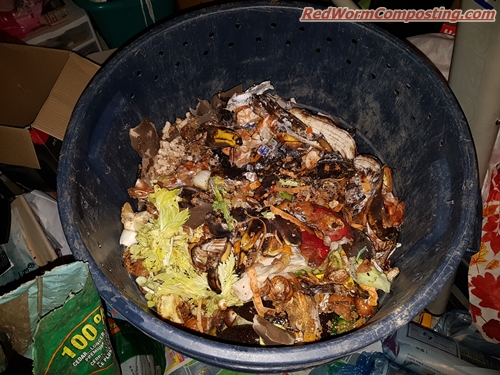 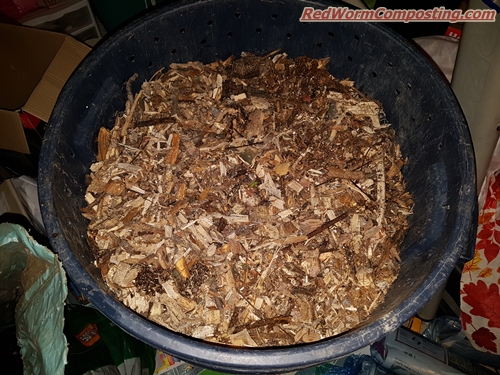 If I had to guess, I would say the total amount of food scraps added to this system was about 30 lb. As alluded to earlier, after my 3rd food deposit I realized my false bottom wasn’t deep enough when the two bins ended up tightly wedged together. With some help from my dad, I managed to get them pulled apart, and I remedied the situation by pouring a lot more wood chips (which offer more support than scrunched paper or cardboard) down in the lower bin.

I just can’t say enough good things about these wood chips! Not only are there zero bad odors – the bin actually smells really nice due to the chips. It is a mostly-hardwood mix, but I suspect there must me some softwood chips in there as well based on how aromatic it is.

People often wonder how to effectively stock-pile food scraps at home. Well, clearly a bin like this (with similar set up) offers a great option – and you’ll even up with some awesome worm food mixes (somewhat like the “homemade manure” mixes I used to make)! The volume reduction wouldn’t be nearly as rapid without worms in there (yet another possibility if you wanted a large worm bin with a fairly small footprint), but my hunch is that I could continue adding more scraps over time if I wanted to.

As you might have already guessed, my one BIG caveat about this type of bin is that it’s probably going to get really heavy. Mine was totally fine after two food deposits, and I’m sure I would be able to lug it upstairs and out the door even now – but it might be pretty unmanageable for a lot of people. As such, my suggestion would be to try it out with smaller bins, to keep it in a spot where it doesn’t need to be moved, and to frequently test out the weight of it.

If used as a worm composting bin I think it could end up especially heavy over time – but maybe it’s something you could even keep outdoors in a sheltered location (depends on your climate though).

Regarding my own plans…

Now that it looks like I might have shrews in the Walking Windrow bed, I am especially interested in the idea of installing bins like this (obviously just the inner bin with the holes). Not only will it be neat to see how many worms I can concentrate, but it should also serve as a way to protect a lot of the worms from the shrews (but ya never know – they may figure out a way in).

Hoping to get this one installed tomorrow.
Stay tuned!
😎

(And please consider joining the Walking Windrow Follow-Along, if you want to learn even more about these fun various experiments!)