Things have continued to chug along with my Urban Worm Bag in the (nearly) 3 weeks since my last update.

I actually didn’t end up adding any food during this period – until today (more on that in a minute). This is one part “laziness” (aka focus on other things), and one part limited supply. It has become pretty clear that the system could easily handle our total kitchen scrap waste stream, and then some.

I’ve used up the bags of frozen scraps I had in my basement freezer, so now it is a matter of waiting until my holding bin (under sink) is full, letting the scraps freeze for a period of time, thawing them out, then feeding.

From a waste-handling perspective, I suppose it’s one of those “good problems to have”.

The worm zone currently feels pretty overloaded with bedding at the moment, so I definitely want to tweak things a bit in coming weeks. But the worms themselves seem to be doing well – and it’s pretty clear there are loads of them in there! 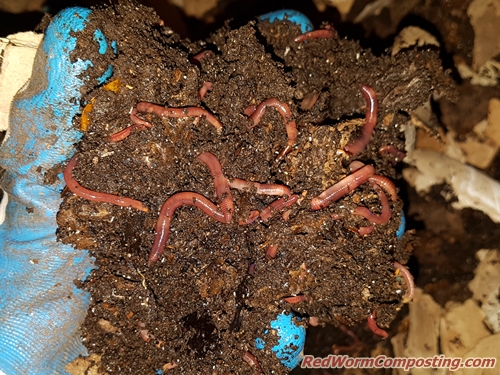 Today I added 4674 g (10.3 lb) of frozen-then-thawed kitchen scraps. Continuing with my “lazy” trend, I basically did nothing to optimize the mix any further (previous feeding sessions usually involved some additional chopping and mixing with living materials ahead of time). Well OK – I didn’t just leave it in a big ball – I spent some time mixing everything around so as to get things oxygenated a bit. 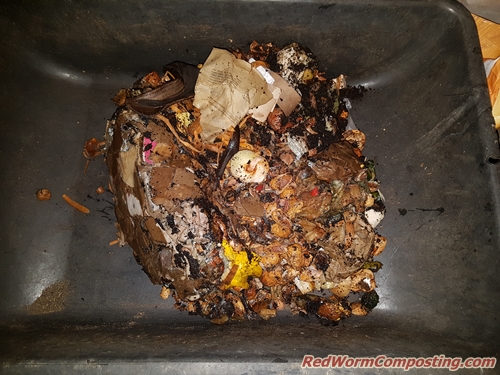 Adding the food was a basic process of clearing a depression on one side, dumping the scraps in, mixing it with bedding and living material already in the system, then covering over with additional bedding materials. 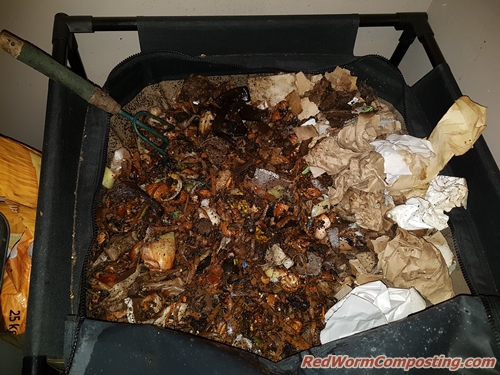 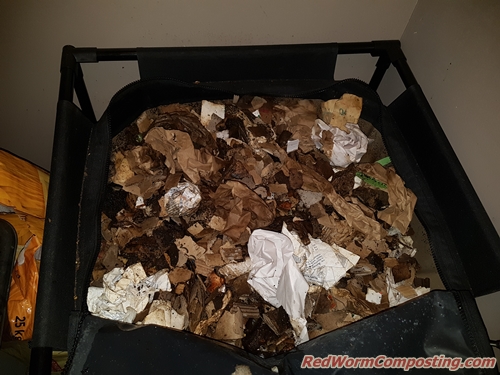 Getting back to my potential “tweaks” – I would definitely like to add some aged manure (if I get my hands on some) and likely some comfrey to see if that helps to accelerate things a bit.

I am aiming to perform my first harvest maybe sometime towards the end of June, or early July.